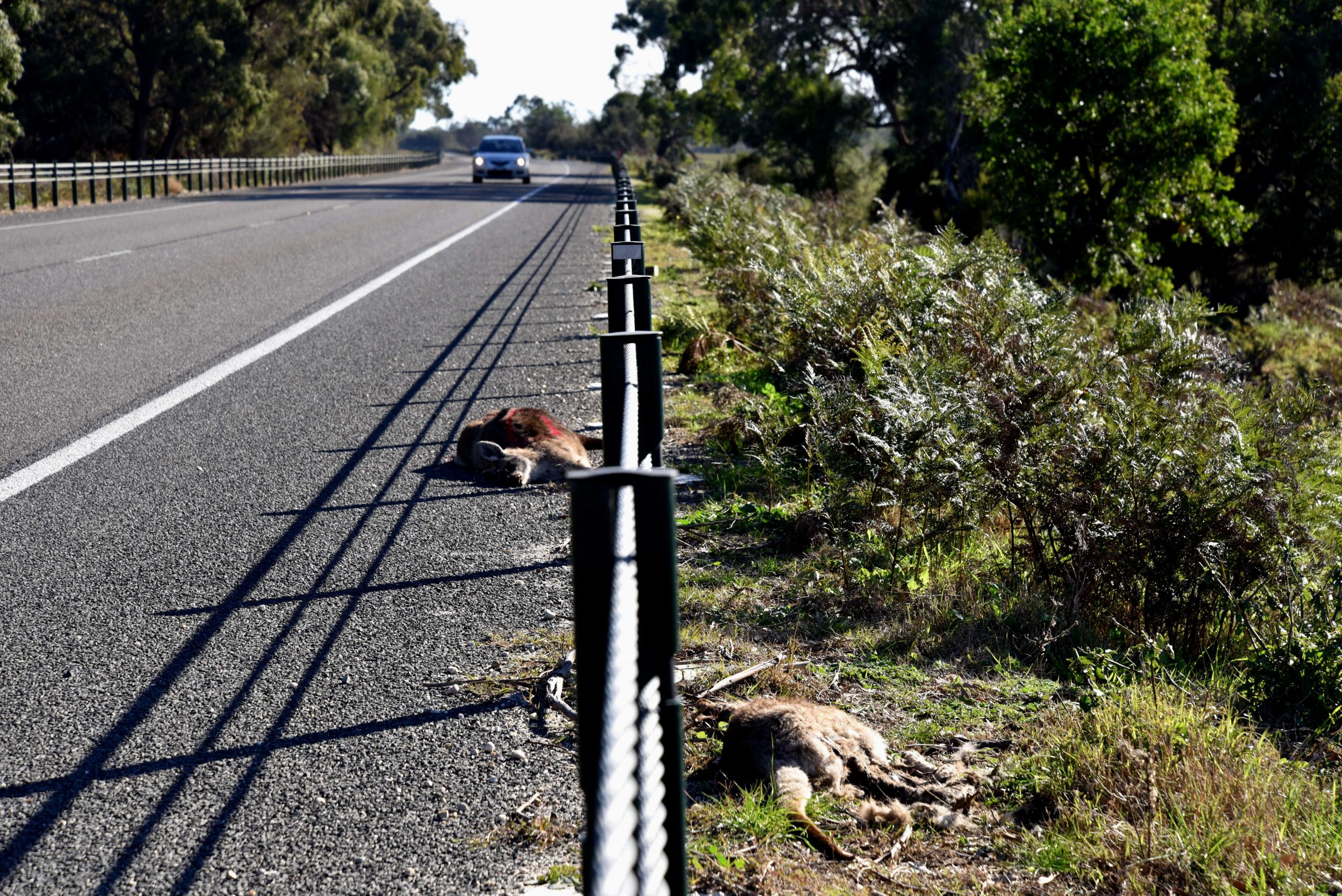 LOCAL residents are calling for speed restrictions and better signage on a treacherous section of the Longford-Loch Sport Rd at Dutson Downs because of the growing number of kangaroos they say are “lured” to their deaths by roadside barriers and new high fences.

Dubbed ‘Slaughter Lane’ by locals, the section of road near Gippsland Water’s Soil and Organic Recycling Facility at Dutson Downs has long been a route used by wildlife to cross the road and feed in nearby paddocks.

But wire rope barriers on both sides, as well as new, higher-than-usual fences around the adjacent Gippsland Water property, means native animals trying to access their familiar feeding grounds have nowhere to go and are being turned back onto the road.

When the Gippsland Times visited the site on Tuesday, a quick count found 13 dead adult and joey kangaroos, as well as wombats, in just a 300-metre stretch of road.

When the wire rope barriers were installed in 2018, Golden Beach wildlife rescue team Theresa and Tony ‘Scruff’ Matthews said there was an immediate increase in the number of dead kangaroos along the Dutson Downs stretch.

The problem of excessive roadkill on the roads to Loch Sport and Golden Beach is not a new one, but resident Jenny Dale said new, high fences were exacerbating the problem.

“I drive this road regularly, and so many times I see a kangaroo trapped at the Gippsland Water fence, frantically jumping along it looking for an opening, only to have to go back on the road,” she said.

“Gippsland Water and VicRoads (now Regional Roads Victoria) need to have to look at this issue and make the road safer for all users, not just wildlife.

“For the safety of animals and drivers, there should be better signage to make drivers aware of the need to slow down, and an 80kmh restriction because it is a well known kangaroo crossing.”

Ms Dale’s call for a speed reduction is in line with the current push to reduce 100kmh speed limits on country roads outside major freeways to 80kmh, including council roads such as the Longford-Loch Sport Rd.

Roads Minister Jaala Pulford said in parliament last week that a number of strategies were being considered to reduce the state’s growing road toll.

She did not rule out a default speed reduction in regional areas.

And at a state government road safety summit last month the 80kmh default speed limit was mooted by experts as a way of making country roads safer.

As of June 25, 151 people had died on Victoria’s roads – up from 98 this time last year, with regional Victorians well represented in the Transport Accident Commission data.

While acknowledging something has to be done to improve road safety, Gippsland Water and Regional Roads Victoria have stopped short of supporting an enforced speed reduction.

And in a move sure to raise the ire of locals, Regional Roads Victoria said it was planning to roll out more wire rope barriers on the road.

A Gippsland Water spokesperson said it was working with Regional Roads Victoria to “explore ways” of improving road safety.

“We’ve observed an increase in the kangaroo population throughout the Loch Sport and Dutson Downs areas over the last 12 months,” he said.

He said the “increased kangaroo movement” was most likely reflecting drier conditions as the animals searched for food.

“As one of several major land managers in the area, we are working with Regional Roads Victoria and the local community to explore ways of making the area safer for both motorists and kangaroos,” he said.

“The fencing along the border of our property on Longford Loch Sport Rd has been installed to help us protect and rejuvenate the Dutson Downs landscape, and is not a kangaroo-proof fence.

“The Dutson Downs area is a hive of activity, including both our own activities and those of our neighbours – all of these factors need to be considered.

“Given the increased kangaroo activity in the area, we support Regional Roads Victoria’s appeal to motorists, including our own staff, to slow down and take extra care when passing through the area, particularly around dusk and dawn.”

Regional Roads Victoria director (eastern) Sara Rhodes-Ward said crews would be installing more wildlife warning signage along the route to warn drivers of the risk of kangaroos, and “we’ll continue to monitor the situation”.

“I urge all drivers navigating this road to be especially cautious, reduce their speed and scan the road and roadsides – particularly at dusk and dawn when wildlife is more likely to be on the move,” she said,

A 2015 Gippsland Water kangaroo management document available online states that Gippsland Water “recognises its obligations in the protection and maintenance of native wildlife across Dutson Downs”, but this is “in conjunction with the business needs of Gippsland Water”.

It also states that “land use activities must continue to be financially viable”, and that high densities of kangaroos can result in a reduction in biodiversity, citing a report by Neave and Tanton 1989; Cheal 1986.

The Dutson Downs facility was picketed by wildlife rescuers in 2016, after they claimed too many kangaroos were being shot as part of an “environmental management program”.