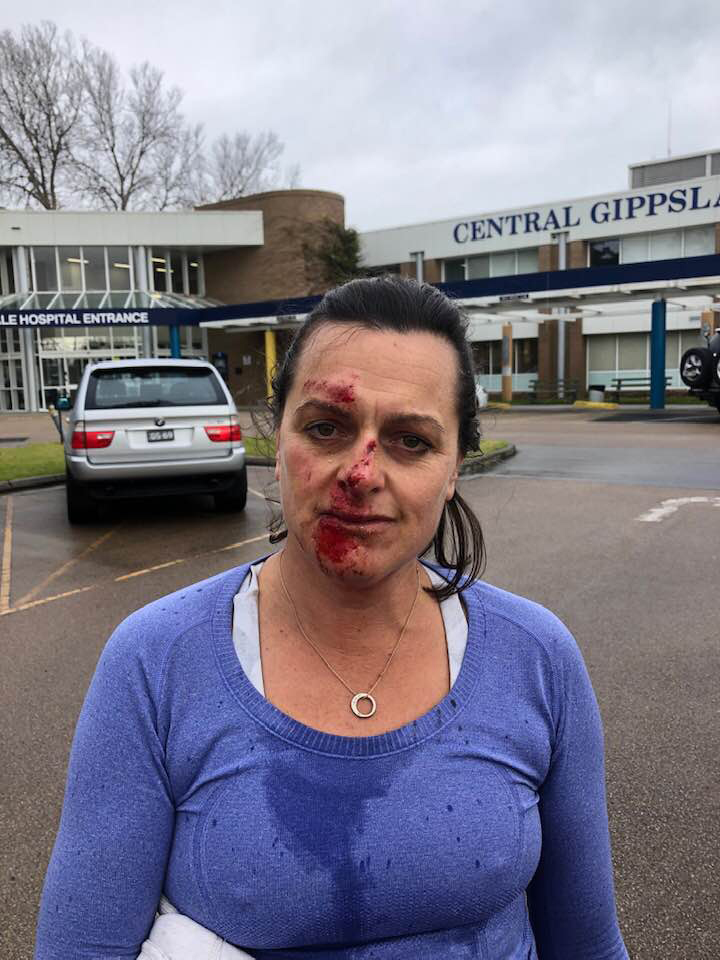 A SALE woman has had a lucky escape after a literal run-in with a kangaroo on Saturday morning.

Jogging her usual route through the Longford pine plantation around Heartbreak Hill, Jo Mactier spotted a large male grey kangaroo, separated from its mob, bounding across her path about 300 metres in front of her path.

Certain the roo had disappeared off into the plantation, Ms Mactier continued on her way with her earphones in, accompanied by her two dogs.

She then caught a glimpse of the same kangaroo mid-air, before he crashed into her left side.

“It completely took me by surprise,” she said.

“I definitely got a visual – I saw his eyes, and his massive chest, and I remember hearing a big crack, and then I blacked out.

“He would have been taller than me, and he had a chest like a rugby player – his whole body was just so strong.

“He just hit me square-on in full flight, and my head’s copped it full barrel into the ground.”

Ms Mactier regained consciousness, unsure how long she had been on the ground for, before finding her way to some dirt bike riders in the area, who helped her back to her car.

After alerting her partner, she was able to drive her own car to Sale Hospital.

“The nurses and the doctor were just great,” she said.

With deep cuts on her face and hand, she received a tetanus shot, x-rays and quickly earned the nickname “Joey” among hospital staff.

Although in good spirits by Sunday, Ms Mactier was still in disbelief at what had happened.

“I just can’t work out why he doubled back — maybe something spooked him,” she said.

“I think he was just agitated and confused – he was definitely stirred up.

Ms Mactier doesn’t believe the kangaroo intended to harm her, but said she would not run alone through the area again A local wildlife carer said it was likely Ms Mactier and her dogs had surprised the animal by inadvertently running too close.