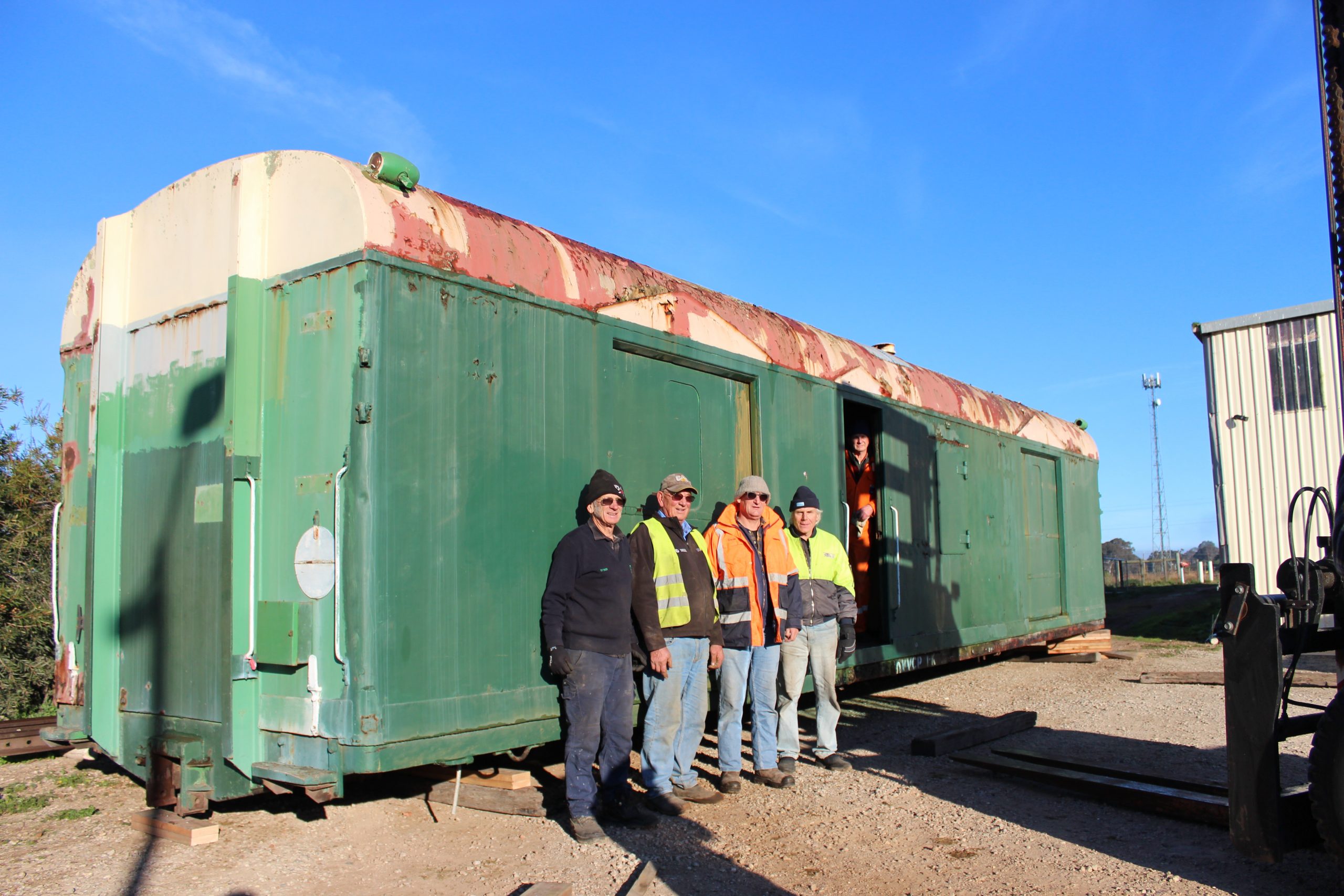 THE first train to visit Maffra since 1993 has pulled into the grounds of the Gippsland Vehicle Collection and Model World Maffra.

But this time, the train arrived on the back of a truck.

The Gippsland Vehicle Collection has bought a disused guard’s van, a train carriage equipped with a brake that could be applied by the guard if required.

The significance of the van, built by AE Goodwin in 1956, comes partly from its serial number one of 40 that were built, and partly from the fact that it was used on the Maffra line when it was in service.

GVC display manager Leigh Sheilds said once the van was refurbished, it would be mounted on train tracks at the disused platform at the side of the museum building.

“It will house a collection of early Gippsland railway history inside, which will add another dimension to the transport experience of visitors to the museum,” he said.

“The carriage requires a large restoration effort, but the nominated crew has already gotten started, and a big effort last Friday got the roof cleaned and most of the non-original interior fittings removed.”

Mr Sheilds said it took some organisation to get the carriage from where it had been resting at Altona North, with a low loader used to transport it.

A suitable route had to be determined, and liaising took place with the owners of two large forklifts and their operators to be on site at the required time for unloading.

GVC vice-president Peter Quennell said the carriage was an additional tourism asset for the collection.

“We have been appealing to vehicle enthusiasts since our opening day with our rotating vehicle exhibit, which changes every four months,” he said.

“The opening of Model World Maffra and the impressive faade and refurbishment at the rear of the building that was required to house it, at the end of last year, provided a new element to our offering and a new attraction for visitors.

“This train carriage brings another element again to our visitor offering, and will be another attraction for new visitors, and another reason for visitors who have already been to come again,” he said.

The guard’s van weighs a formidable 38 tonnes and has a capacity of 10 tonnes.

It was used on the goods trains to Bairnsdale, travelling via the Maffra line until the new station was built at Sale and services were routed via the parallel Traralgon-Sale-Stratford railway.

The platform, where the carriage will take pride of place at the museum site, was built during World War 2 when the building was a vegetable dehydration factory.

The platform was used to load dehydrated vegetables onto trains that then got the products on their way to troops as part of their rations.

It is anticipated that the guard’s carriage will be refurbished and ready on its platform for visitors to explore by late next year.

The Gippsland Vehicle Collection and Model World Maffra is at 1A Sale Rd, Maffra, and is open from 10am to 4pm Friday to Monday. Entry costs $15 per adult and $10 concession, with children aged 15 and under admitted free.