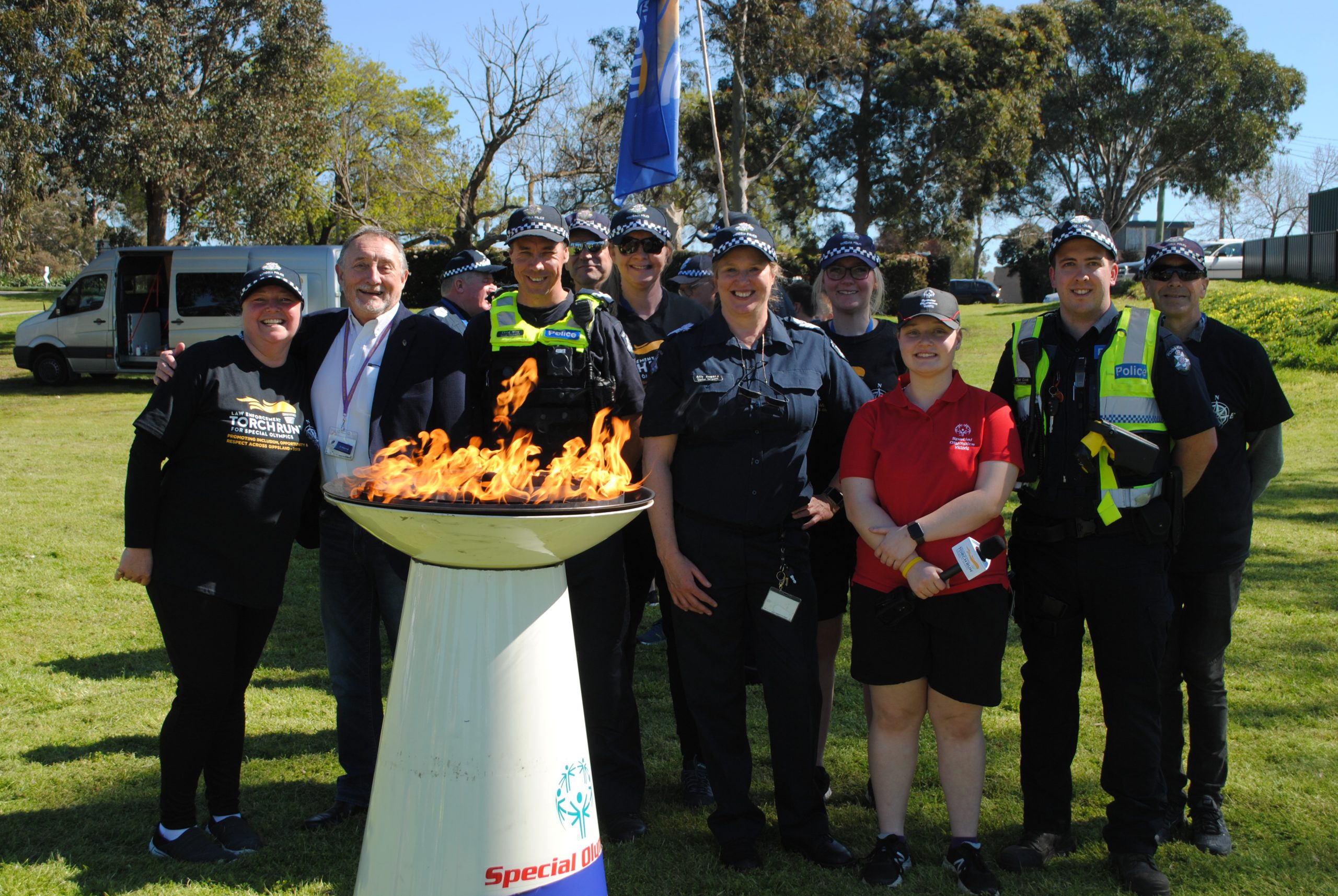 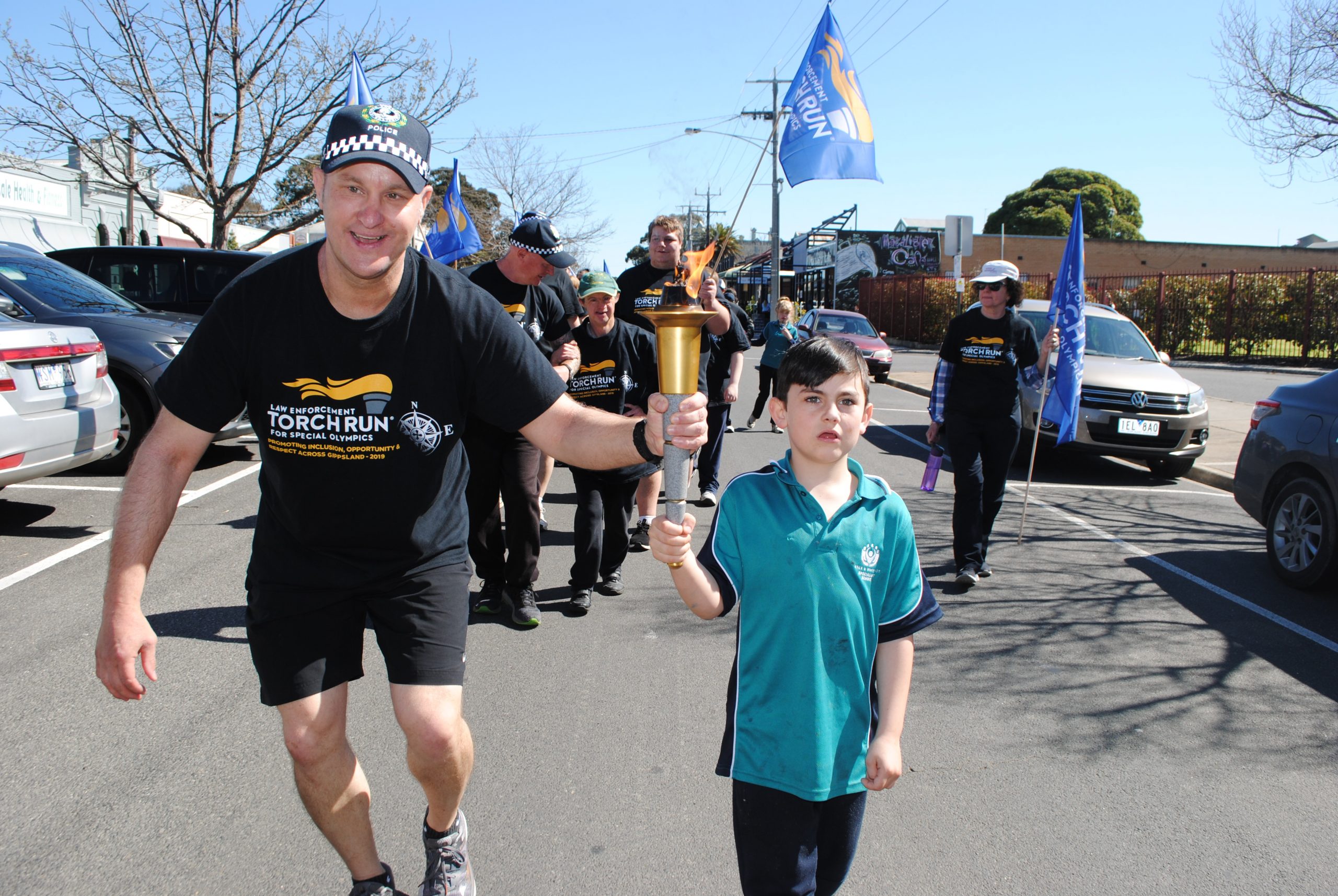 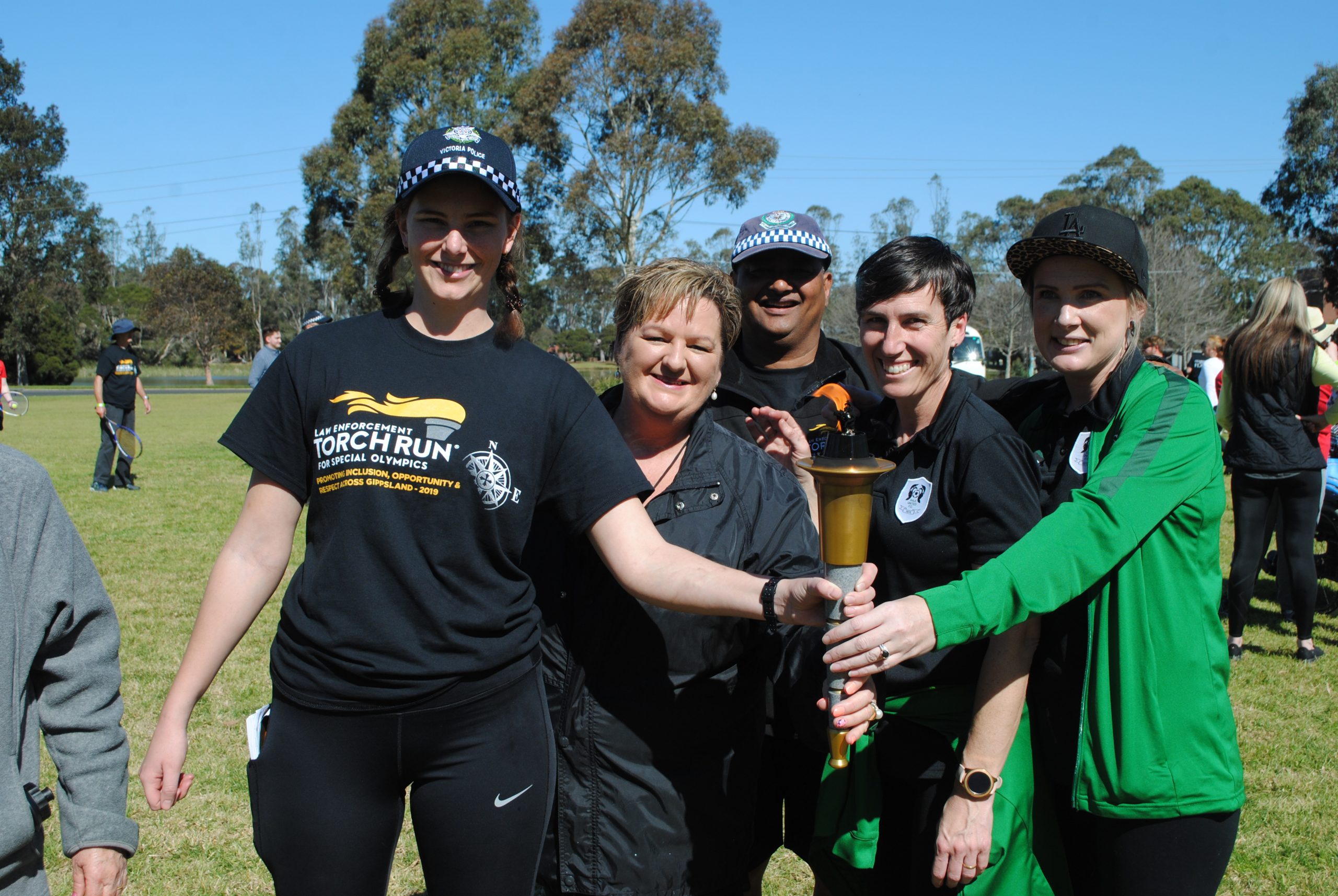 POLICE officers banded together with local residents last Wednesday to carry the ‘flame of hope’ through Sale, as part of the Law Enforcement Torch Run.

The worldwide annual event is run in partnership with the Special Olympics, giving those suffering intellectual disabilities the chance to enjoy some time in the spotlight.

More than 40 police officers from across Australia carried the flame alongside George Gray Centre participants and Sale and District Specialist School students, as the contingent made its way from Raymond St to McMillan Park.

As the parade passed through, business owners, members of the public and students from Sale College came out in their droves to applaud, cheer and wave.

Each member of the run was given an opportunity to be front and centre and carry the torch.

People were then given the chance to participate in a wide range of sporting activities organised by Special Olympics Australia, GippsSport, Sale United Soccer Club and Sale Tennis Club.

Law Enforcement Torch Run vice president and police detective Matt Volk said the run was one of the most enjoyable periods on the policing calendar.

“You can see the colour and the vibrancy, and the smiles on the faces of the local people in the community with an intellectual disability, and how excited they are to take part in this event,” he said.

“We know people with an intellectual disability have been marginalised and know that they haven’t had the opportunities that others have had, so for police to be involved, to give them their chance to shine, be the star of the show, it’s a super important piece of what policing is in Victoria.

“For police, there’s an assumption that it’s all about enforcing the law, and while that’s a primary role for us, it’s equally important that we can connect really well with our local community.

“We just want to promote the importance of inclusion, of participation, of ensuring that there’s good respect and inclusion of people throughout the community, but also that we can form some really long lasting relationships so people have a greater level of trust in what we do.

Detective Volk said the highlight for him was the joy he saw on the faces of people with intellectual disabilities, their carers, their families and friends.

“That is something rare in our organisation in what we do day in day out, so just to see that sheer happiness means a lot to us and we get so much energy out of it,” he said.

The run has been held annually since 1981, with the Victorian leg of this year’s run making its way across Gippsland.

Special Olympics Australia national partnerships manager Simon Rodder said the event was an example of how effective community partnerships could be if they collaborated cohesively.

“You can see that the one thing that brings everyone together is having a bit of fun and being active and that’s what the most important thing is.”

Despite nursing a sore back, Wellington Shire mayor Alan Hall pushed through the pain barrier to complete the trek and paid tribute to all who took part.

“It’s great to see the police engage with our local community as they always seem to do,” he said. “Wellington Shire is great in coming together and embracing all of our community to see that everyone gets a chance to maximise they’re lot in life.”