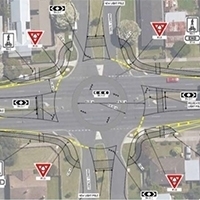 WELLINGTON Shire Council is seeking funding for the installation of a roundabout at the intersection of Macarthur and Market Sts, Sale, as a result of the number of casualties at the location.

This proposal is in line with the Transport Accident Commission 2016-2020 Towards Zero Road Safety Strategy and Action Plan, designed to reduce crashes on the road network.

The project aims to reduce traffic speed through the intersection and separate vulnerable road users from vehicles.

Statistically, the four-way intersection of Macarthur and Market Sts has one of the most extensive crash histories in Gippsland, as well as many anecdotal close shaves.

Between January 1, 2013 and December 31, 2017, there were six recorded crashes at the intersection, including two serious injury crashes and four other injury crashes.

Works have previously been undertaken at this intersection, including the installation of kerb outstands and improvements to pedestrian access.

However, this previous work has been ineffective in preventing crashes and more works are now being considered.

Wellington Shire Council is proposing to install a roundabout to slow traffic on all four legs of the intersection.

It says this would still allow for a free flow of traffic, but at a reduced speed.

Roundabouts are one of the safest intersection treatments used today, and studies show they can reduce the risk of being severely injured by up to 90 per cent.

Roundabouts greatly simplify four-way intersections as drivers must only give way to their right.

In the event of crashes, roundabouts reduce the severity of impact by changing the angles and speed of a collision.