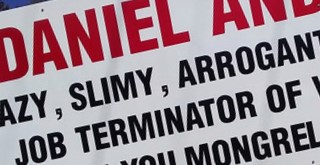 AN offensive sign at Canningvale Timber Mill in Heyfield has been removed, after police paid a visit to the mill’s owner, John Mavros, on Thursday.

The sign, which reads “To: Daniel Andrews sleazy, slimy, arrogant, ignorant, job terminator of Victoria. Die you mongrel c_ _t” has been altered to remove the last direct threat and the obscenity, and is now in storage at the mill.

The sign was erected at the Firebrace Rd mill after Premier Daniel Andrews and Agriculture Minister Jaclyn Symes travelled to a pine plantation in Alberton earlier this month to announce the phase-out of the native timber industry by 2030.

Mr Mavros denied the sign went too far on commercial radio, telling 3AW’s Neil Mitchell his life had been “destroyed twice” by government policy in regards to logging.

This will be the second business Mr Mavros will have lost, after he lost $800,000 in 1989 when the state government introduced Native Vegetation Retention regulations.

“It’s my freedom of expression,” he told Mr Mitchell.

No further police action was taken against Mr Mavros.