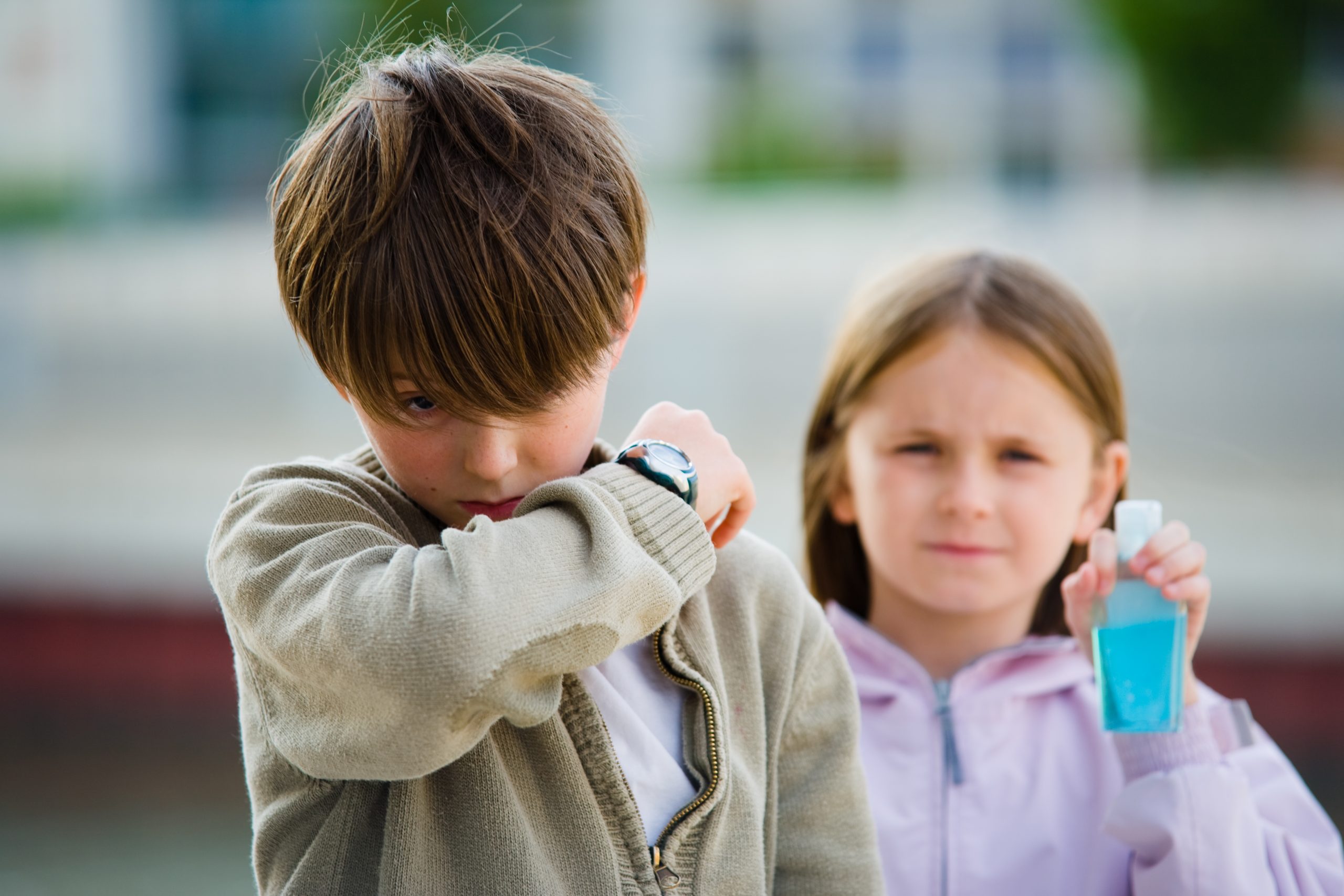 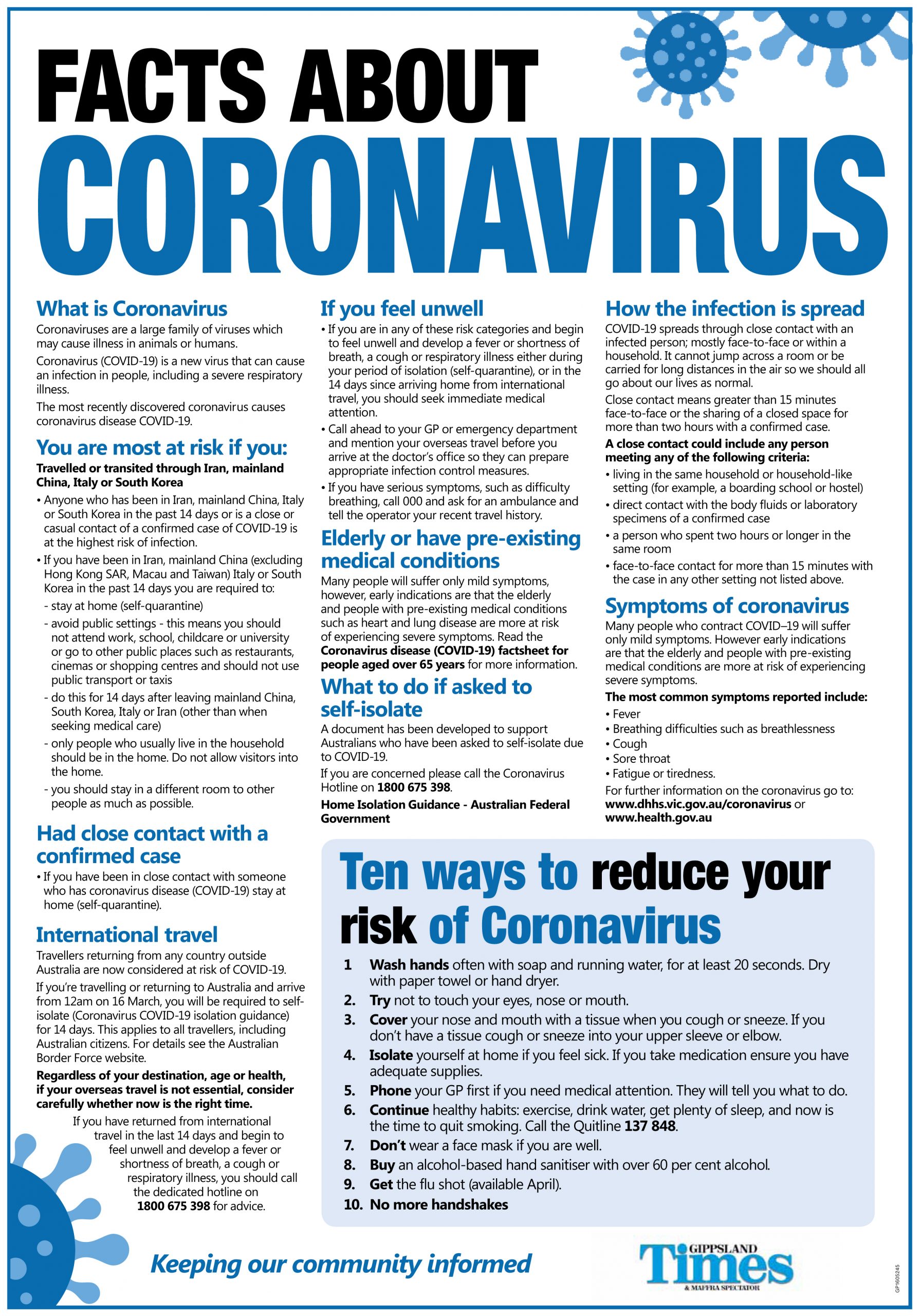 We must work together as a community

A STATE of emergency has been declared in Victoria to help prevent the spread of COVID-19.

The state of emergency began Monday at noon, and will be in force for four weeks to flatten the curve of COVID-19 and give the health system the best chance of managing the virus.

The new measures mean authorised officers can detain people, restrict movement, prevent entry to premises, or provide any other direction considered reasonable to protect public health, under direction from the Chief Health Officer.

The first order under the new powers included banning non-essential gatherings of more than 500 people, such as cultural events, sporting events or conferences.

Schools, TAFEs and universities remain open for now, but have been asked to restrict mass gatherings, such as assemblies and lectures, of more than 500 people.

At this stage, spaces or locations where 500 or more people are in transit, such as Bourke Street Mall, are excluded from the ban on mass gatherings.

If it is deemed necessary to protect public health, the powers can also be used in future to quarantine entire suburbs, businesses or professions – rather than just individuals.

Dr Sutton advised it would be “an unusual circumstance in Victoria to be locking down a really tight geographic area”.

“I think this is a virus that will have rather broad distribution – it might be very focused on metropolitan Melbourne because of the international travel focus here, but it would be very unusual to have a very tightly clustered setting,” he said.

“If that is the case, we could apply particular behavioural measures, or particular movement restrictions if [we] think that’s an appropriate and proportionate response to a cluster.”

“We will work through some of those other really specific details, and some other questions, like aged care,” he said.

Dr Sutton said the evidence for and against school closures would also be discussed, adding there was “genuine uncertainty” about closing schools.

“There’s the risk of pulling people out of the healthcare system, other emergency services and other critical functions because they’re having to care for kids at home,” he said.

“But there is also the uncertainty about what it really does to bring kids into a home setting where they have interactions with adults, versus potentially mostly being engaged with other children, who get very mild disease.

“For children under nine years of age, it is extremely mild disease, and there are virtually no reports of deaths for those below 20 – it’s a tiny percentage.”

He urged people to do the right thing, in terms of distancing themselves from others, hand hygiene and cough etiquette.

“People should absolutely exclude themselves if they are unwell – they need to be at home, not at work, not in public places,” he said.

Dr Sutton said the health system had increased its surveillance mechanisms to detect a potential uptick in cases not related to travel.

“That includes surveillance in our hospital system for admissions and admissions to intensive care, so people with pneumonia are being tested in our acute care services,” he said.

“We also have a GP-based surveillance program where swabs are taken – we do that routinely for the flu season – that will now be a good foundation for testing for COVID-19 as well.”

Dr Sutton recommended people should have about a month’s worth of pharmaceuticals.

“I think it’s important that people who are vulnerable, especially the elderly who are more likely to have prescription medicine, might want to be staying away from pharmacies for a period of time, where let’s face it, people with symptoms and who might be unwell may be attending,” he said.

“I think 60 days is possible, but for the vast majority of people, 30 days would be sufficient.”

Dr Sutton said people in quarantine would not be able to wander down to the shops and buy supplies.

“We are hoping that people can have the right supports from family and friends to give them food, or order online.”

On that note, Premier Daniel Andrews encouraged people to exercise good judgement and common sense when it came to the weekly shop.

“Whilst it is perfectly appropriate, and it’s advisable, for people to, when they go and do their shopping, buy a few extra staples, the basics, it is not appropriate to go and buy three or four week’s or even month’s worth of shopping from A to Z on your normal shopping list,” Mr Andrews said.

“All that means is those who are more vulnerable, those that can’t go to four different supermarkets to get what they need, will miss out.

“We do have care packages – we will get those to you if you run out of those basics.

“We’ve already been doing it, and we do anticipate having to do a lot more of it.”

Mr Andrews said the government would announce more on care packages “in due course”.

“… as challenging as this is, we have acted quickly, we’re ahead of this at the moment,” he said.

“It will change, it will get worse, but this is a really appropriate response.

“This is not an absolute thing, this is not a binary thing where by doing these things we’re announcing today, we can guarantee there’ll be zero cases – we are trying to flatten that curve.”

As of Monday morning, there were 71 cases of COVID-19 in Victoria.

The coronavirus helpline is available on 1800 675 398 for those who can’t arrange food through family and friends or online.

While most Victorians are voluntarily complying with requests to isolate, the expanded powers mean people who don’t comply with a directive could receive a fine of up to $20,000.

Anyone needing advice about whether a mass gathering can proceed can phone the Department of Health and Human Services advice line on 1800 675 398.