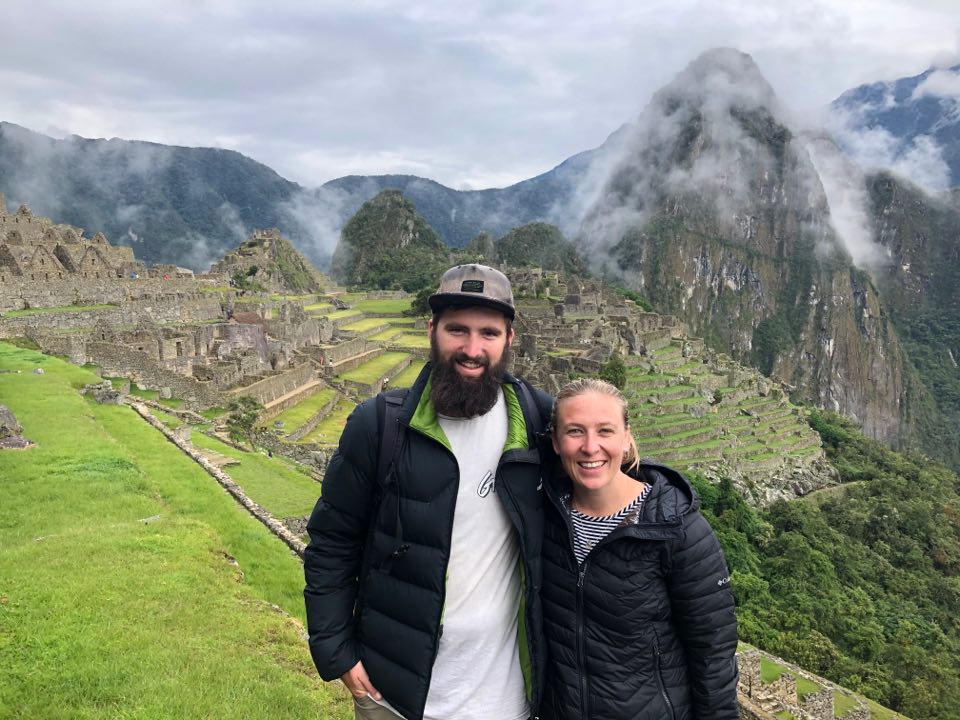 WHILE it’s not the holiday they were expecting, it will certainly be one to tell the grandchildren.

Maffra’s Jackson Callahan and his girlfriend Alex Stobaus are among thousands of Australians across the globe rushing to get home, as travel restrictions begin to tighten internationally to slow the spread of COVID-19.

The young carpenter and nurse had big plans to travel the world this year, jetting off for “gap year number three” in January.

After a few months living the dream on the Galapagos Islands, looking after shelter dogs in the morning and exploring islands in the afternoons, the two were visiting mainland South America – in particular Bolivia and Peru – before planning to continue travels in Europe over the next year. However, the pair is currently awaiting a flight home from La Paz, Bolivia, after their holiday was cut short.

On Tuesday morning, they woke up in Puno, Peru, to news the country was shutting its borders by the end of the day.

“We contacted the embassy in Peru before we left and they told us to get some accommodation, food, and water for 15 days and stay put,” Jackson said.

“We didn’t really want to be in a foreign country that was in lock-down so we decided to leave and get flights home.”

The last bus to cross the border was driving out the gate of the bus station, but the travellers managed to flag it down, and got two of the last three seats on board.

“If we’d missed it, we would of been forced into self quarantine for 15 days,” Jackson said.

“We also wouldn’t have been able to leave Peru for another 15 days after the quarantine … who knows how long after that?”

Jackson said for the 11 days they were in Peru, they didn’t notice much of a response to COVID-19, “except for a few people wearing face masks and hand sanitiser in the hostel restaurant”.

“All restaurants and cafés have been advised to close until further notice,” he said.

“They have reduced the number of international flights as well.

“All foreigners coming to Bolivia have to do a self -quarantine for two weeks as of March 17 – luckily we got here on March 16, so avoided quarantine.

“At this stage, we are still allowed to go out and explore La Paz, so we have gone and seen some of the touristy things around the city, but our options are limited because there aren’t any tours.”

Jackson said the city still felt fairly calm, and there were only 11 confirmed cases of coronavirus as of Wednesday in Bolivia.

“No one seems too worried,” he said.

“All the foreigners are waiting around to catch flights back to their home countries, and the locals don’t seem too worried either.

“We couldn’t get a flight home for four days, and it was extremely expensive to book flights.

“We are crossing our fingers that the borders stay open so we can get home.”

Jackson said while his mother might be feeling otherwise, he wasn’t too concerned while the borders remained open, but wasn’t sure what they would do if they couldn’t get back home.

“Everything is changing so quickly – we will just have to deal with that if it happens,” he said.

“We aren’t really thinking about contracting COVID-19 at the moment.

“In Bolivia, there is only a handful of cases, so it’s definitely worse in Australia.”

Jackson said he felt things could become more difficult if they were to become ill in Bolivia, as communication was proving challenging for the pair.

“Not being able to speak Spanish makes things a little difficult over here,” he said.

“We have no idea from the Bolivian government [about COVID-19 updates].

“We signed up to Smartraveller and we get notifications through them, but even that seems to be delayed by a couple of hours.

“We have been contacting our families, and they have been giving us updates.”

Jackson said they would have a busy two-week self-isolation period ahead of them when they did get back to Australia.

“We got lucky with our insurance because we will be able to claim some stuff.”

He said their other focus would be trying to reorganise their lives.

“We pretty much sold and cancelled everything because we were meant to be gone for the whole year,” he said.

“We will try and find jobs again, then whenever this all settles down, we plan to go back travelling again.”

They plan to spend their last two days in La Paz exploring, but will keep an eye on border closures.

“We hope nothing drastic happens before we leave,” he said.

“We aren’t too worried at the minute, we are a little bit bored waiting around and we are sad about coming home so soon, but there are lots more people worse off than us, so we are quite lucky.

“We are concerned we could catch it and transmit it, but we don’t really have a choice with that.

“We have been using hand sanitiser much more frequently then what we would have done usually.

“Hopefully our immune systems will be okay.”

The Department of Foreign Affairs and Trade has issued advice recommending Australians abroad return home as soon as possible via commercial flights.

It is also advising all Australians to reconsider their need for overseas travel at this time, as international travel becomes more complex and unpredictable.

A 14-day self-isolation period is in place for all those arriving in Australia from overseas.