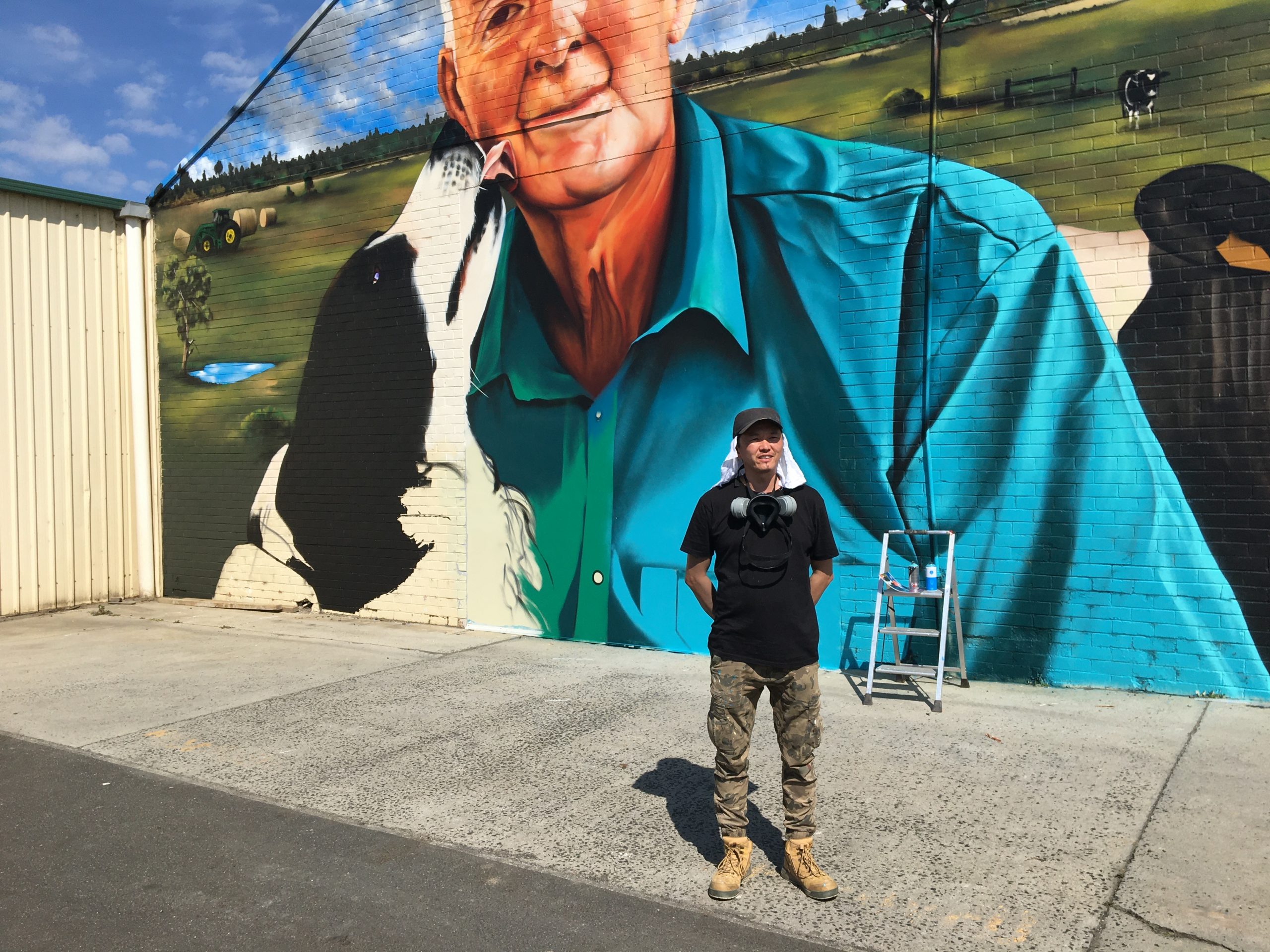 WITH the COVID-19 outbreak casting gloom across the world, a street art project in Yarram is proving a joyous and colourful antidote.

Dubbed ‘Yarram – a Heesco art town’, the project employs the skills of world-renowned street and silo artist Heesco Khosnaran to provide striking artworks on the walls of 10 public buildings.

The brainchild of retired dairy farmer and keen golfer Eric Greenaway, the project’s impetus was the desire to lift Yarram’s economy following years of hardship in the farming community, drought, a steep decline in tourism as a result of bushfires, and now the economic downturn created by the response to the COVID-19 pandemic.

A stunning piece of artwork by Heesco on the wall of Yarram’s Bull Bar and Gallery, a venue created by artist and film maker Wayne Tindall and his wife Anne, gave Mr Greenaway the idea of providing Yarram with the equivalent of the famed silo trail.

“One night at the Bull Bar looking at Heesco’s work I had the initial thought that maybe the town might support the idea of Yarram adopting Heesco as its own, by creating 10 murals on key buildings here we have in Yarram and call the town ‘Heescotown’ Mr Greenaway said.

With Mr Greenaway’s assurance of underwriting the project, Mr Tindall engaged Heesco, and rather than seek government grants, approached 10 local building owners to put up money, time and the walls of their business premises to be painted.

Mr Tindall worked directly with building owners to identify images they would like to feature on their walls, then ‘mocked up’ designs that were ‘signed off’ by building owners.

A great deal of in-kind and financial support has also been given by residents.

The works have been greeted with delight by the community, with Heesco being complimented on his portrayal of local identities whenever he descends from his scissor lift or scaffolding.

The rear wall of Yarram’s Betta Home Living, facing the Bull Bar’s courtyard, has a magnificent mural depicting local wildlife, while Yarram’s Ship Inn has a dramatic sea battle outside at the front and a pirate saloon bar image underway to the side.

Other works in progress include the upper storey wall on the Wynnes Building, the laneway wall of the Yarram Bakery, and an internal wall of the soon-to-be opened Drakeford’s establishment in Commercial Rd.

Until the intervention of the COVID-19 response, a side project involving six Yarram Secondary College students was undertaken, with the students gaining hands-on experience in documentary film making with Anne and Wayne Tindall.

Each painting will feature a site specific QR code that will link back to the dedicated website, with supporting social media links that will give visitors background information about Yarram, the businesses supporting the initiative and the district’s stunning beauty.

Images of the works can be seen on the Facebook page Heesco Town-Yarram, along with comments from locals. Visiting Yarram to view the murals will be something for people far and wide to look forward to after the COVID-19 pandemic is over.