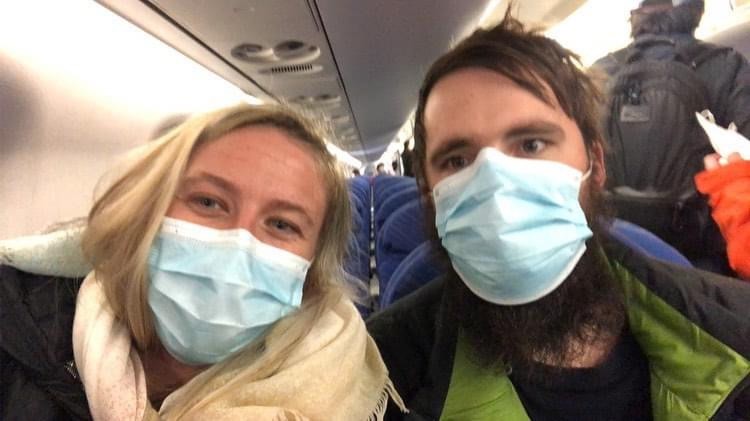 MAFFRA’S Jackson Callahan and his girlfriend Alex Stobaus are finally back down under, after a month stranded in South America.

The pair flew into Melbourne last Wednesday, and are now spending two weeks in mandatory quarantine in a Melbourne hotel.

The Gippsland Times has been following the story of the couple, after plans to travel the world this year were cut short by the COVID-19 pandemic.

The young nurse and carpenter quit their jobs in January and jetted to the Galpagos Islands to work in a dog shelter and explore the area, before a stint on the mainland.

While in Puno, Peru, news the borders were closing because of the pandemic forced the pair to make the snap decision to leave, or be forced into indefinite mandatory quarantine.

They managed to flag down and squeeze onto the last bus crossing the border to La Paz, Bolivia, before buying flights back to Australia.

Unfortunately, they were unable to secure a flight home for four days, and when they finally arrived at the airport, immigration officials told them that Australian borders were shut, and they would not be able to get home.

The pair argued the advice, saying Australians were still able to enter the country.

But with no-one answering the phone at Australia’s end, the pair, and five other Australians, were not allowed to board.

One of the other Australians got in contact with border operations in Australia, which admitted what happened was a mistake.

The group of stranded Aussies said they received no help from the Australian government embassy or consulate.

Jackson and Alex buddied up with a Brisbane couple who were meant to be on the same flight, and rented an apartment for a month while Bolivia went into lockdown.

Restrictions were tight – only one person was allowed to leave the apartment during allocated hours in the day, and only to go to a supermarket or pharmacy.

After a month, it was the Malaysian embassy that got in touch, offering seats on a chartered flight to So Paulo, Brazil.

“We jumped at the chance to get out of Bolivia,” Jackson said.

“We gave up on waiting for the Australian embassy to get us out – they weren’t any real help at all.

“There were only 17 Malaysians in Bolivia, so the Malaysian embassy reached out to other nationalities to fill the flight.

“We had a group chat on WhatsApp for Aussies stuck in Bolivia, a lady from the Malaysian embassy found our group somehow and told us about the chartered flight to So Paulo.”

From Brazil, they caught a flight to Doha, Qatar, then onto Melbourne, with about 70 other Australians.

“We didn’t really speak to any of them, but I think we all felt a sense of relief when the plane took off for Melbourne,” Jackson said.

It took four days to get from Bolivia to Melbourne.

The pair are due to be released from mandatory quarantine on May 7.

“We are disappointed our travel plans for the year didn’t work out, but after being stuck in La Paz for a month, we are relieved to be home,” he said.

“The health system was pretty bad in Bolivia, so if we got sick over there it would’ve been pretty bad.

“But it’s been a very boring month and a half.

“Mum and dad sent us a care package with puzzles and books so we have been doing a lot of that.

Jackson and Alex are allowed out for 10-minute walk on the balcony once a week, meaning they get fresh air for 20 minutes during their entire quarantine period.

Jackson said they were both “definitely looking forward to a bit of freedom”.

“Just going to get groceries when we need them … even just going for a walk is going to be good.”

Jackson will return to see his family in Maffra, and Alex will see hers in Bendigo, before they both return to work.

“Both Alex’s and my family have provided a lot of help and support for us since the start, so we’re excited to see them,” Jackson said.