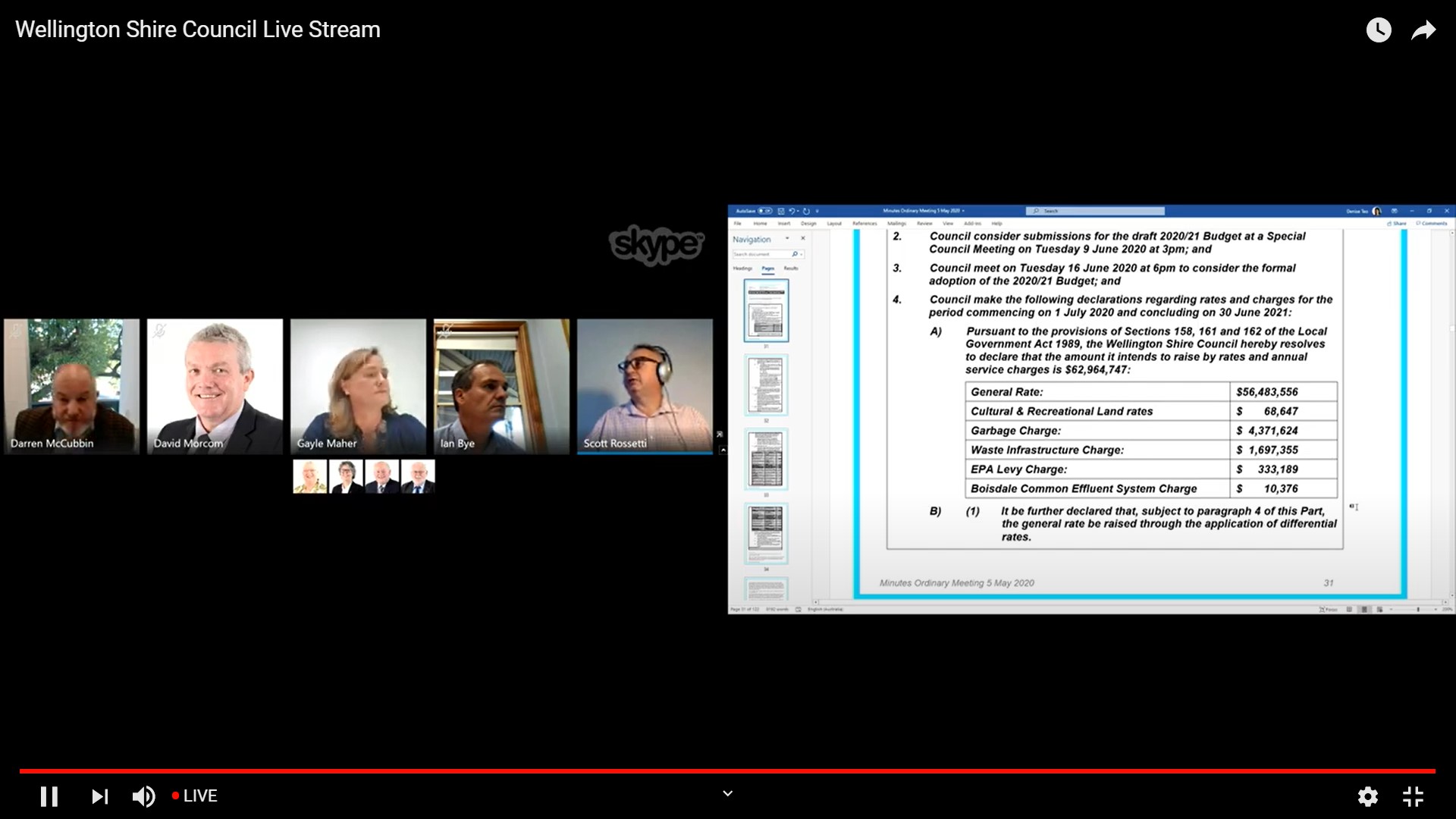 The rate freeze is part of the draft 2020-21 budget, which has been released for public comment.

Council hoped the move would help people struggling financially because of drought, bushfires and COVID-19.

However, with the rate rise freeze contributing to a $1.1 million operating deficit forecast for the next financial year, council will seek cost savings.

It will work to identify where savings can be made in the longer term, including staff and salary levels, with shared services with other councils to also be considered.

With some cuts or reductions to services likely, council will look to maintain and improve key services which are used the most and valued by the community.

Crs Malcolm Hole, Ian Bye and Carmel Ripper voted against the motion, citing concerns over the provision of services.

They instead proposed a two per cent rate increase, in line with the state government’s limit.

Cr Hole said having a zero per cent rate rise was “fraught with danger”, pointing to the early years of Wellington Shire Council from 1994.

“Local government went through no rate rises for three years after amalgamation, and people with good memories will recall the old and antiquated playgrounds, the very poor public conveniences, Lake Guthridge as a cesspit, its sporting facilities in poor condition,” Cr Hole said.

“All because there had been no increase in rates and the escalating cost of the goods and services.

“Eventually the rates had to go up seven and eight per cent to try and make Wellington into the beautiful little shire we have today.

“Today, we have 3300 kilometres of road to maintain, we’ve got six libraries, six pools, one big art gallery, we’ve got sporting facilities that we can be proud of, we also have safety and security lighting all around the shire, we provide 300 jobs approximately, we have all the machinery and gardens to maintain and we provide significant community grants.”

Cr Bye feared the long term effect of not having a fair rate increase.

“By not implementing the two per cent suggested rate increase, we are affecting the shire budget for generations to come, not just now,” he said.

“We can’t recover that $1.1 million overnight.

“Businesses and their costs change, like any others. Our costs go up and our payroll goes up.

“By not increasing our income, we have to reduce a service or future planned initiative.”

Cr Ripper said a two per cent rate rise was needed because “next year we don’t know what’s going to happen”.

“The government has spent so much in a short period of time, we can’t rely on the government to help us out,” she said.

With mayor Alan Hall an apology from the meeting, the other five councillors taking part voted in favour of presenting the draft budget to the public.

Cr Scott Rossetti said council could apply to the Essential Services Commission if it wished to increase rates by more than the prescribed limit to make up the deficit.

“The 20-21 budget has been drafted against the backdrop of a number of challenges that we’ve had recently – droughts, fire and COVID, and I think there’s even talk around about floods at the moment,” he said.

“These challenges continue to affect the community, and therefore the motion that’s put forward now is looking at not applying the two per cent rate cap, but instead freezing the rates at zero per cent and maintaining the base charges at existing levels.

“We also have capital grants set aside for the 20-21 financial year to complete a number of infrastructure projects. If we add these capital grants to our total budget and result, this will reflect a surplus of about $15 million.

“These grants will assist council to undertake a capital works program of approximately $52 million.

“As we emerge and start to recover from the COVID-19, we’ll have more of an idea of how our community’s faring and how businesses have been impacted.

“We’ll certainly have a full six-month review as part of the budget process, to happen early in 2021, so we can better understand the impact of the recent challenges in case we may indeed need to further fine-tune our budget.”

Recovery from the coronavirus pandemic will take a considerable amount of time and sacrifice by the community and all levels of government, Cr Carolyn Crossley said.

“I think that the community would expect us to acknowledge their difficulty and to do the best cost savings that we can to take some of the pressure off their finances.

“This budget not only keeps the rate rise at a freeze, it also keeps the important services that will require going.”

Cr McCubbin said it was the time for council to support the community.

“We have to balance between providing an appropriate level of goods and services with a rate which ensures that people can live through this,” he said.

The delay of state and federal budgets, he said, made it harder for council to factor in government grants.

The garbage charge will remain at $222, waste infrastructure at $55 and Environmental Protection Authority levy charge at $16.92.

Council will consider public submissions during a special meeting on Tuesday, June 9, before adopting the final budget a week later.