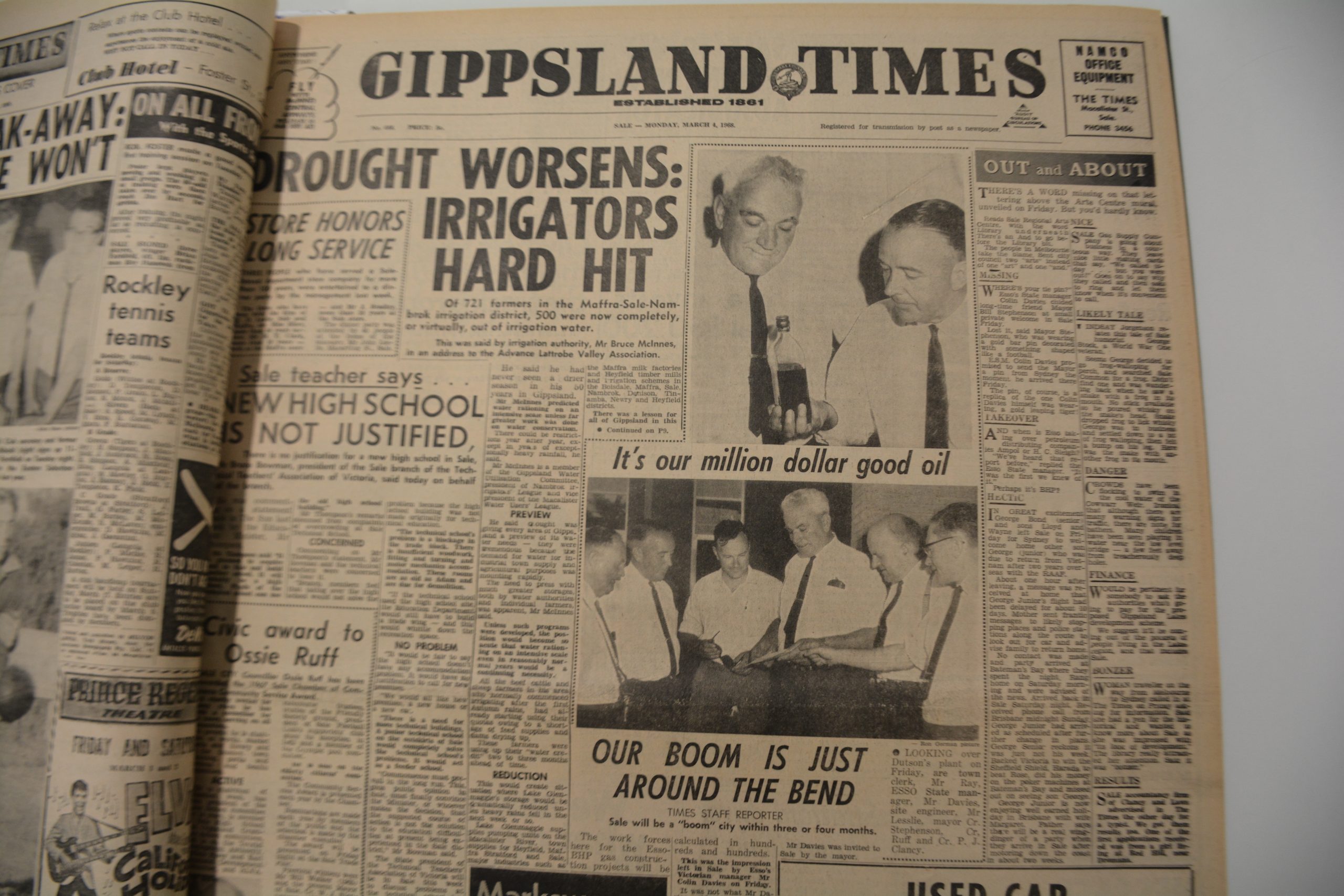 Journalist Geoffrey Williams, who began his career at the Gippsland Times as a cadet in 1960, but now lives in Cudlee Creek, South Australia, has penned these fond memories of times in the local area.

TODAY I went on the internet to see if the Gippsland Times is still being published, and am so pleased to find that it is still rolling off the press as it has for almost 160 years.

My interest is because it was on the Queen’s Birthday Holiday Monday 60 years ago that, at the Gippsland Times, I began my career as a journalist.

The editor was Bob Thompter, then followed by John S Bollard, and they taught me well in launching my career that took me around the world in 45 unbroken years of journalism.

Now, at the age of 80, I remember the Times and the Maffra Spectator with great fondness – reporting on the councils, police rounds, courts, community groups and all the general news – particularly chasing the secretive details in the Woodside search for oil, which led to the Bass Strait oilfields.

I was one of three young journalists – then known as reporters – who were keen to learn.

I got good grounding in reporting the Maffra, Avon and Rosedale shire councils and sat in with Mr Bollard as we covered the City of Sale under the mayoralty of Big Bill Stephenson and ‘Shackie’ Ray the town clerk.

Sport was important and was my brief.

In those days, Sale was in the Latrobe Valley Football League and I was the Sale boundary umpire for the seconds game and reported on the seniors – Bob Mason, Kevin and Tommy Hart,

For the Latrobe Valley Football League’s Maffra, Heyfield and Stratford matches, I rang the club secretaries on the Sunday morning and interviewed them about the game, and wrote the Times reports from what they told me.

The Spectator ran the same reports as the Times, but I always re-angled the Maffra games so it was a Maffra-bias report, win or lose.

In the Sale-Maffra Cricket Association, I played for Cobains and wrote the cricket the same as footy – ring the home club secretary on Sunday for the score sheet, have a chat and write the report from the talk and the scores and my knowledge as a player about how the season was going.

Neville Marchesi at Heyfield and the Wrigglesworths at Bundalaguah were the stars back then.

As in swimming were Russell Salmon and Corrie Fuest.

There are lots of names with good memories for me 60 years later.

I lived happily with Bob and Barbara Elliman and their two young children.

Herb Guyatt taught me a lot about the local wildlife.

Eric Bock at Avon Shire regularly gave me news tips. Kevin Stanley at the bank was another.

Henry Ciddor at Sharpe’s told me LVFL info that the league wanted to keep quiet.

Gary Ord at 3TR was a mate who later became an ABC Radio star, and we would talk in Jim Griston’s Metro Coffee Shop in York St.

I laughed when Charlie Eubergang once sent me a note and signed it “eventually yours”.

Mrs McFarlane and daughter Bev had a little shop down around the corner from where I boarded.

I still fondly remember Lynette Baker who worked in Coles – a lovely, funny girl who was a beautiful ballroom dancer and great company.

Also, the girl I partnered at her deb ball in the memorial hall, whose picture of us I still have but whose name I now cannot recall.

But, when life gets back to some normality I will go back to see the 21st century Sale and revisit the happy memories of my past.

With luck, the old bound volumes of the Gippsland Times will be available so I can revisit what I wrote at the genesis of a career which so enlightened and rewarded me.