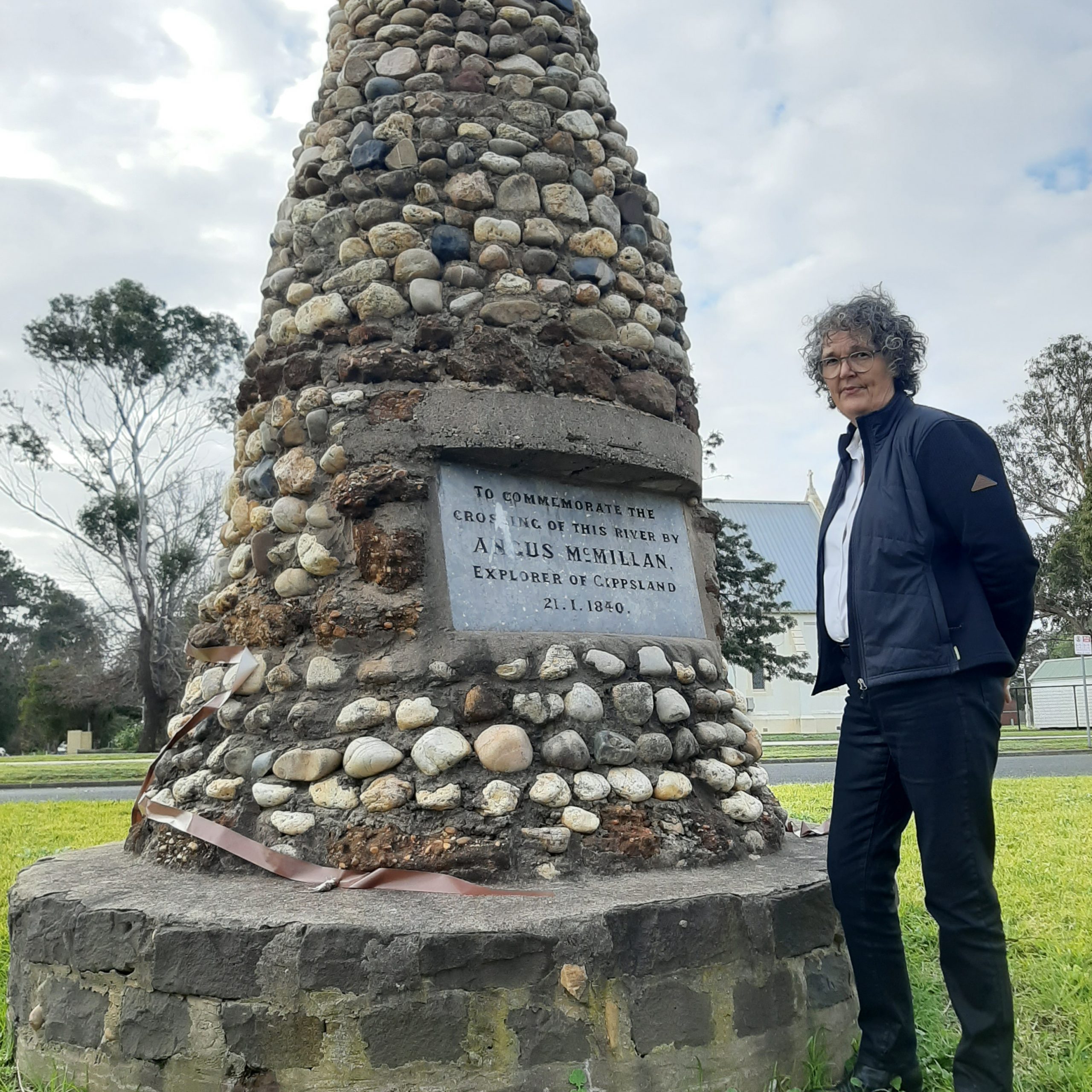 A WELLINGTON Shire councillor says her colleagues’ rejection of a proposal to tear down monuments honouring Angus McMillan is a missed opportunity to acknowledge indigenous injustices in the momentum of the ‘Black Lives Matter’ debate.

Cr Crossley wants the removal of the monuments to address the “long-standing issue of the inappropriateness” of the McMillan cairns and as a first step to forming “a deeper partnership with, and understanding of, the Gunaikurnai people”.

Her four-part motion also called on the council to seek approval for the removal of seven other McMillain cairns within the shire on land not managed by the council; engagement with indigenous people to devise an “appropriate” way of recognising the area’s shared history; and a review of the appropriateness of council’s public reserves named for McMillan.

Cr Crossley said she was floored by her fellow councillors’ votes, after discussions leading up to the council meeting had caused her to believe she would have strong support for the motion.

In the end, only councillors Alan Hall, Gayle Maher and Darren McCubbin supported her motion, while councillors Malcolm Hole, Ian Bye, Carmen Ripper, Garry Stephens and Scott Rossetti voted against, with Cr Hole questioning the accuracy of the history and others saying they did not have enough information to make a decision.

Cr Crossley said they were all “excuses” that could not be justified, and she was disappointed that some of her fellow councillors were “deaf” to the community’s indigenous voices and the submissions that backed the monuments’ removal.

“They have missed the moment, this debate is in the community now and we could have made a stand,” she said.

“This council could have led the way and done something that counts.”

A total 55 per cent of the 240 submissions to the council wanted the McMillan monuments completely removed, while another 33 per cent called for them to be altered to reflect McMillan’s involvement in the murder and persecution of indigenous people 170 years ago.

Angus McMillan has long been lauded as an early discoverer of Gippsland, who explored what is now east Gippsland on behalf of Captain Lachlan Macalister.

However, by the 1970s some historians had named McMillan as a key figure in several massacres of indigenous communities.

Cr Crossley said the early explorer monuments were the project of a small group of “misguided” and self-interested business people who did not understand the significance of the explorer’s actions.

Despite the failure of her motion to remove them, Cr Crossley said she would continue the push for better engagement with indigenous communities and to support council projects that worked towards the reconciliation goal.

Gunaikurnai Land and Waters Aboriginal Corporation chairman Troy McDonald said he was grateful to Cr Cossley for putting the motion up, but disappointed that the full council “couldn’t find a way to move forward on this issue”.

“We are proud of our representation to council and of the Gunaikurnai men and women who spoke in support of the motion and in the media,” he said.

“We will continue to strive for progress in matters such as these to help healing in our community.

“We will be interested in how the shire represents the real history of Gippsland into the future.”

Mr McDonald said GLaWAC was happy to know that 78 per cent of the community submissions received by council were in support of removing or updating the cairns.

Only 17 per cent of submissions were in favour of retaining the cairns, while five per cent sought more information.

“Our previous statements on this issue stand – we support a process that will bring healing and greater unification to our region,” Mr McDonald said.

“GLaWAC will continue to work for more appropriate recognition of Gippsland history including the non-Aboriginal history to be told.

“This was one decision by the shire, but these are very real matters, everyday matters for Gunaikurnai people.”

Mr McDonald said if Aboriginal people were feeling upset about the decision, GLaWAC would encourage them to talk with friends and community and to contact their local Aboriginal community organisation for support.

GIPPSLAND South MLA Danny O’Brien has weighed into the debate about whether cairns honouring explorer Angus McMillan should be removed, saying he was “not a fan of tearing down monuments or trying to erase parts of history we might not like”.

“We have seen a worrying escalation of cancel culture in the past few weeks, including attacks on products and companies with names with the most tenuous connection to a racist word or historic event, and an absurd suggestion to change the name of our great state of Victoria,” Mr O’Brien said.

“I humbly suggest to anyone seeking a more reconciled nation that these actions will do nothing to unite us.

“This cuts both ways.

“When it comes to cairns marking the journeys of Angus McMillan in Gippsland, I absolutely think we need change.

“McMillan was the first member for South Gippsland (as the electorate was originally named), and as his political descendant I think there is an opportunity to promote better understanding of history and genuine reconciliation.

“McMillan has been feted as an early European explorer and settler, but less publicised is his role in massacres of the Gunnaikurnai.

“We should not be celebrating such a man, but I believe in consultation with today’s Gunnaikurnai we can rework the cairns to tell the full story of history.”

Mr O’Brien said he was glad Wellington Shire Council voted not to remove the cairns altogether.

“While the intent behind the motion was laudable, the community deserve greater notice and more say,” he said.

“We must do better to tell our full history, including our Indigenous past, and educate about culture.

“At school I never learned anything about Indigenous culture, like the Gunaikurnai creation story of Borun and Tuk.

“Today this story is told in public works such as at the Port of Sale, but there is much, much more to do to celebrate, to learn and to unite.”