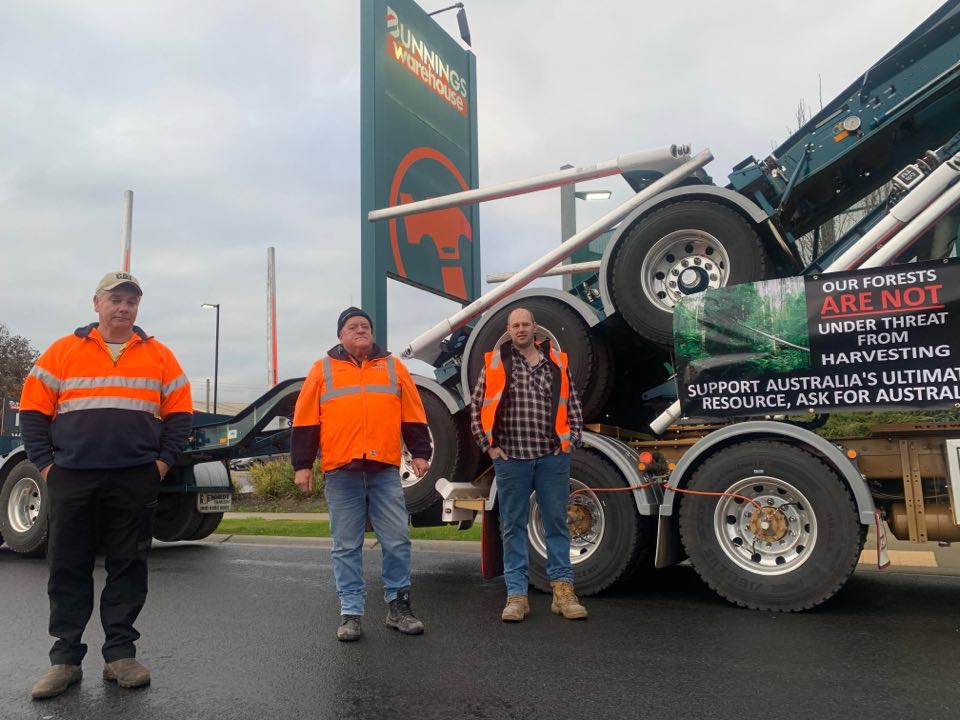 LOGGING trucks blocked the entrance to Traralgon Bunnings from 6.30am onwards on Wednesday, as timber workers protested the company’s decision to axe VicForests timber from its stores.

The decision is Bunnings’ response to a Federal Court ruling that the state government-owned forestry agency breached conservation laws in relation to the production of greater glider and Leadbeater’s possum habitat.

That decision is being appealed.

Backing up the blockade, hundreds of sawmill workers, contractors, and their crews were expected to phone Bunnings’ head office in Hawthorn East calling for the reversal of the decision.

A statement released by the CFMMEU said thousands of Australians had committed to boycotting Bunnings until they reverse their local timber ban, and while COVID-19 had so far prevented larger rallies, demonstrations, and actions at Bunnings’ busier warehouses such as those in metropolitan Melbourne, once it is safe to do so and COVID-19 restrictions ease, the store could expect similar action nationally.

Backing up the blockade, hundreds of sawmill workers, contractors, and their crews were expected to phone Bunnings’ head office in Hawthorn East calling for the reversal of the decision.

A statement released by the Construction, Forestry, Maritime, Mining and Energy Union said thousands of Australians had committed to boycotting Bunnings until it reversed its local timber ban, and while COVID-19 had so far prevented larger rallies, demonstrations, and actions at Bunnings’ busier warehouses such as those in metropolitan Melbourne, once it was safe to do so and COVID-19 restrictions eased, the store could expect similar action nationally.

“Actions like this can impact on a store’s revenue and should not be taken lightly by Bunnings’ management,” the statement said.

CFMMEU national secretary Michael O’Connor warned the action was “a sign of things to come at Bunnings Warehouses across Australia if they do not agree to reverse their ban on local timber”.

“Timber workers will not sit back and be pushed around …,” Mr O’Connor said.

“Regional Victoria is facing a jobs crisis, Bunnings’ short-sited decision has added to the continued uncertainty in the industry and contractors are bearing the brunt of this,” Ms Gardner said.

Australian Forest Products Association chief executive Ross Hampton said the store claimed it made this decision because it did not stock illegal timber, but it was completely wrong to equate tightly-regulated, sustainably-managed Victorian timber harvesting operations with the globally recognised definition of ‘illegal logging’ – unsanctioned, unregulated deforestation.

“According to Interpol, between 15 and 30 per cent of the timber trade in the world is ‘illegal’.

“That means more than $70 billion dollars worth of globally traded timber comes from illegal sources,” he said.

“None of that timber comes from the state government agencies, which run accredited, audited and sustainable native forestry operations in this country.

“On top of that, Bunnings has moved prematurely in not even waiting for the foreshadowed appeal of the Federal Court case on which it has based its decision.

“There are just four trees out of 10,000 used in native forestry in Victoria, and it is 100 per cent regrowth forestry.

“It is certified to the world’s largest global certification scheme called PEFC (trading as Responsible Wood).

“Every tree that is used is regenerated.

“It is completely sustainable environmentally, and a vital driver of jobs in many regional Victorian towns.”

But Wilderness Society national campaigns director Amelia Young said uncertainty in the Victorian timber industry had been years in the making.

“(It) arises from bad forest management, from over-logging, and the bulk of wood sourced from native forests being sent to pulp for paper, and not to sawmills for timber products,” she said.

“There are hundreds of regional jobs involved in the Victorian native timber sector, and these are important.

“That’s why the state government must support the industry to transition out of native forests and into plantations.

“The future of the Victorian wood and fibre industry is in plantations, and Gippsland sawmills must be supported to invest in the skills and machinery required to process plantation timber.

“Bunnings’ recent decision to discontinue sourcing from notoriously unreliable state government loggers VicForests should not come as a surprise to anyone, and strongly signals the future direction of the industry – that is, lawfully harvested timber, and plantation supply.

“There is no ban on local timber – Bunnings is just not buying unlawfully logged timber.

“Surely the CFMMEU isn’t demanding that Bunnings place illegal timber on its shelves?”