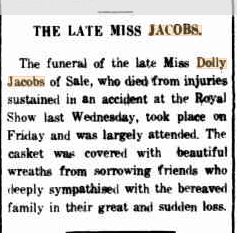 ON September 26, the tragic death of young Sale horsewoman Christina Rose ‘Dolly’ Jacobs at the Royal Melbourne Showgrounds in a trotting event in 1928 will be remembered once again.

Dolly was one of only nine females that were licensed to compete against the men in the metropolitan area in the 1920s and although her best performance in town was a second, she won a trot in 1924 at an Orbost mixed code meeting and another at the Sale Athletics Sports meeting in 1926.

Competing in the first heat of the Prestige Ladies Trot, Dolly was riding Hue Wind and at the end of the back straight in front of the Chirnside stand in the final lap of a three lap race, Dolly crashed to the ground.

Her mount Hue Wind was passing the pacemaker Delma Huon (ridden by the legendary Pearl Kelly) and looked certain to win until the horse tangled in its hopples, slipped and fell.

Dolly was catapulted ahead of the horse, landing on her head.

Despite wearing a skull cap, she was rendered unconscious.

Medical staff rushed to the young 26 year-old and she was quickly placed in an ambulance to be transported to hospital, however, she sadly died on the way.

Earlier this year, the National Harness Racing Trainers and Drivers Memorial was unveiled at Tabcorp Park, Menangle, New South Wales, and to date a photograph of Dolly has not been found to form part of the memorial.

Dolly lived with her parents William and Caroline in Stratford Rd, Sale.

Anyone who has or knows where a photograph of Dolly can be found should write to John Peck by mail (82 Shady Grove, Forest Hill, 3131), phone (03) 9884 8604 or email johnpeck@optusnet.com.au so he can arrange for the photograph to be incorporated in the memorial.