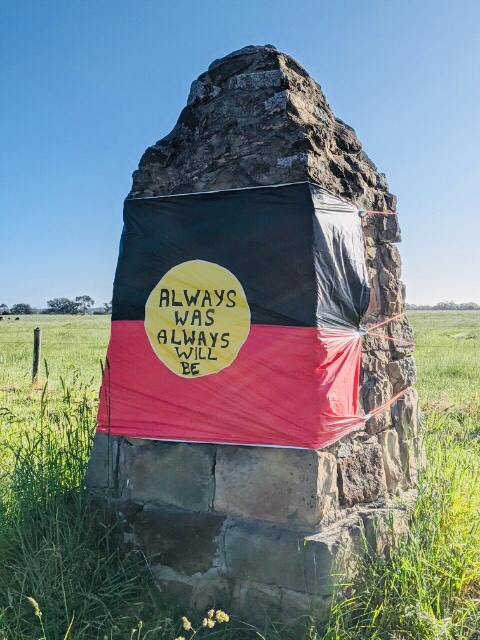 LOCAL McMillan cairns have been draped in Indigenous flags for NAIDOC Week.

The flags’ organisers say the memorials’ temporary new look was given to the controversial local memorials in acknowledgement of NAIDOC Week 2020’s theme of ‘Always Was, Always Will Be’.

The theme recognises Australia’s story didn’t begin with documented European contact, acknowledging that First Nations people have occupied and cared for the continent for more than 65,000 years.

Organisers said Aboriginal and Torres Strait Islander people were Australia’s first explorers, navigators, engineers, farmers, botanists, scientists, diplomats, astronomers and artists, long before 1770 or 1606 with the arrival of the Dutch on the Western Australia coast, or European exploration and colonisation.

“The first footprints to walk on this country were those belonging to Gunaikurnai,” they said.

The cairns became a focus of controversy earlier this year when a motion was put to a Wellington Shire Council meeting to remove the memorials, erected in the 1920s to honour Gippsland pastoralist Angus McMillan.

McMillan explored what is now east Gippsland on behalf of Captain Lachlan Macalister, naming the Nicholson, Mitchell, Avon and Macalister rivers, but was named by historians as an attacker or organiser of at least seven Gunaikurnai massacres, which resulted in hundreds of Aboriginal deaths.

In the wake of Black Lives Matter protests around the world, councillor Carolyn Crossley attempted to have the statues either removed entirely or amended to reflect the Gunaikurnai history, “in the spirit of reconciliation”.

News of the motion sparked debate on social media before and after the meeting, and prompted 239 letters, emails and comment forms to council – 55 per cent supporting removing the markers, 23 per cent supported retaining them but with some acknowledgement of history and 17 per cent were against anything being done, while five per cent sought more information.

Passionate discussion of the motion during the meeting took almost an hour and 50 minutes, but the motion was eventually defeated four to five.

Beginning on Sunday, NAIDOC Week is being celebrated Australia-wide with a host of activities, including Boisdale Indigenous artist Cassie Leatham’s Healing online exhibition, available via www.melton.vic.gov.au.

Ms Leatham is also hosting a free talk and question and answer online session for teens via the National Gallery of Victoria website on Tuesday from 5pm.