CHRIS McEvoy could not be happier. His new Radial Timber sawmill at Yarram is working extremely well, but there is a cloud on the horizon: the Andrews government’s plan to close the native forest industry by 2030 will leave him five years’ short of timber supply.

The plan was to make the business self-sufficient in the long term, but in the interim, it still relies on timber supply from VicForests.

“The real dilemma is, we’ve got the longest contract with VicForests of all timber producers – until the end of 2026 — due to the huge investment in the new mill in 2016,” he said.

VicForests is scheduled to start cutting back on supply from 2024.

“We can see the end in sight even with 2030, but we are potentially still five years short.”

The new mill, which uses the radial cutting technology originally conceived by Andy Knorr, has now been operating for four-and-a-half years.

Radial sawing cuts a log like a cake, which creates less waste and processes smaller logs than conventional sawing.

“We have hit our strides,” said Mr McEvoy, the company owner and managing director, who is a wood scientist and former CSIRO employee.

“We are in full production; we are easily cutting our annual allocation.

“We have a stable crew and stable production facility,” he said.

The high performance led to a recent visit to the business by Victoria’s Governor, Linda Dessau.

The mill is processing 12,000 cubic metres a year, while the old mill site is now a new drying mill.

“We have four times the production of the old mill, with the same number of staff – 20 people – who are multi-skilled and all doing it easily,” he said.

The company’s trees are being grown by Heartwood Plantations, which has a joint venture with Radial. They now have 3000 hectares of trees on 4000ha of land within a 50-kilometre radius of Yarram.

A key acquisition was 1500ha over 24 properties bought from the failed management investment company Great Southern Plantations in 2017.

Most had been planted to Blue gum and some Shining gum for woodchips.

“As these plantations are harvested, we are replanting to high-value sawlog species,” Mr McEvoy said.

“These are at various stages of growth.

“The oldest is 16 years old, and we are planting every year.

With experience, Radial has now changed its plantation model, but with the emphasis still on durable hardwoods.

The species mix has grown from four to about six or seven — Yellow stringybark, Silver top, Spotted gum, Coastal grey box (class one, “grows locally, slow growing, the form is not great, but can be improved by genetics – definitely a new one”), Red iron bark, (“another class one from Gippsland”) and Southern mahogany.

“We also do a lot more random establishment – still planting in rows, but mixing up the species,” Mr McEvoy said.

“What we found – Darwin’s natural section showed us how forests work. The stronger survive and the weakest don’t.

Mr McEvoy said a frost or nutrient deficiency could destroy a whole block and “you are back to square one”.

However, by mixing up and using the right species, a frost may only take out a few trees, which were then thinned as part of the usual thinning process.

“You don’t have to start from scratch,” he said.

“Also, it’s really good for biodiversity; there is no sterile monoculture forest. It’s similar to a mixed species forest.”

Mr McEvoy said many people maintained these timbers would not grow well in plantation – “they won’t grow straight enough, or fast enough”.

“But when you talk high value timbers, you have time on your side.

“There are a lot of even non-traditional products you can do,” he said.

“They’ve gone away from plastic and steel and treated pine; they want odd forms, bent and twisty wood.

“Not everything has to be sawn timber for flooring – that’s how markets evolve.”

Fencing and managing the plantations still remained an ongoing cost, but livestock are now used as a natural way to control weeds and fire risk.

“To plant and maintain – the cost goes up every year,” Mr McEvoy said.

“It does get harder to manage privately — the ongoing, 30-year cycle with very little income and inflated expenses.

“It’s not a fantastic business model.

“For now, we still need VicForests’ timber for cash flow, but the very efficient, reduced-cost mill is helping to fund ongoing plantation establishment,” he said.

Mr McEvoy said 30 years was the optimum time for harvesting, with trees thinned from 1000 per hectare down to 500 and then 250.

“We already get some saleable products after eight to 10 years – ‘thinnings’, which are peeled,” he said.

“We take the sapwood off – it’s not durable – and use the thinned products as organic posts for vineyards or farms that want hard-wearing hardwood posts, not treated pine,” – and firewood, which is in high demand at the moment.

Radial has had to sell a couple of blocks to ensure cash flow.

“There is no point in being land rich and cash poor,” Mr McEvoy said.

“We are still looking for investors – we would like to have more people to invest and plant trees,” he said.

Mr McEvoy maintains that timber needs to break out of the perception that it is a low-value product and aim for higher value, especially based on its sustainability credentials.

“We should position timber where it needs to be,” he said.

“Steel and concrete have doubled or tripled in price in recent times.

“Poor timber has been left behind – it’s just a tree, a cheap commodity product.

“More and more, it needs to be seen as a premium product.

“I think then, it will encourage investors,” he said.

“Recent timber scarcity and price increases around the world suggest this is starting to happen.” 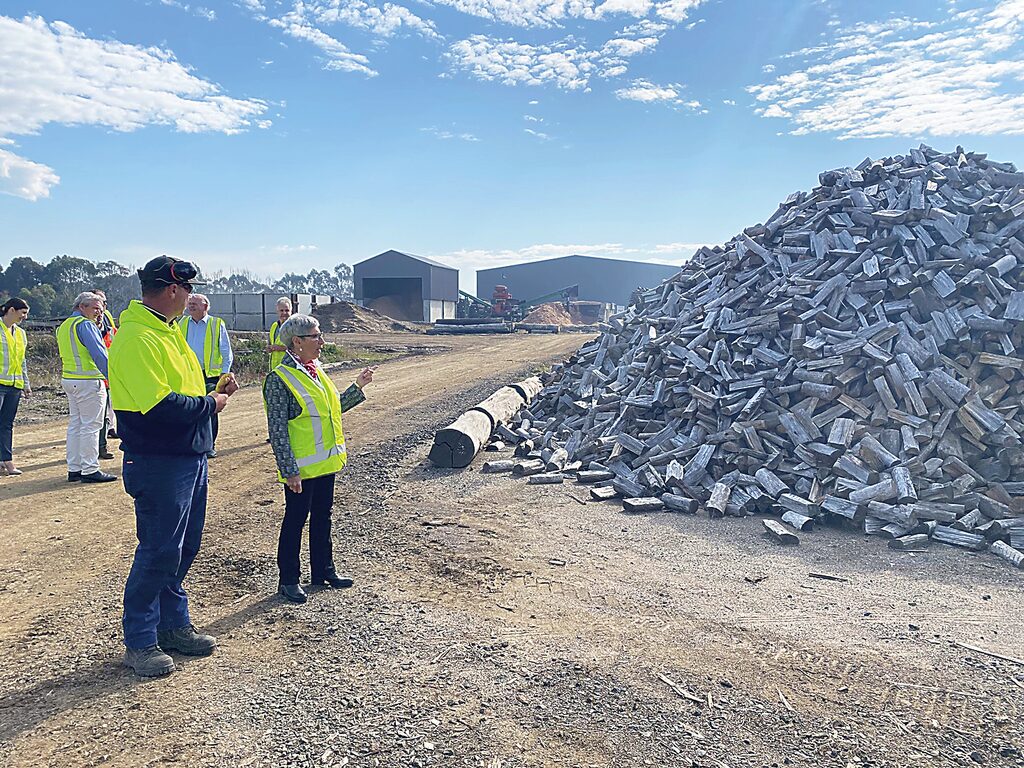