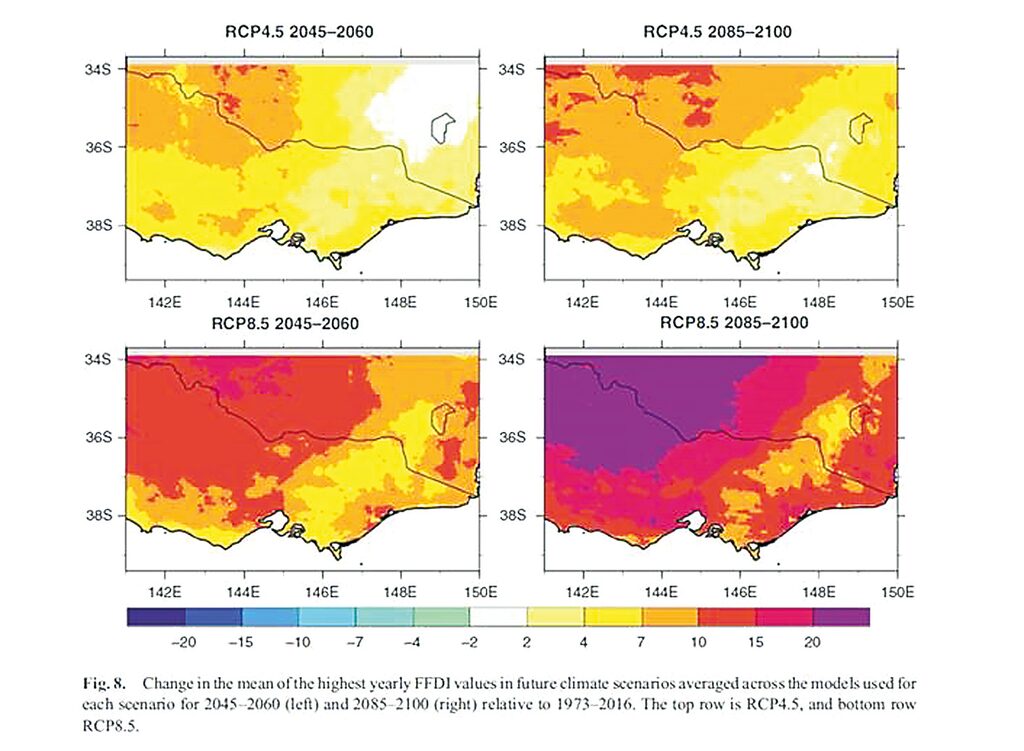 THE number of high-risk bushfire days could triple in some parts of Victoria by the end of the century, according to new climate research by the Country Fire Authority and international research bodies.
The research, published this month in the International Journal of Wildland Fire, found that under different emissions scenarios both mean and extreme fire danger are expected to increase in Victoria.
Statewide, research modelling indicates a 10 to 20 per cent increase in extreme Forest Fire Danger Index, with the greatest change projected in the north-west region.
However, the greatest relative change in the number of ‘very high’ days per year will be in central and eastern parts of the state where there is a projected doubling and tripling, respectively in the number of ‘very high’ days.
From 1973 to 2016, the number of historical very high risk bushfire days in Bairnsdale — representing south-east Victoria — is 3.5.
By the projected period of 2085 to 2100, based on multi-model mean of high emission scenario, it is expected to reach eight days.
Report co-author, CFA’s manager of research and development, Dr Sarah Harris, said scenarios used in the research show increased temperature, caused by human-induced climate change, to be the main driver of heightened fire danger.
“Changes in temperature, humidity and rainfall during spring and early summer mean the fire season will continue to start earlier and run longer,” she said.
“As a flow-on effect, springtime opportunities for prescribed burning could reduce,” she said.
Forest Fire Management Victoria chief fire officer Chris Hardman said partnerships with community and agencies such as CFA and FRV helped ensure the state was unified in emergency preparedness and response.
“We know that Victoria is one of the most bushfire-prone areas in the world,” he said.
“Climate change is increasing the risk bushfires pose to our communities, our critical infrastructure and our environment.
“That’s why our strategic approach to managing bushfire risk is based on the best evidence available, such as this research.
“We have a 365-day approach to fuel management, more mechanical treatment and increasing capacity to contain bushfires at first attack.
“We are also prioritising empowering Traditional Owners to lead self-determined cultural fire practices on country.”
CFA Chief Officer Jason Heffernan said he was proud of CFA’s robust research program, which he said brought further understanding of the impacts of climate change in the context of firefighting.
“As firefighters, we see the effects of these longer and more severe fire seasons and it’s important that we turn our minds towards what firefighting looks like in the not-too-distant future,” he said.
“CFA is undertaking work to identify challenges brought on by climate change and increased fire risk, and ways to solve them through adaptation and mitigation.
“CFA also proudly works to reduce our own greenhouse emissions, through initiatives such as increasing our use of rooftop solar and the number of hybrid vehicles in the fleet.”
Dr Harris co-authored the research with researchers Scott Clark (from Monash University’s School of Earth, Atmosphere and Environment), Timothy Brown (Nevada’s Desert Research Institute in the United States), Graham Mills (Monash University) and John T. Abatzoglou (School of Engineering at the University of California).
The research was funded through Safer Together, a Victorian approach to reducing the risks of bushfire through fire and land agencies such as CFA, Forest Fire Management Victoria and Parks Victoria working together with communities, combining in-depth local knowledge with the latest science and technology to reduce bushfire risk on public and private land.