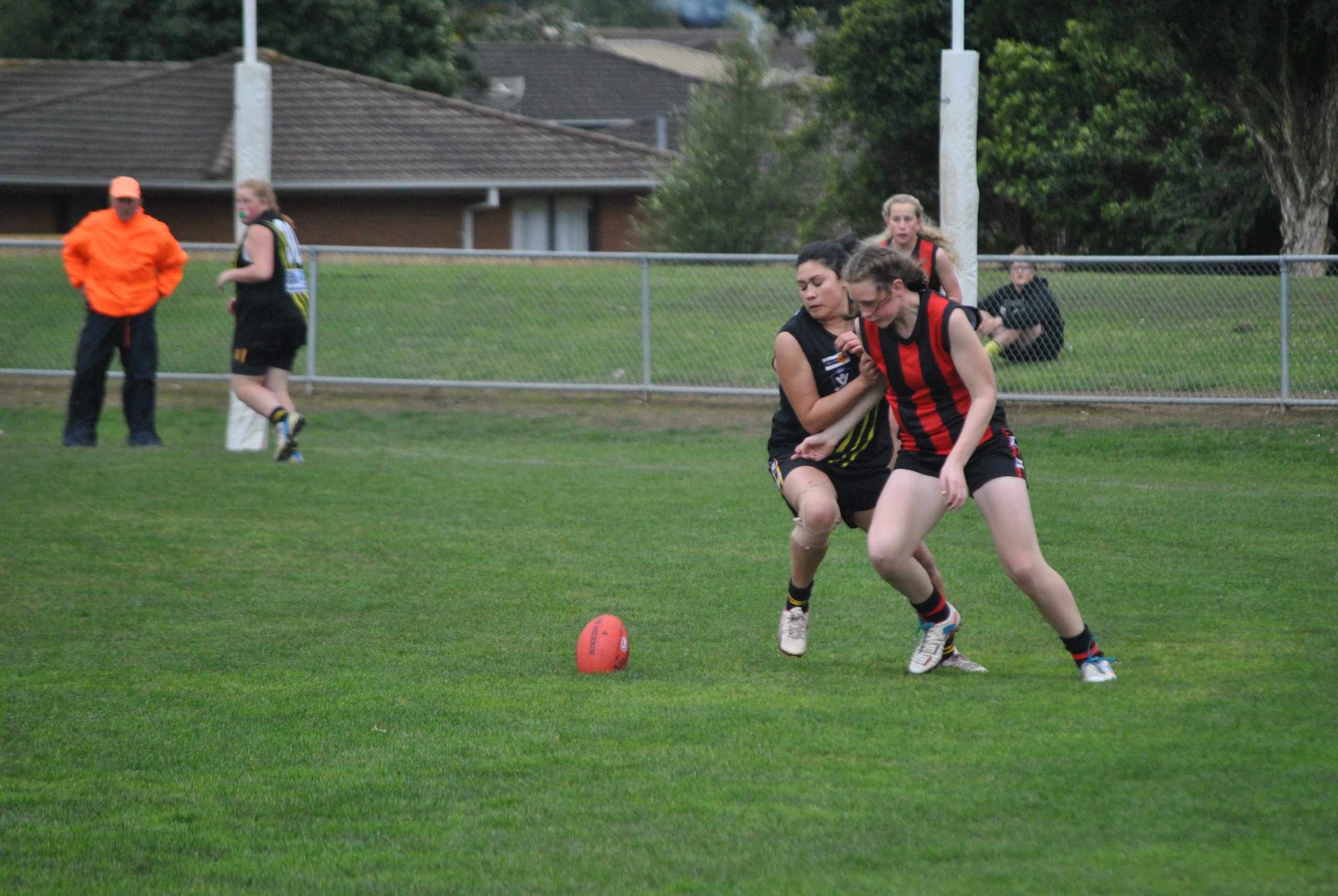 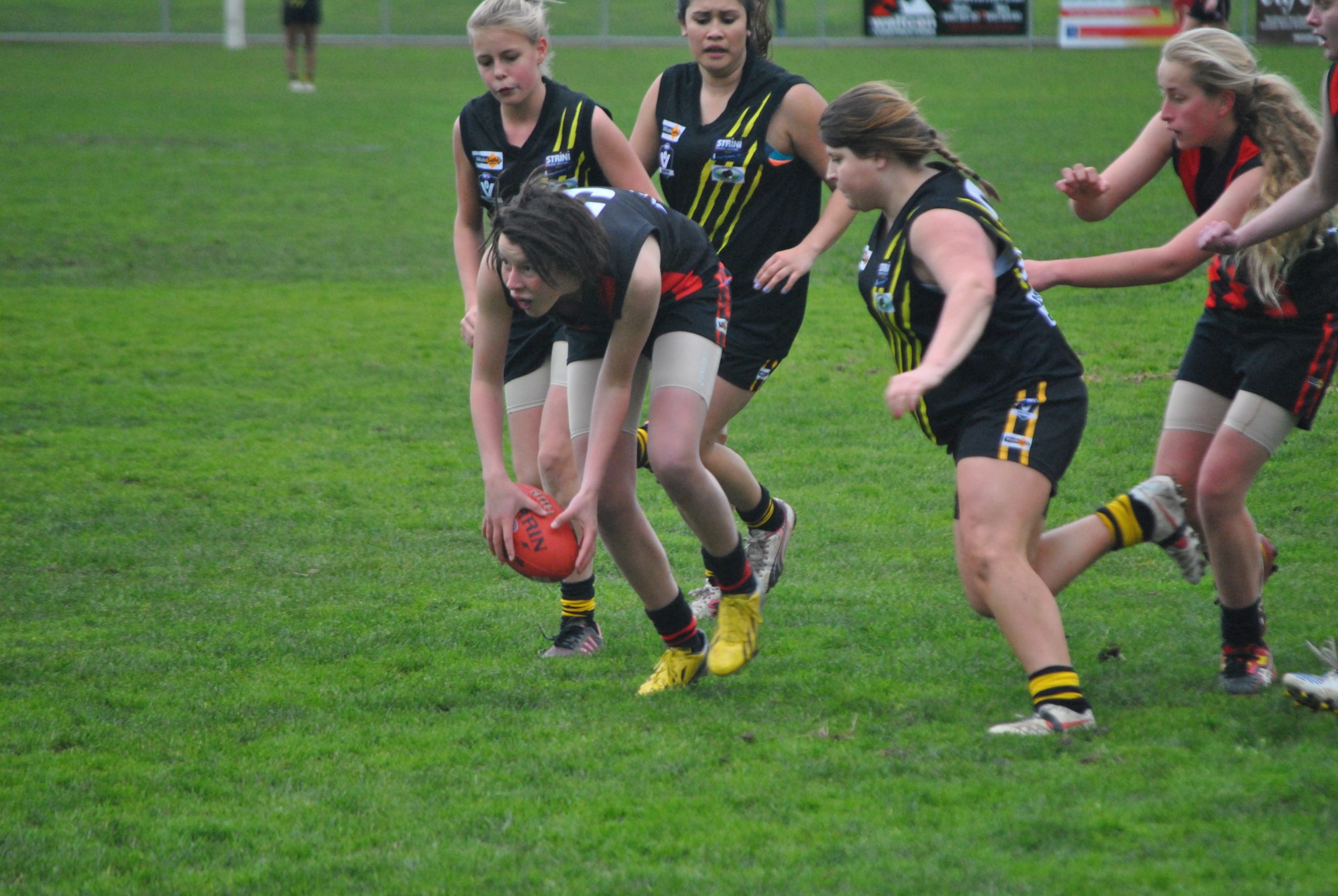 AN impressive first half set up Maffra’s win over Morwell in the AFL Gippsland youth girls semi final at Traralgon West on Sunday.

In his pre-match address, coach Luke Goldsmith urged his players to lift “five to 10 per cent” for the do-or-die clash.

“I’ve played a lot of football and I’ve only played in two grand finals, one junior and one senior,” he said.

“They don’t come around often, you earn it.

“We’ve earnt it, but today we qualify.

“In a grand final, you have to go up five to 10 per cent and we have to do that today.

The Eagles were switched on early, driving forward from the wing with Hayleigh Brennan gathering the ball in the pocket to goal. Ashleigh Lovas and Holly Whitford created a two-on-one at half forward, with the Eagles keeping the ball in the forward line but could only manage consecutive behinds.

Brennan, who finished with four goals in a best afield performance, was providing an imposing presence across half forward, marking to set up an Emily Archer goal.

Morwell midfielders Chloe Franssen and Taria Dykes were doing their best to stem the tide, with Franssen driving the Tigers forward to set up a goal against the run of play.

Rebecca Rooney was also mopping up in defence for the Tigers and if it not for her, the damage could have been much greater.

The Eagles were quick to reply, with Sarah Richardson bringing the ball to ground and Brennan finishing with a snap on goal.

Aided by a strong breeze in the first term, coach Goldsmith urged his players to re-set and start again in the second.

The Eagles were again on the board early, with Amy Dunn breaking towards goal and Georgia Collins earning a free for a hold, converting the first of her two goals.

Brennan was moved to the ruck, and set up play with big punches forward. Collins took a big hit, but Brennan chased the loose ball and centred, Mallory Dunn earning the free kick for a hold, but her shot swung wide.

Maffra responded with some hard tackling of its own, Brennan and Whitford the instigators to keep the ball inside the Eagles forward 50.

Holding a 35-point advantage, the Eagles added a further two goals in a torrid third term to ensure the match was in its keeping.

Play fluctuated between half back and half forward, with Amy Dunn cutting off many Morwell attacks, while Ashley Jans continued her good form in the midfield.

Johanna Tulloch and Emma Shaw were also prominent for the Eagles, while Lovas continued to win the hard ball across half forward.

Tempers flared at three-quarter-time, with a Maffra player sent off, the Tigers making the most of the extra player to add two consolation goals in the final term.

In the other match, Bairnsdale were too strong for Warragul.

Morwell and Warragul will meet in a consolation final on Sunday at 3.30pm, while Maffra will take on Bairnsdale in the grand final at 4.15pm. Both matches will be played at Traralgon West.