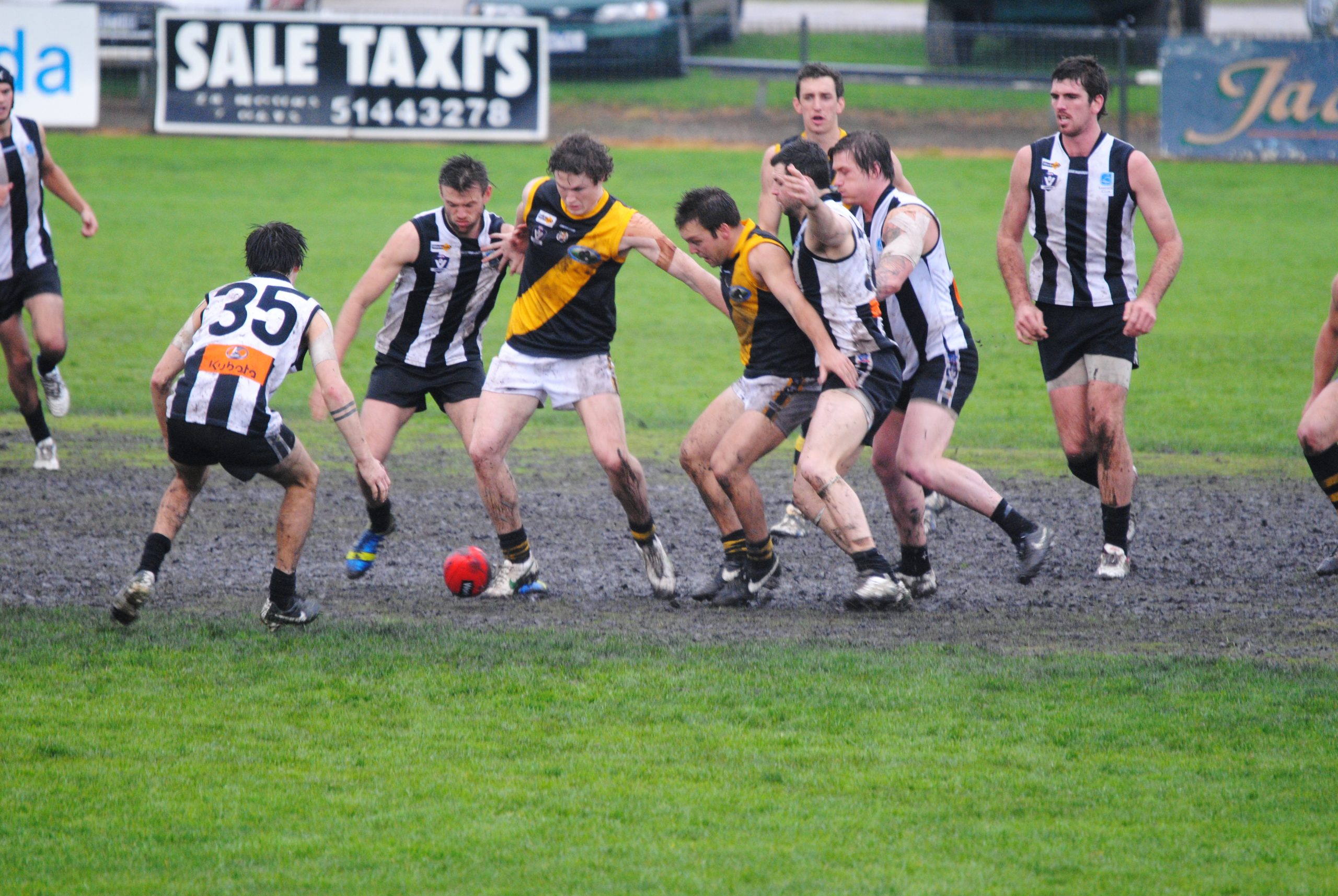 THE Gippsland League football minor premiership is up for grabs on Saturday when Morwell hosts Sale.

The Magpies lead the Tigers by one win on the ladder, with Saturday’s victor to claim top spot and a psychological advantage heading into the finals. The winner will also take a week off as the finals begin.

In wintry conditions in round nine, the Magpies controlled the game until a stunning Morwell comeback in the final quarter saw the Tigers hit the front during time-on, only for a late goal to give Sale a four-point victory.

Last weekend, the Magpies only conceded a behind during the first half on their way to a 122-point win over Warragul. The ladder leader will obviously get a harder test on Saturday.

Morwell was pushed by a Traralgon side fighting for its season, winning by 15 points after leading by 32 points early in the final term.

The Tigers finished the game without fit players on the bench thanks to injuries to key defender Julian Blackford, playmaker Adam Bailey and Campbell Macinnes.

Despite the setbacks, the Tigers showed resilience to run hard to claim victory with Tom Crosby providing great service in the ruck.

MAFFRA will view its home game against wooden spooner Drouin as a chance to take some momentum into the finals.

Last weekend’s loss at Wonthaggi cost the Eagles any chance to booking a place in the qualifying final.

Now in fifth place, the Eagles have lost three of their past four games.

Regardless of Saturday’s result, the Eagles will be playing Bairnsdale in the elimination final next weekend.

Darren Sheen will need to kick an almost club record if he’s to become the first player in this league to boot a century of goals during the home-and-away season since Sale’s Shane Loveless in 1987. Should Sheen manage to kick nine goals tomorrow, he will be the fastest ever to 200 goals in this league.

Sheen kicked 13 goals against the Hawks in round nine as the Eagles conceded just two goals to win by 160 points.

The Hawks are coming off a 153-point hiding from Bairnsdale.

WARR AGUL could be playing its final senior match in the Gippsland League on Saturday when it hosts finals-bound Wonthaggi.

The ninth-placed Gulls have applied to speak the Casey-Cardinia league about a transfer.

The Power, on the other hand, are preparing for the qualifying final next weekend.

In round nine, the Power defeated the Gulls by 167 points.

BAIRNSDALE will prepare for the elimination final against Maffra when it hosts Moe.

The Redlegs snapped a four-game losing streak last week against Drouin, in the process making sure of a finals berth.

The Redlegs haven’t had things all their own way in recent times against the Lions, winning by 13 and 24 points last year and needing a strong second half to secure victory in round nine.

Bairnsdale is coming off a big win over Hawks, while Moe lost to Leongatha by 30 points.

BOTH out of finals contention, Leongatha and Traralgon will look to finish the season on a winning note.

Their round nine loss to Leongatha turned out to be a major factor in the Maroons missing out on the finals. Despite the Maroons having six more scoring shots, the Parrots won by 19 points.

The Maroons’ hopes were finally ended by Morwell last weekend.

Losing by 15 points, the Maroons showed glimpses of their best form, which has been missing for large parts of the season.