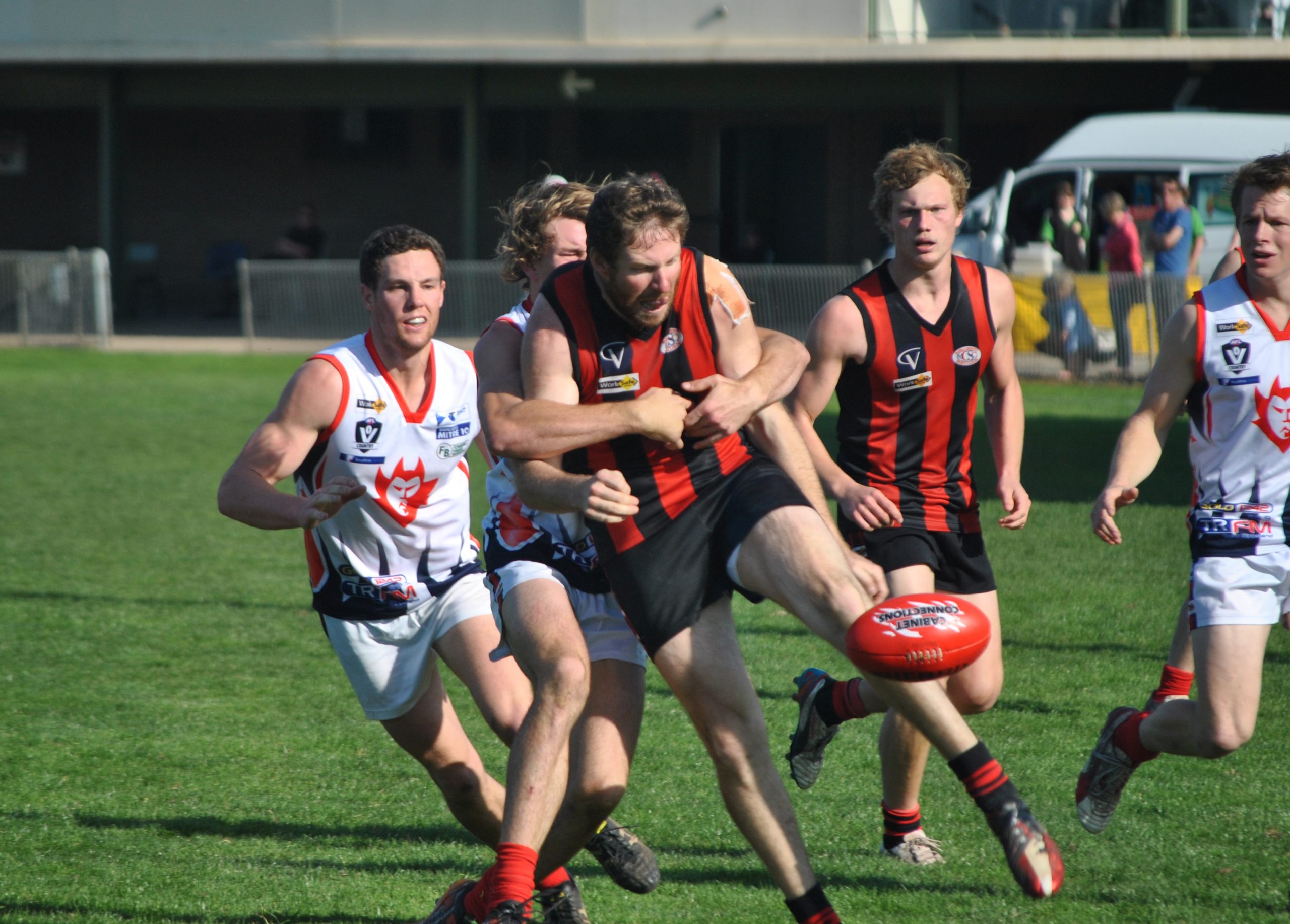 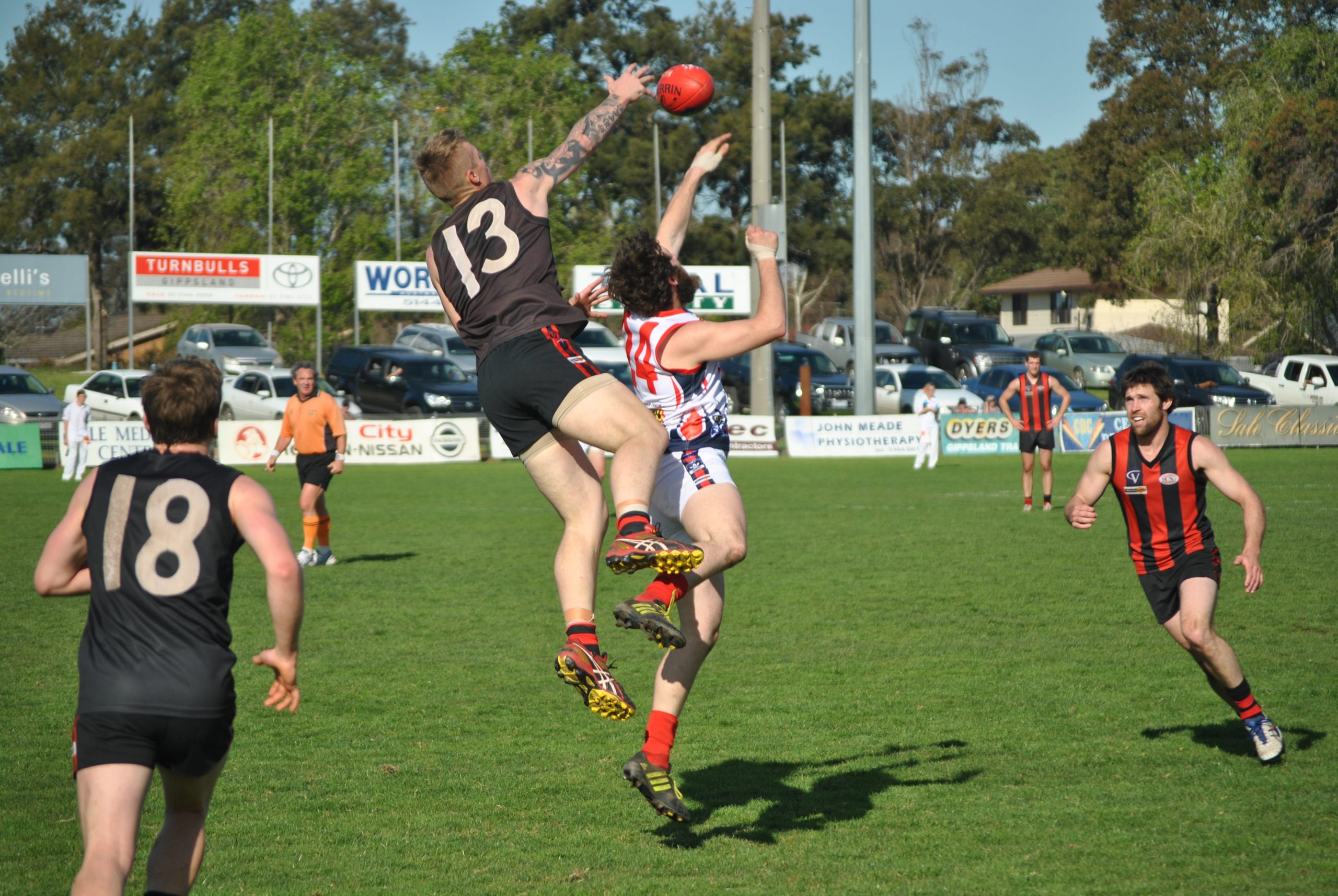 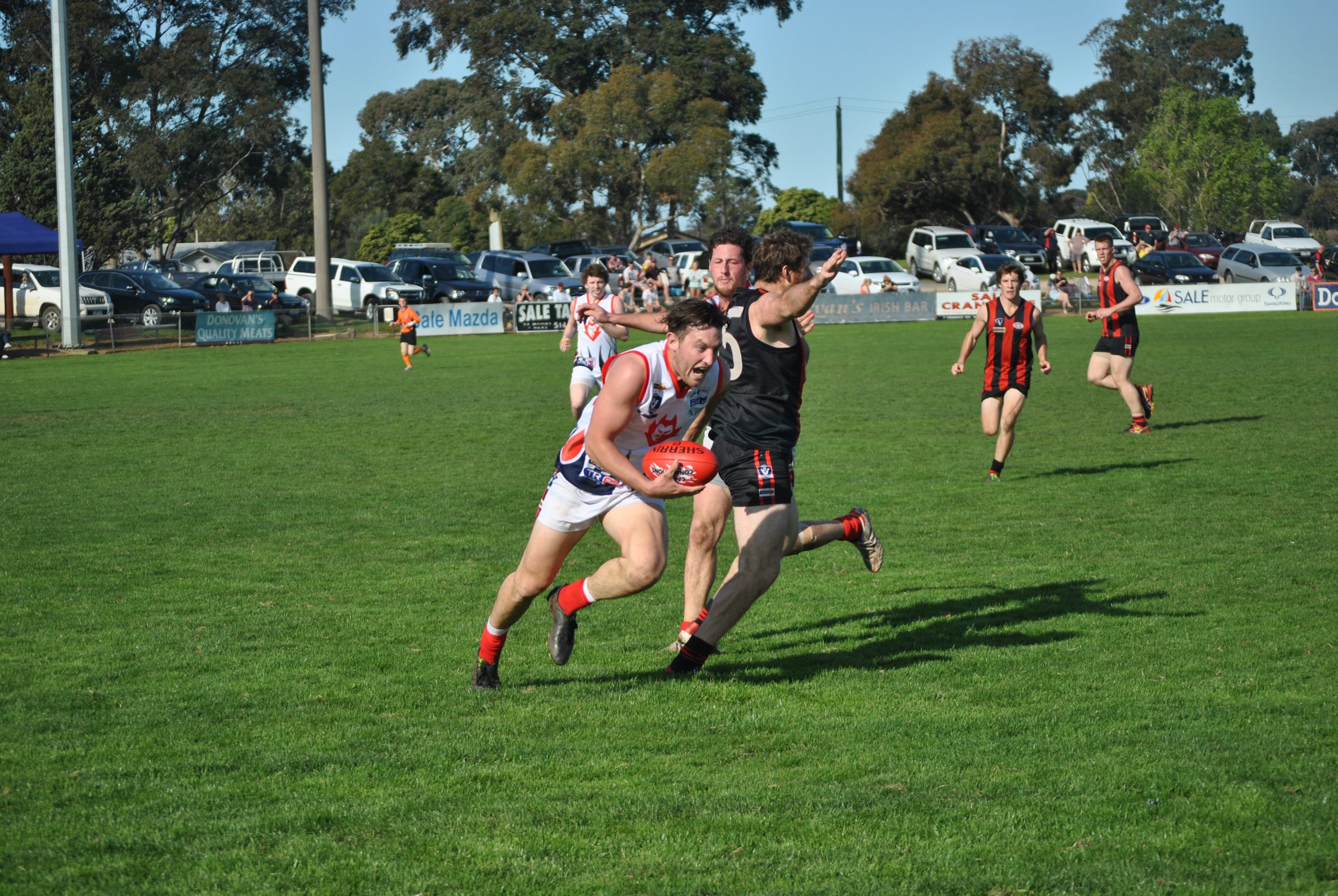 The fact Bairnsdale had one more scoring shot but lost by 19 points proved a telling factor, the Redlegs simply not making the most of their opportunities while the Eagles did.

The match went goal-for-goal for much of the first half before the Eagles gradually broke away in a contest soured by an ugly incident during the third quarter. Tempers flared when Bairnsdale’s Bayden Ashwood felled Maffra’s Alex Carr behind the play, with Ashwood yellow-carded by the emergency umpire following the incident.

Fortunately for Maffra, Carr, who had been playing an excellent game, was able to return to the field.

Kicking to the Macarthur St end with the aid of a slight breeze, Bairnsdale had the running early in the contest, getting numbers to the contest and breaking away but could not capitalise on the early opportunities, scoring the first two behinds of the match.

Carr led the response for the Eagles, driving the ball forward which resulted in Maffra’s first goal before good work from Daniel Bedggood saw the Eagles kick their second major.

Kel Porter won the resultant centre clearance, passing to Jackson Scott who hit the leading Darren Sheen lace out. Sheen, who looked dangerous from the outset and finished with seven majors, duly converted to give the Eagles the early break.

Bairnsdale made another run, with Jack Vickers finding space and taking a sliding mark to boot the Redlegs’ first major.

With play fluctuating between each sides’ half-forward line, Maffra’s defence was a highlight, with Ben Batahla providing rebound from half-back and Carr running down his Bairnsdale opponent to stop a certain goal.

Bairnsdale’s Jack Haslam finally found some space and goaled before Alex Saunders ran on to a loose ball over the back to put the Redlegs in front.

Dan O’Brien won a free for high contact and delivered to Sheen for the immediate response, before Sheen again found space to put the Eagles back in front.

The Redlegs made one final attack, Wes Russell reading the flight of the ball best to mark and goal on the siren to give the Redlegs a two-point lead at the first change.

Sheen put the Eagles back in front early in the second term, leading the race for the ball and converting with a clever hack in mid air.

The Redlegs again responded, Vickers going long to the top of the square with Russell taking a strong contested mark and converting.

The see-sawing nature of the contest continued, Sheen following up with a snap before the Redlegs rebounded from defence and took the ball the length of the field to goal.

Brent Connolly cut off a Redlegs attempt to switch play, converting after earning a 50 metre penalty to give the Eagles a handy 14-point buffer at half-time.

Sheen continued to look dangerous, converting early in the third term from a contested mark before Carr was felled behind play, sparking the Eagles.

Connolly goaled and umpires had to restore order before resuming play. Bayden Ashwood sent off by the emergency umpire following the ugly incident.

Sheen lead up the ground, dishing off to Jacob Weatherley who found Connolly for another Eagles major.

A good shepherd from Scott allowed Brad Caldwell to convert with the Eagles taking a 21-point lead into the final change.

Eagles coach Wayne Butcher urged his team to continue running and to take risks, while Redlegs counterpart Shaun Mooney was confident his side had enough in the tank to overrun the Eagles.

Sheen goaled following a strong contested mark to give the Eagles the early ascendency before the Redlegs capitalised on an Eagles defensive punch towards goal to keep their fading hopes alive.

Sheen would have a hand in the next goal to sink the Redlegs, passing to Batahla after a strong contested mark.

Sheen led the way for the Eagles with seven majors, while the speed of Carr and Scott troubled the Redlegs midfielders. James Huts and Batahla were good in defence, while Connolly was dangerous when drifting forward.

For the Redlegs, Dale Johnson was good in defence, Brett Waddell provided drive from the midfield while Bryce Mitchell, Sam Pickett and Jack Vickers set up opportunities forward of centre.