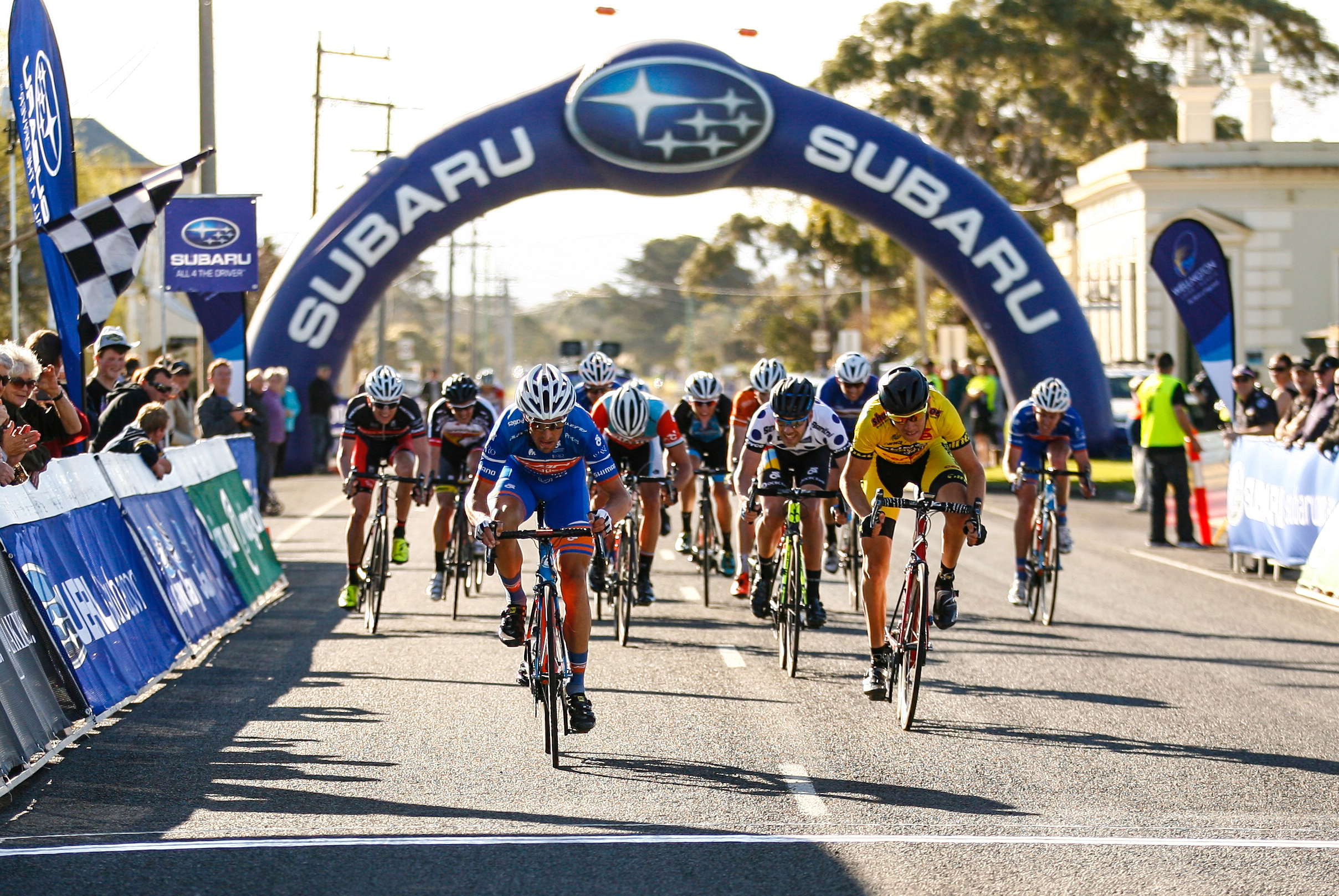 GERMAN Raphael Freinstein stole the show on the penultimate stage of the cycling Tour of Gippsland.

Freinstein now leads the tour after taking advantage of a late crash in the peloton to steal line honours in Metung ahead of Alex Smyth and Ryan MacAnally.

“We knew it was going to be a really fast finish and with the speed humps on the road, there was a crash and I just got through it,” Freinstein said.

“I was lucky because Brenton Jones, one of best sprinters here in Australia, got a mechanical after the crash and Jesse Kerrison was stuck behind the crash as well, so it was an easy sprint for me in the end.”

After being a part of the winning breakaway on stage four, Freinstein began the day seven seconds behind overnight Tour leader Joe Cooper, while Tim Roe was second by a single second.

After 72 kilometres of racing, Roe showed he is in the best form of 2014 by winning the intermediate King of the Mountain time bonus, ripping the tour lead from Cooper’s grasp mid-stage.

However it was 23-year-old Freinstein who stole the show, dodging a fall inside the final kilometre to pick up the maximum amount of bonus time, enough to clinch the yellow jersey.

“I managed to take some time bonus’ in the first intermediate sprint which moved me closer to the podium, and then the top three on the general classification got time on the King of the Mountain so I told the boys that the only chance I had to move into the lead was if I won the stage. They did a fantastic job,” Freinstein said.

Freinstein leads the tour by two seconds to Roe and three seconds ahead of Cooper with one stage remaining.

“I have good form and the team are really motivated. A two second lead is not much, but we’ll do everything to keep the yellow.”

New Zealand’s Patrick Bevan was awarded the most aggressive jersey after riding 15 km solo during the stage.

ON Friday afternoon, the yellow jersey has changed hands for the third time, with New Zealand’s Joe Cooper clinching victory in Port Albert to take the tour lead.

Cooper is the third person to have led the tour, which began in Warragul on Wednesday, after his teammate Scott Law claimed the opening stage before Jesse Kerrison clinched stage three and the jersey in Sale on Friday morning.

However it was Cooper who was strongest in the afternoon’s race from Sale to Port Albert, crossing the line moments ahead of a charging breakaway group.

“I hit the group with 2km to go and I got into time trial mode, the break hesitated a bit so I was able to get away. I didn’t think I would have the legs but I lunged for the line just in time,” said Cooper who is the reigning Oceania time trial champion.

The tour is Cooper’s first National Road Series event after fracturing his pelvis at the Tour of Toowoomba nine weeks ago.

“This means a lot to me,” said Cooper. “The last nine weeks have been very hard to just be on the sidelines watching and I had to put in a whole lot of hard work to get back to where I am.”

Cooper was part of a 14 man chase group who crested the 8km major climb of the day ahead of a splintering peloton.

The bunch chased hard to catch a five man breakaway which had been away from the gun.

With 50km left to race, the two lead groups joined and rode aggressively to the line, catching out the sprinters and general classification contenders who were left in the chasing peloton.

At one stage the peloton looked about to catch the escapees before attacks from Avanti, who had four represented in the break, ensured the pace was kept high inside the final 10km.

“The aim was to have me hurting on the climb so then we knew it would be a super hard tempo, and that got rid of all of the sprinter type riders who could attack us on the flats.

“There was no way we were letting that peloton back after the amount of effort we put on up the hill,” remarked Cooper.

THE tour concludes in Traralgon on Sunday with a 45km criterium.