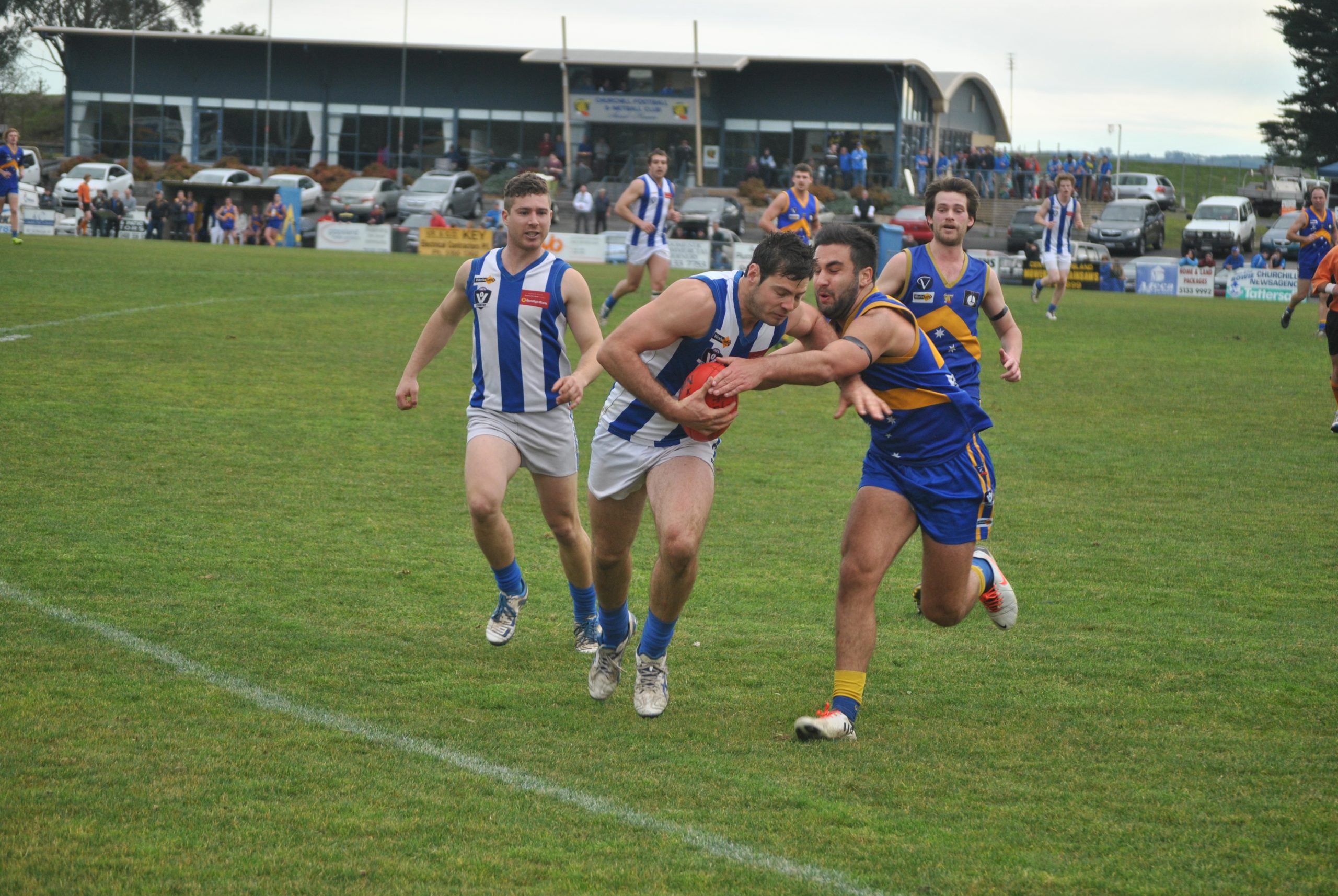 HEYFIELD will be looking to complete a perfect season and claim the North Gippsland football premiership on Saturday.

The Kangaroos will meet Churchill, which is chasing its first senior flag in five years, in the grand final at the Traralgon Recreation Reserve.

The Kangaroos dominated the competition early, convincingly defeating Glengarry in a round one grand final rematch. Their dominance didn’t diminish as they went through the season unbeaten.

In the second semi-final a fortnight ago, the Kangaroos defeated the Cougars in convincing fashion, 42 points, for the third time this year.

Churchill’s challenge for the premiership came to life when they won 10 straight matches, a run that was halted by the Kangaroos.

In the preliminary final last weekend, the Cougars dug deep against a dogged Sale City outfit thanks to an inspired performance by forward Brendan Holt during the final term.

Three goals in 15 minutes from Holt, who returned after a two-week break from injury, sparked a Cougar revival.

Cougars coach Allan Chandler said he was happy with the way his side battled throughout the preliminary final.

“Halfway through the year we were hoping to be in the big dance, we are there now and we will give it everything that we have got,” he said.

In his first season as Cougars coach, Chandler said he won’t be losing sleep over his side going into the clash carrying the underdog tag and perhaps will relish the pressure being placed on the opposition.

“We are definitely the underdog this week, Heyfield are unbeaten and have absolutely smashed us the last two times,” he said.

“They have good players covering every line and we will need to play to our absolute best to compete with them.

“We will need to have our match-ups spot on and will need some players to step up and take down a more highly rated opponent this week.”

Heyfield co-coach Damien Birss said the Kangaroos would have a “red hot crack” at claiming their second title in three seasons, but knew the grand final would be a tight, physical contest against a side confident of its chances.

“While we have won all the other times, you just can’t think that we have got it won, it doesn’t work like that,” Birss said.

“They have been one of the best teams all season and we will need to beat them for a fourth time.

“It’s definitely not going to be one-way traffic like many are anticipating, they are a quality team and it will take a lot to beat them.

“Previous results account for nothing, it doesn’t matter or mean anything that we are undefeated, it boils down to this week alone. The win this week is all that counts.”

With only eight players in this year’s squad yet to win a premiership, Heyfield’s depth and experience has long been the envy of opposition sides.

In their second year together at the helm of Heyfield, Birss and Adrian Cox have cemented the side as one of the marquee teams in the competition. The Kangaroos have made three straight grand final appearances, with a mere goal in extra time stopping them from claiming back-to-back titles last year.

“It’s hard to win a grand final, you need things to go your way and we are up against tough opposition,” Birss said.

“Churchill are a dangerous team, their players are renowned for stepping up, they can’t be underestimated. Our guys are hungry to finish off with the result on Saturday, to go through undefeated and win it would be awesome but we have to get on with the job and not get too far ahead of ourselves.”

While there are a number of playmakers the Kangaroos will need to closely guard, Birss said his side would focus on playing its brand of footy.

“Holt is one that we haven’t come up against recently, but we can’t really focus on just the one player. We need to get out balance right across the board,” he said.

“They have a number of other good running players that, if we don’t pay respect to, we will be in for a hard game.”

The Kangaroos’ midfield perhaps holds the edge over Churchill.

League team of the year members Josh Stubbe and Jack Woodland can quickly turn a game and were instrumental in Heyfield’s semi-final victory. Daniel Saunders also stood tall in a best-on-ground performance that day, drilling the ball into the three-prong forward structure.

Jesse Bedggood has been the star forward in the side’s previous three meetings against Churchill, booting 12 goals, including six a fortnight ago.

With their run setting up play, Stubbe, and Mitch and Nic Dowse are likely to gain the attention of Churchill taggers.

While Heyfield’s engine room is impressive, it will meet classy opposition with Andrew Brown, Travis Brighton and Chris Williams the main instigators in the Cougars’ dominance of the centre clearances throughout the final series.

Brighton will be committed to winning the contested possessions, Chandler will be marshalling the back line in his usual fashion, while Brandon Mahoney is likely to shade one of the Kangaroos’ key playmakers while endeavouring to break lines and set-up Nick Campbell, Tim Darby and Holt in front of goal.

HEYFIELD and Cowwarr will play-off for the reserves premiership.

The Kangaroos will play in the reserves grand final for the eighth time in 10 years, yet they have only tasted success three times since 2005.

With only one loss this season, the Kangaroos and will go into Saturday’s contest confident of defending their title.

The Saints were impressive in holding strong against Churchill in the preliminary final.

CHURCHILL and Traralgon-Tyers United will meet in the thirds.

Both sides travelled through the season rarely troubled by the opposition each week. They split their two meetings this season.