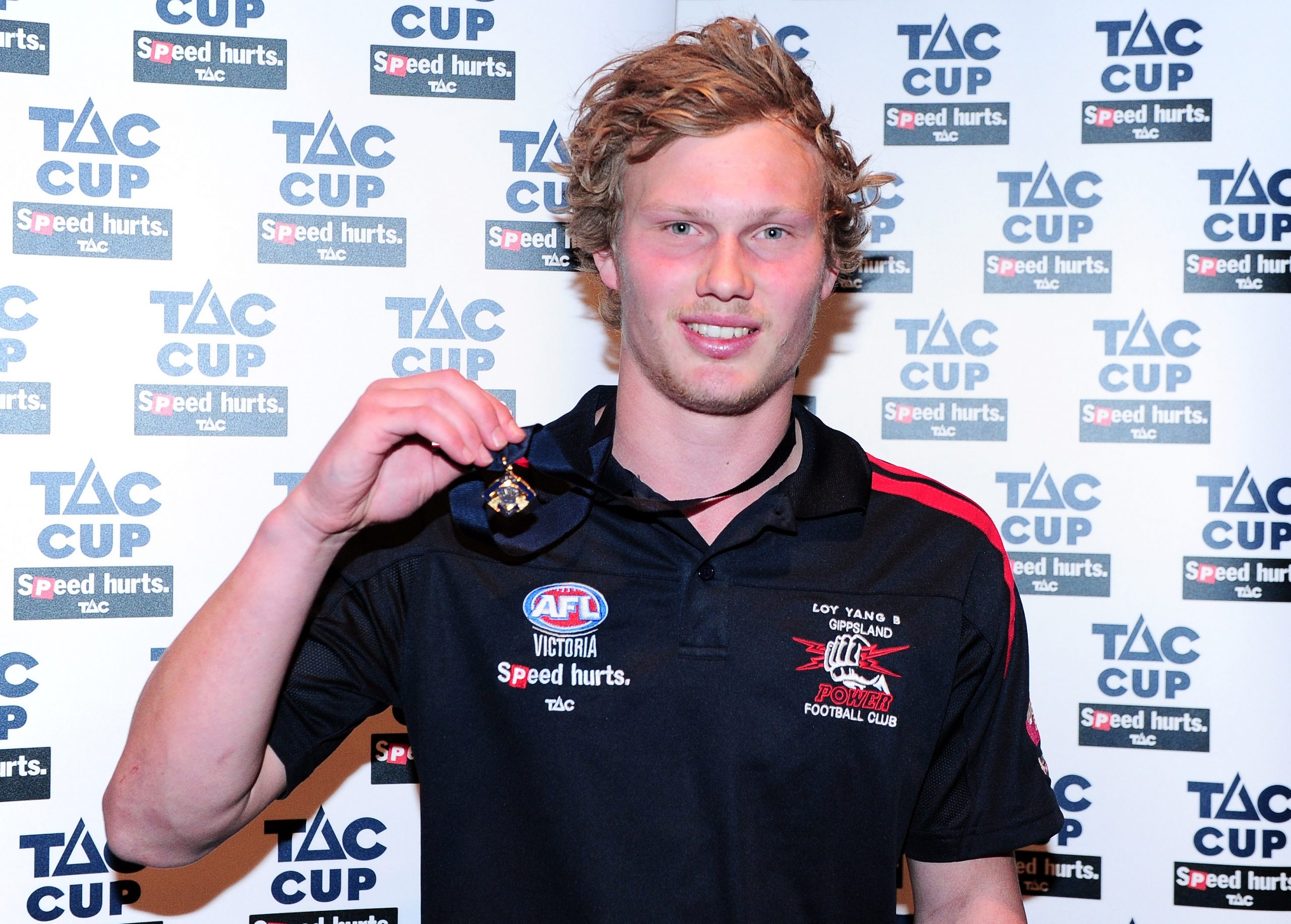 DYNAMIC Maffra midfielder Alex Carr joined an elite group of Gippsland Power players when he announced as a deserved winner of the TAC Cup’s prestigious Morrish Medal for the best-and-fairest player.

As well as the Morrish Medal, he was runner-up by one vote in the Coaches Award and was named as the centre man in the TAC Cup’s Team of the Year.

Despite being justifiably nervous and a little taken aback by his award, Carr spoke very well when interviewed after his win and had the composure to thank the people he believed were critical in helping him during the season.

As well as thanking his parents and his uncle John, he made special mention of his coach Leigh Brown, Power talent manager Peter Francis and his wife Robin and the members of the Power support staff.

Fittingly he made special mention of the invaluable contribution made by the team’s mid-field coach Scott McDougall.

This recognition capped off a stunning season for Carr, where he was the on field leader for the team with his continuous positive support for his young team mates by voice or by superb actions. His ability to inspire others was reflected by the unique relationship he developed with Sale youngster Nash Holmes who joined him in the midfield and became his partner in terms of commitment to win the hard ball, applying intense pressure on opponents in the tightest situations and the ability to consistently win 20-plus possession per game.

As a reflection of his contribution to the team, he topped the elite competition in terms of several key statistical measures such as clearances, contested possessions, kicks, tackles and free kicks won.

It was a rare occasion if he didn’t hand the ball back to the umpire in the cauldron of tight contests and never flinched when he had the chance to put his body on the line to win the ball or to receive well deserved free kicks.

Once he won the ball in such circumstances his ability to kick the ball long and direct in the corridor was a huge bonus for the team. Either off one step and often under huge pressure or when able to break free, his penetrating kicking meant that the forwards often found themselves one out and able to have a good chance to win the contest.

The real inspirational bonus for the team was his ability to kick the long goals from outside the forward 50 and his team mates often fed him the ball to allow him to do so.

Carr came through the Power’s junior development programs and was primed to begin his TAC Cup career in 2012 when nagging injury limited his number of games to a mere handful.

He bounced back in 2013 where he established himself as a key member of the Power’s respected midfield unit.

At the end of the season he was approached by Peter Francis to return this year as one of the side’s 19-year-old players along with Liam Nash and Declan Keilty.

From the beginning of the season he took on the role with stunning effect in terms of his individual performance as well as the ability to lead the team in key performance areas.

His willingness to take his football to an even higher level is a great reflection of the skill of Peter Francis to select the right players for the “older player” system of the TAC Cup.

Regardless of the results of the AFL draft processes later this year, Carr has already made some arrangements for his immediate footballing future. He is hoping to join his brother Ed at stand-alone VFL powerhouse Williamstown.

In doing so, he will join the highly rated “Power mafia” at the club, with Nick Sing, Jack Johnstone, Shaun Wyatt, Simon Deery, Dale Houghton and Josh Cashman also on its books.

Carr excelled when playing for Casey against the strong Port Melbourne unit a few weeks ago.