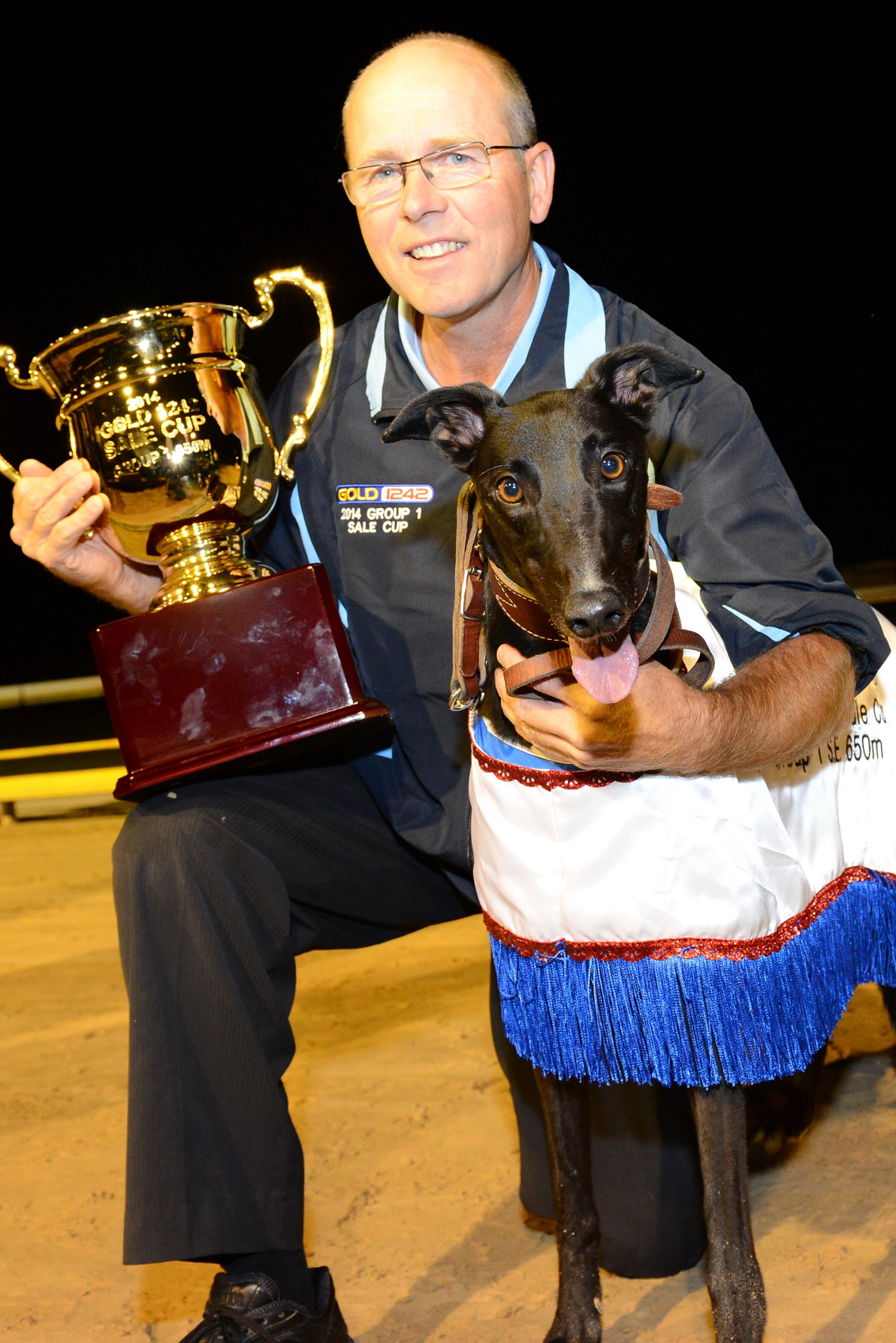 THE versatile Star Recall produced an all the way victory in the final group one greyhound race of the year, the 650 metre Sale Cup.

Star Recall (box 4, $4.70), trained by Jeff Britton, was an early favourite for the only Group 1 event in regional Victoria but jumped second elect behind reserve Sweet It Is.

Sweet It Is came into the field following the scratching of Zipping Spike due to a hock injury.

It didn’t bother the former West Australian chaser as she speared the lids and was never challenged on her way to the $75,000 first-prize.

After the race, Jeff Britton said that everything went right in the race for his star greyhound.

“She came out really well and from there everything went right,” he said. “I was a little nervous when I saw Robert’s dog (Rob Britton’s Space Star) behind her but she held on really well.”

Britton revealed that the TAB Melbourne Cup finalists run in the heats last week took a bit out of her. “The run last week flattened her a bit so we’ve done very little with her this week and let her rest up.

The veteran trainer also mentioned that the daughter of High Earner and No Recall could potentially be moved up to the staying trip when she goes back to Perth.

“Linda (Linda Britton, Star Recall’s trainer in Western Australia) will make the call on where she goes to next,” the Anakie trainer said.

“It could be either the Perth Cup (530m) or the Galaxy (715m) but I think given what she has done over the middle distances it would be better to step her up to staying.”

The race began with Star Recall jumping straight to the lead with other greyhounds tangling behind her.

When Star Recall turned her lead was big enough to hold off the fast finishing Space Star while Sweet It Is rattled home for third.

Star Recall is raced by Kevin Dover and trained by Jeff Britton. She has raced 44 times for 25 wins and 11 placings. Her stake earnings stand at $256,055.

The seemingly bold move in 2001 to run the Sale Cup over the 630m journey, with a first prize of $20,000, produced an outstanding result with brilliant front running stayer, Bentley Babe, etching her name on the Cup honour role.

Again in 2003 a major track restructure unveiled a brand new circuit on April 10, extensive work had been carried out after it closed in January.

Under the guidance of track designer Brian Barrington Sale had an extreme makeover, with the new distances becoming 440, 520 and 650 metres.

The track was also widened to seven metres, with both straights being realigned.

The cup in 2010 became the richest country cup in Australia with a first prize of $50,000 and in 2011 it maintained its Group 1 status lifting the first prize to $75,000 which will be maintained in the future.