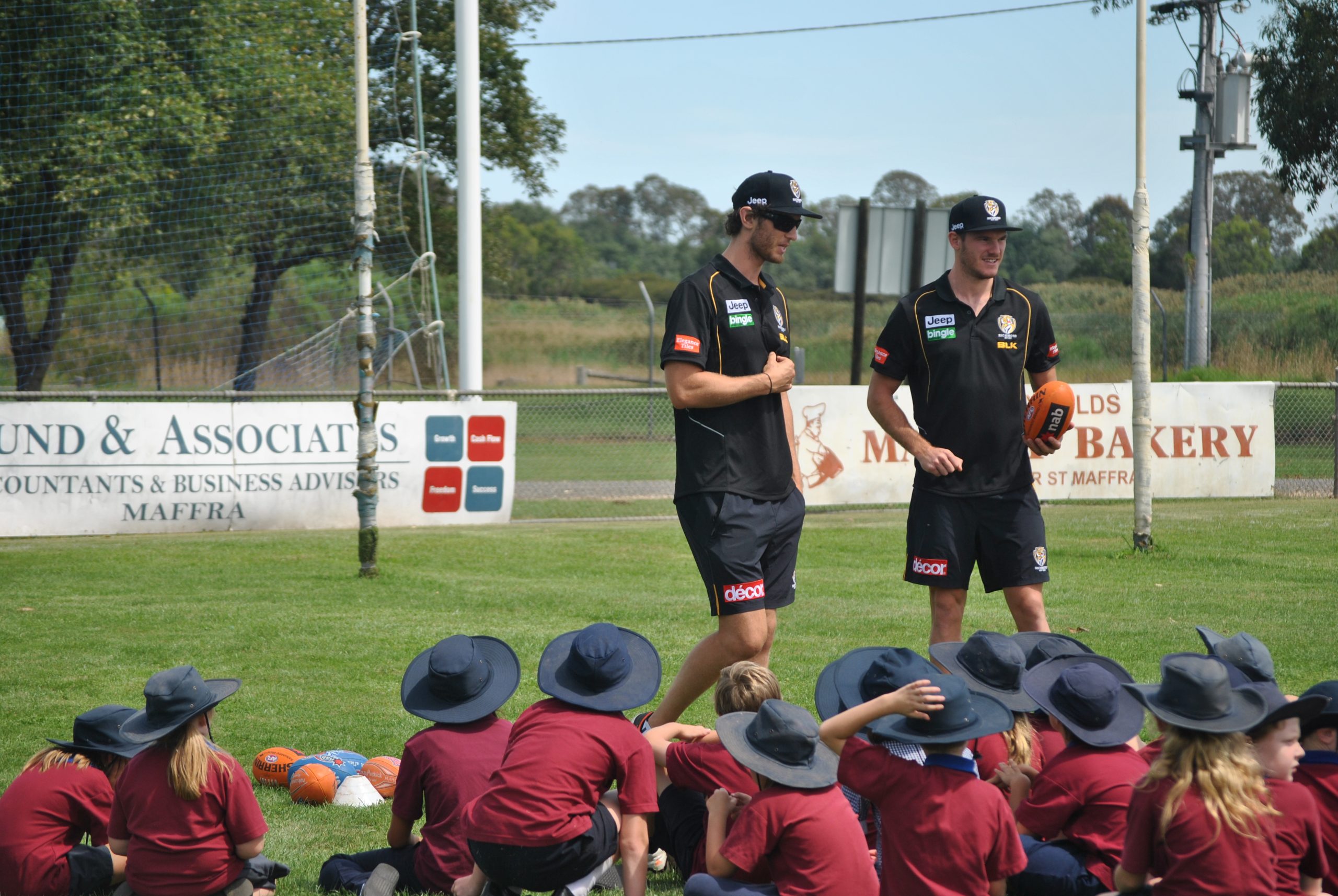 EAST Gippsland is becoming somewhat of a home away from home for the Richmond Football Club, with about a dozen players returning to the region on Monday to conduct clinics in Sale and Maffra for local school children.

Players including Ivan Maric, Brandon Ellis, Shaun Grigg, Tyrone Vickery and Nathan Gordon were on hand to pass on some tips and answer questions for the more than 700 children who attended the sessions.

The students were taken through a number of drills by the players, before they had a chance to snag an autograph and take some photos.

Richmond midfielder Gordon said the players really enjoyed getting out into the community.

“We always get good turnouts and the kids are energetic and we try to spend as much time out in the community as we can,” he said.

“We’ve done two clinics and there’s about 12 of us here, but we’re all split up to go to different rural areas and it’s nice to change it up a bit and see all the kids.”

The super clinics are organised by AFL Gippsland and come less than three weeks after the Tigers last travelled to the region for their AFL Community Camp.

AFL Gippsland football development manager Ryan Evans said the camps were important to spread the game and to get more kids involved in AFL.

“There was probably years when we didn’t have a lot of players down this way, so it’s great that we can get the players out here,” he said.

“I know (Damien) ‘Dimma’ Hardwick was pushing on his players to make sure they get involved and you can see David Astbury over there getting the kids fired up … I think they enjoy getting back to their roots as well and involved in the community.”

The super clinics were among seven to be held throughout the Gippsland region this year and come in the lead up to Essendon and St Kilda doing battle in an AFL pre-season match at Morwell on Saturday. Gates open 3pm with the match beginning 4.40pm.

Despite a loss to the Western Bulldogs in round one of the pre-season last weekend, Gordon said he was excited about the Tigers’ prospects in 2015.

“(My) early goal is to get through the NAB cup, play every game and perform well to get that round one spot, but on the whole the club’s been training well for the whole pre-season, so we’re really excited for the campaign this year.”

Richmond will kick off the 2015 season with a traditional Thursday night clash against rivals Carlton on April 2.