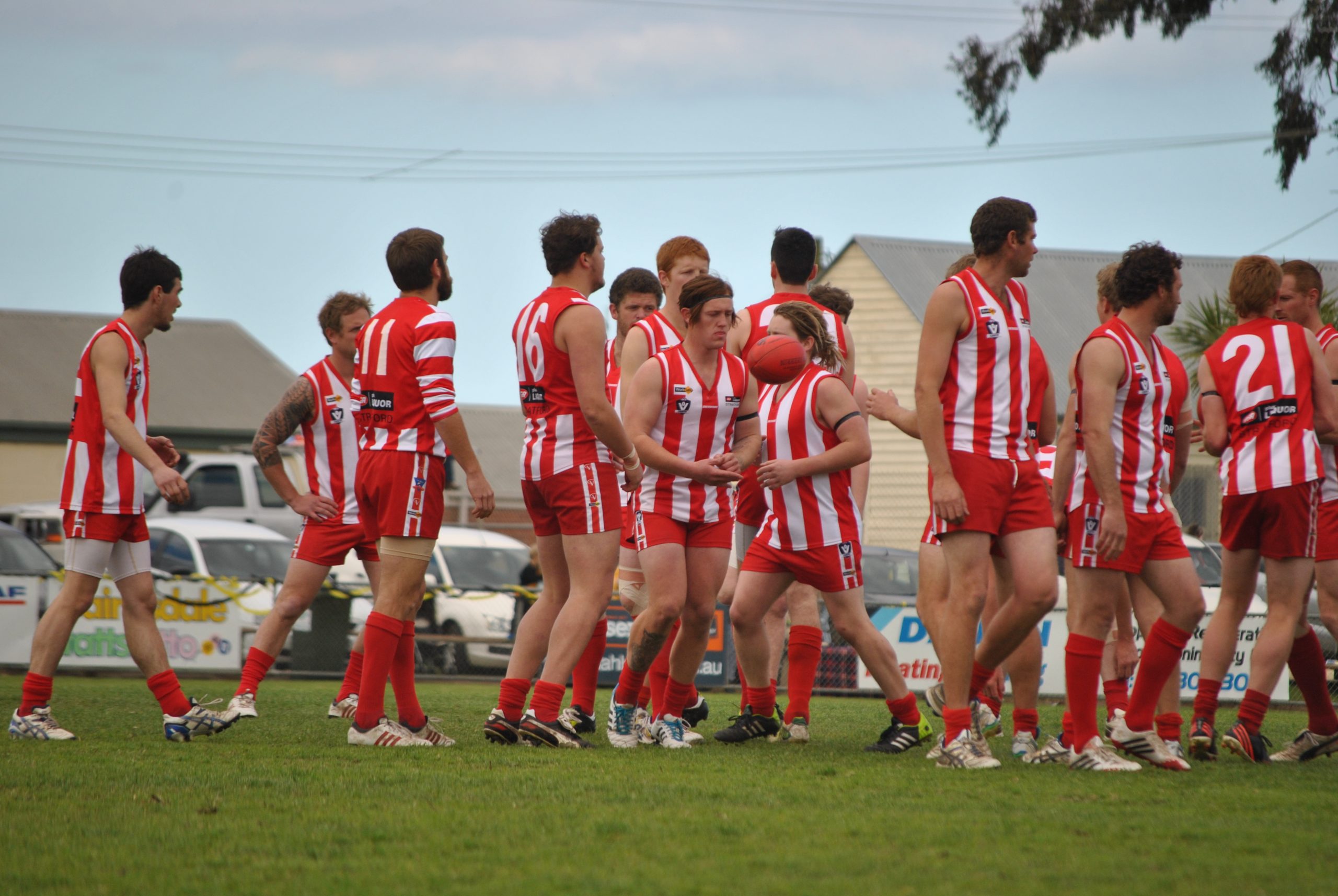 STRATFORD will again be among the teams to beat this season, aiming to defend its 2014 senior premiership with coach Peter Morrison remaining at the helm.

The club is coming off a successful 2014 campaign, winning six of the nine football and netball premierships on offer across the East Gippsland league.

The Swans have maintained most of their premiership list and will be further bolstered by the inclusion of Robert Hannah from Western Australia, Alex Munroe from Boisdale-Briagolong and Scott Dare from the Tasmanian State League.

Gavin O’Shanassy will continue as reserves coach following last year’s premiership. The Swans will begin their premiership defence at home against local rival Boisdale-Briagolong, where they will unfurl premiership flags before each grade.

From the coach: “I reckon we’re probably a bit underdone. We’ve done well in retaining the core group, we’ve got some really talented young kids who will rejuvenate the group. We’ve worked really hard to retain the same nucleus of players and I expect we’ll be thereabouts again, it’s just all about how hard we work.” – Peter Morrison

AFTER crossing from the North Gippsland league, Boisdale-Briagolong is somewhat of an unknown product which will be determined to put in a competitive showing in its first season in the competition.

Matt Lee will coach the senior side, which will be bolstered by the inclusion of ruckman Owen Booth from Maffra, while fellow Maffra recruit Jason Langshaw will also add some height.

Danny Gray has been reappointed after taking the reserves to North Gippsland finals in 2014, while Danny Pratt will coach the under 18s. A lack of numbers will mean the Bombers won’t be fielding an under 16 side this season.

The Bombers will take on local rival Stratford in round one, with their first home match coming against Paynesville in round two.

From the coach: “I think it’s definitely a step forward for the club. We’ll be a bit more competitive coming into a new league, but I’m not saying we’ll dominate, we’ve got a lot of work to do before we get anywhere near that.” – Matt Lee

WY Yung will aim to continue its improvement and go one better in 2015, after a heart-breaking three-point grand final loss last year.

After narrowly missing finals in 2013, the club recruited strongly to finish runner-up in 2014 and has again looked to bring in recruits to fill gaps identified in the playing list.

Former Gippsland Power and Casey Scorpions midfielder Alex Saunders will add a touch of pace and class, while Daniel Hayes comes across from Paynesville and Andrew Rooney joins from Bruthen.

Using last year’s disappointment as motivation to drive their season, expect the Tigers to be among the frontrunners come finals time.

From the coach: “We’ve had probably a better pre-season than last year, we’ve lifted the work rate up a bit more and we’ve got some good kids coming through and there’ll be opportunities for them. We recruited in the areas where we thought we fell down last year, particularly through the midfield. The group’s pretty keen and excited, and last year’s grand final loss is pretty good motivation.” – Grant Mooney

FINALIST in 2014, Lindenow will be out to improve on its semi-final exit this year.

Despite securing a top-two finish, the Cats were bundled out in straight sets and will be looking to atone for their disappointing end to last season.

Paul Carroll’s side has a number of new faces including Daniel Abbott and Nick McConville, and will also welcome back a selection of players who missed the back end of 2014 through injury. However, it will be without the likes of David Donchi and Peter Jenner, which will present a challenge.

The club is set to again roll out the welcome mat for former AFL star Brendan Fevola when it takes on Lucknow on the Queen’s Birthday long weekend and will also host former North Melbourne player Shannon Motlop in a match that is yet to be determined.

From the coach: “It was a late start for us recruiting wise, but I’m happy with where we’re at. We’ll be competitive, but whether we’re in the top few sides alongside Stratford, Wy Yung and Boisdale we’ll have to wait and see.” – Paul Carroll

PAYNESVILLE will aim to recapture the form which saw it secure the 2013 premiership after suffering from somewhat of a premiership hangover last year.

However, the Gulls will be forced to do it without last year’s league best-and-fairest Damien Ashcroft, who has signed with VFL side Frankston.

The club made a late charge for the finals last season, before exiting in the second week. The recruitment of Craig Taylor from Poowong and Paul Fleischer from Western Australia will help the team cover the loss of Ashcroft and Daniel Hayes, who has gone to Wy Yung.

Richard Hood is heading to Lindenow South, while Alfred Soloman has a clearance pending to the Sapphire Coast.

From the coach: “We think most of our improvement will come from our juniors coming through and from the guys returning from injuries. We weren’t far off the mark last year, but we needed a bit of an attitude adjustment and after tasting the disappointment of an early finals loss hopefully we can bounce back this season.” – Darren Martin

AFTER winning seven games in 2014, Lakes Entrance will look to continue its improvement and make a charge towards finals this season.

Ash Bennett is departing for Omeo District club Swifts Creek, while the club will also lose Mick Battista and Joel Waters who were travelling from Melbourne. Adam Walker will join Bairnsdale, but will stay aligned with the club.

The Seagulls have however picked up three players from the Tiwi Bombers in the Northern Territory Football League who have finished their commitments up north.

Former Sale player Luke Reggardo will join the Seagulls in 2015, as well as Xavier Ryan from Bairnsdale and Paynesville’s Adrian Gibbs. These handy additions will provide coach Anthony Woodland with plenty of talent at his disposal to work towards a finals berth.

From the coach: “We ended up playing 55 guys through seniors because of injuries and unavailability last year. We’ll try to keep as many guys out on the paddock as we can and hopefully come the back end of the season we’re travelling alright.” – Anthony Woodland

AFTER missing finals in 2014, Lucknow will hope for a significant improvement this year and has made a number of offseason additions.

Rhys Robinson will coach the senior side – taking over from Gary Jones – and has aimed to get his young team fit and their skills highly tuned in the lead up to the season.

Luke Belfrage, Tim Saunders, James Sanford and Billy Trinder join from Bairnsdale, while Pete Jenner comes across from Lindenow. The team will have its work cut out to compete with the competition’s better sides, however this season could be the launching pad for the young side to be more competitive over coming years.

From the coach: “Our ambition is basically to have a good pre-season. All we’ve been focusing on fitness for matches and injury prevention, improving our skills by hand and by foot and the defensive side of things. We’ve got a young list and have put a lot of time with the club into building the under 16s and 18s up in the hope they can come through in the coming years.” – Rhys Robinson

ORBOST-Snowy Rovers will hope its young team can show some improvement in 2015 after a disappointing year in 2014.

The young Blues side won just the one match last year to finish with the wooden spoon, but were competitive in patches against more fancied opponents.

Coach Dave Waddell will be among a core group of players who will be required to should much of the burden this season. The Blues have struggled in recruiting over the offseason and will rely on a number of youngsters to step up to the plate.

From the coach: “It’s always exciting, we’ve got a pretty young side with a lot of young blokes that’ll be coming through. We’ve got a really good core group and those blokes have really improved, so its exciting to see how they’ll go. We’ve definitely improved from last year so if a few things fall our way and we can have a few wins, that will make a big difference around the club.” – Dave Waddell