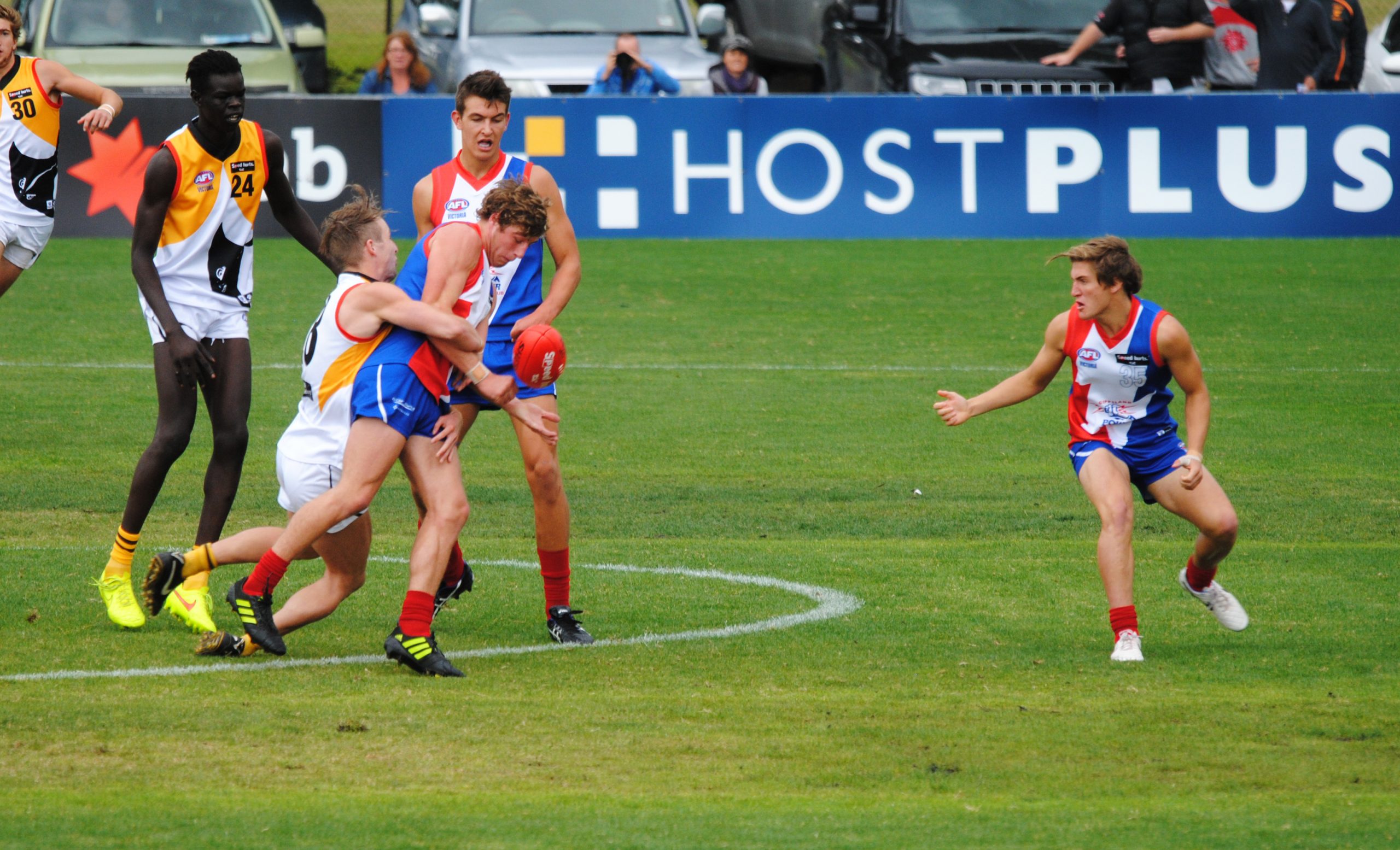 It was a very different team that represented the Power with 17 boys with TAC Cup experience and seven rookies making their debuts. The boys had been through an extensive pre-season involving a rigorous and physically challenging fitness program as well as the challenges of their Mt Hotham trip which really stretched their psychological capabilities.

Power began the year as it had finished the 2014 season, playing attacking, hard-nosed team-oriented football. From the opening bounce it put the Stingrays on the back foot and, in the process, shut down the running game that they are renowned for in this elite competition.

Both sides showed early in the first quarter they were prepared for a tight encounter and it was the Stingrays who scored first after exploiting a defensive indecision by the Power.

As if inspired, the Power hit back after some outstanding forward pressure from Josh Patullo allowed Harrison McKay to kick his first TAC Cup goal. After more tight play from both sides, the Power again upped the ante and this time, youngster Ben Ainsworth was able to finish it off with a booming kick.

The evenness of the two team’s determination was obvious when the Stingrays kicked a vital reply on the rebound but the Power again applied more intense pressure and, once again Ainsworth kicked a goal to give the Power a six-point lead by the first break.

People with a sound knowledge of football would have been well aware that, despite what the scoreboard indicated, the Power had been superior for much of the term in vital measures such as contested football and tackles. It is known as one of the competition’s best tackling teams and had more than 30 at the end of the term.

To illustrate this point, at the beginning of the second quarter, the Power used intense pressure to bring the ball from defence into attack and McKay was able to convert the resulting opportunity.

The Stingrays were really struggling to generate their normal running game and Nick Argento cleverly intercepted their attempt to get it going and kicked a fine goal. For about the next five minutes the Power wasted the chance to exploit their control of the contests but they got back on track when Nash Holmes won a well-deserved free kick and 50 metre penalty and extended the scoreboard pressure on the Stingrays.

Late in the quarter the Stingrays kicked their only goal for the term but the Power responded some more wonderful rebound football from defence with Ethan Park gratefully accepting the chance they created.

By the end of the term, the Power had extended its lead to 27 points but, more importantly, had really put intense pressure on the Stingrays when they tried to generate running play.

As part of this disciplined team football, the Power had recorded more than 60 tackles for the half and had the Stingrays struggling to cope with the pressure.

In the opening minutes of the third term some excellent ball use by Tate Marsh allowed Ainsworth to rove cleverly off the pack and kick his third goal. First gamer Matt DeBruin combined with Tom Papley and Patullo to allow key forward McKay to also kick his third for the game.

To their credit, the Stingrays kicked a vital reply to stay in the game but more precise ball use by the Power resulted in McKay slotting through another major.

With more than a six-goal lead, the Power was again reminded it needed to stay focussed as the Stingrays goaled mid-way through the term. Once again it inspired the Power to be more proactive and some excellent pressure by Holmes allowed Connor Ambler to snap a goal to give the Power a 36point lead by the end of the quarter.

One of the most pleasing aspects of their ability to apply such intense pressure in contests was the fact that much of this hard work was done in attack which made it almost impossible for the Stingrays to generate effective attacking play themselves.

Despite dominating contests early in the final term, the Power wasted relatively easy scoring opportunities until some poise and skill from Brad Olsson allowed Ainsworth to open the goal scoring for quarter.

More effective ball use by Patullo and Tom Hobbs allowed Ainsworth to kick his fifth for the game from outside the 50m line.

The Power’s fitness and willingness to play disciplined football had shut down what remained of the Stingray’s ability to respond on the scoreboard. More poise under pressure by the Power allowed Deven Costigan to score his first Power goal just before the final siren and it gave the side a 55-point winning margin.

In a match which coach Leigh Brown wanted the Power to play intense, team-oriented and effective football, on-field leadership from his experienced players was vital, on-baller Tate Marsh responded magnificently to his challenge.

Marsh used his pace, skills and ability to read the play to win many important possessions but, far more importantly, used the ball with great poise to ensure that others were able to make the most of their opportunities.

In his debut, top-ager Deven Costigan quickly adjusted to this level with a combination of hard-nosed football in tight contests and the ability to use pace, superb ball skills and agility to win the ball in open spaces and rarely waste his almost 30 possessions.

Power “veteran” Nash Holmes took up where he left off at the end of 2014. He was at the top of all competitive statistics for the TAC Cup and once again led the way with more than 15 tackles and a multitude of possessions in the thick of the toughest action all day.

Gippsland Power will have an ideal opportunity to extend to its impressive start to the season against the Murray Bushrangers at Morwell on Good Friday.