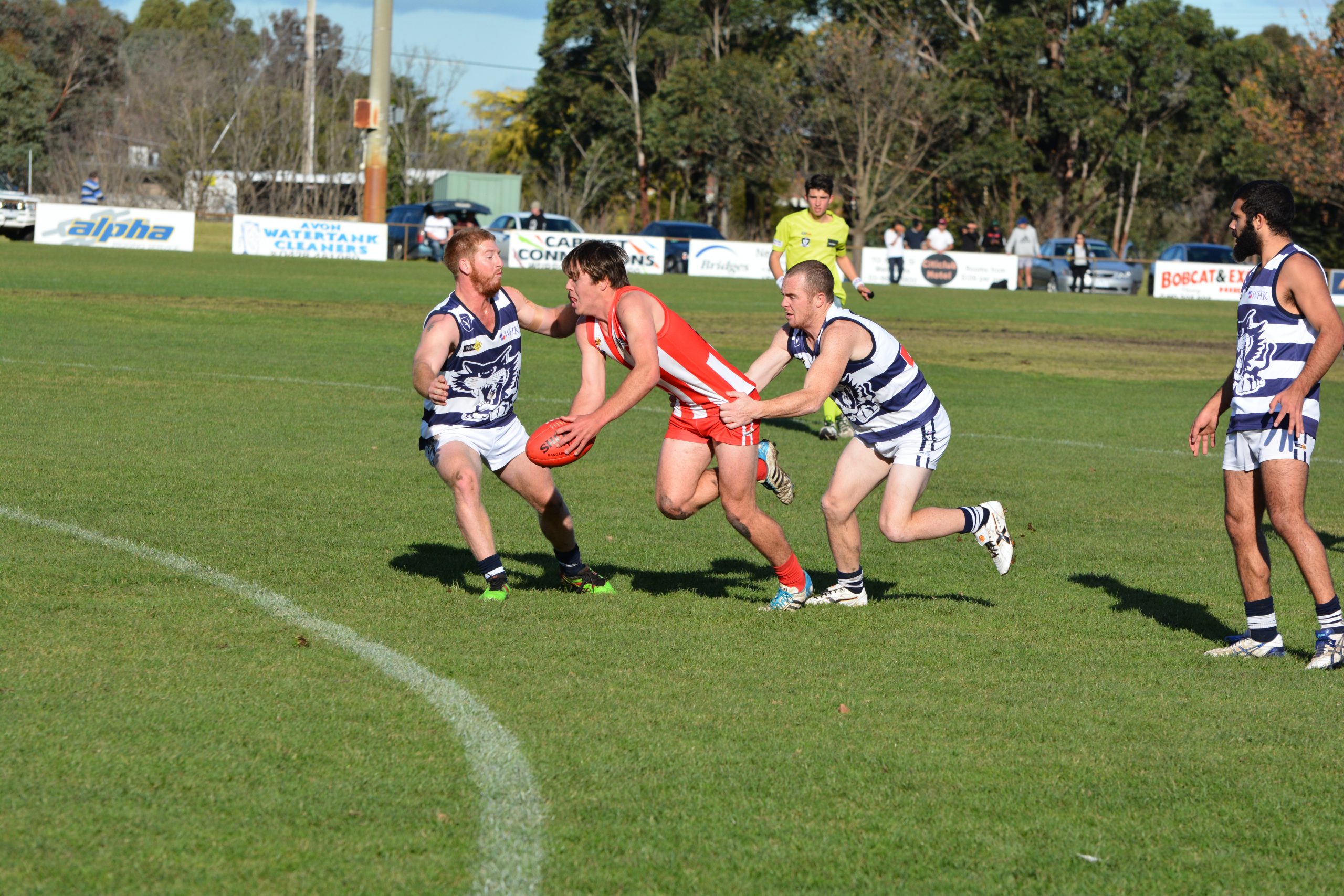 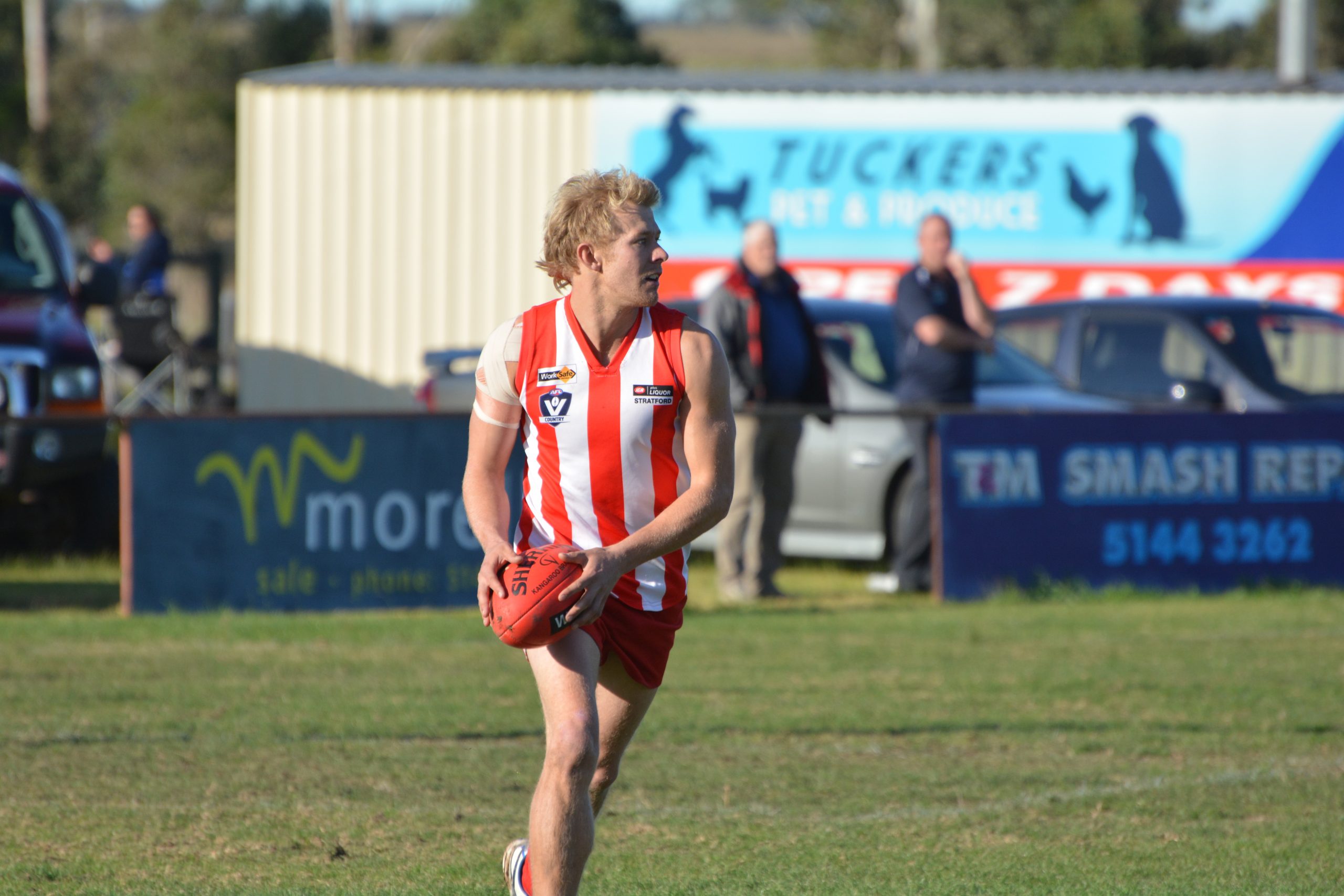 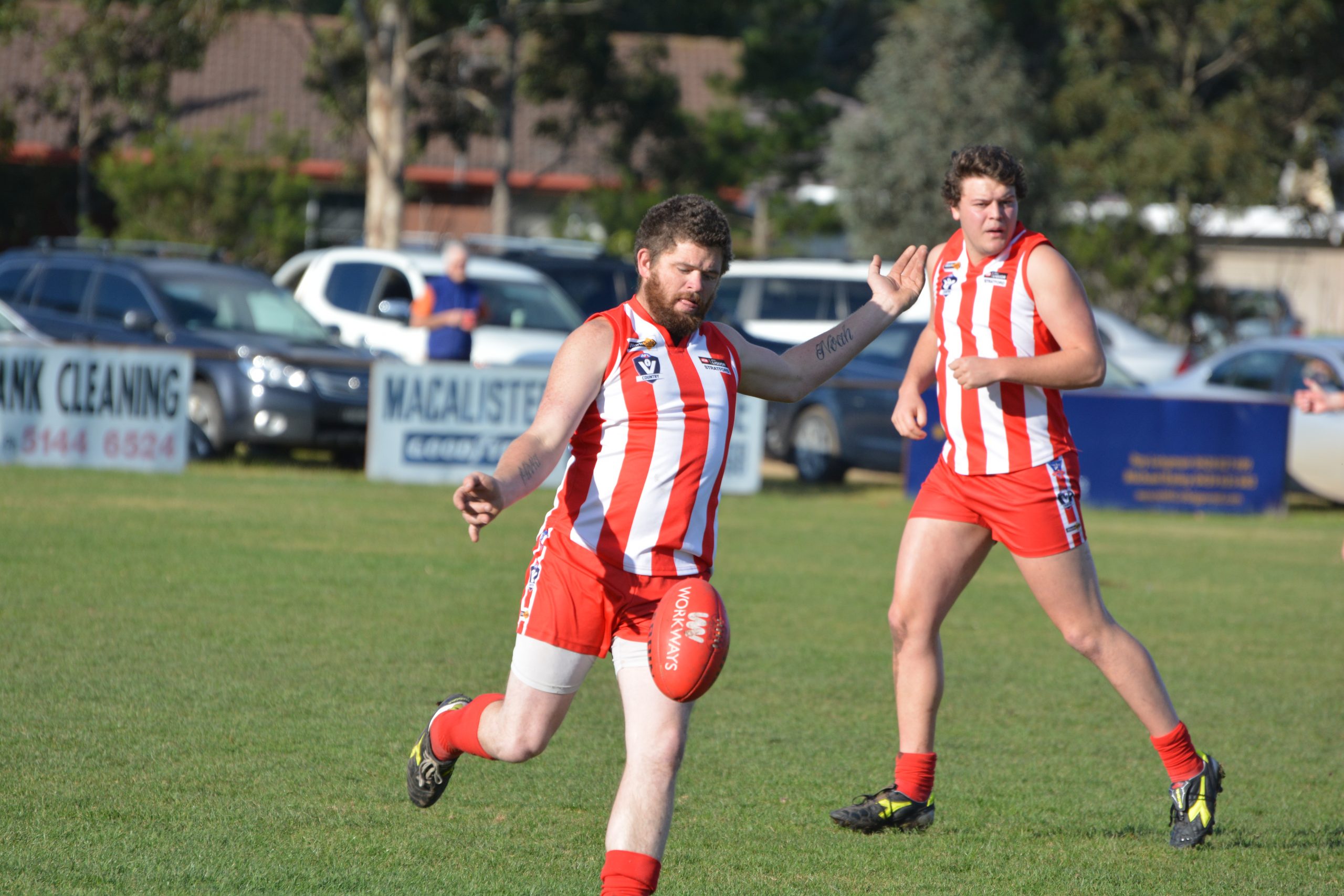 LINDENOW has moved into outright third on the East Gippsland football ladder following a two-point win over Stratford.

After trailing at the first two changes, the Cats made the most of having an extra man to begin the second half to take the lead heading into three-quarter-time. The Cats managed to hold on in the final quarter to record an upset victory, 15.9 (99) to 15.7 (97).

The result was a dramatic turnaround from when the sides met in round two, with the Swans dominating that clash all day to win by more than 12 goals. Fast-forward nine weeks and the result had been reversed.

The Cats were aided by the inclusion of a number of Bairnsdale listed players such as David Donchi, Bayden Ashwood and Cameron McPhan, all of whom were major contributors throughout the match.

Ashwood and Nicholas McConville led the way around goal for Lindenow, kicking seven majors between them. The pair was among a spread of nine goal scorers for the Cats, something that would have no doubt pleased coach Paul Carroll.

The loss was just Stratford’s second of the year, however it was enough to move it off top spot on the ladder.

A trend may be developing this season, with both the Swans’ losses coming against teams who had included a number of Bairnsdale players in their ranks that weekend. The Swans will need to be wary next time Bairnsdale has a bye in the Gippsland League, which just happens to be on August 8, when they are due to travel to Lindenow.

Given a yellow card following a scuffle in the shadows of half-time, Jack Bacon sat out the start of the third term and was held goal-less for the first time this year. Rodney O’Keefe and Patrick Gordon both helped to fill the void with three goals a piece.

Stratford also had nine goal scorers for the day and was impressively accurate around goal.

The result goes to show the Swans are far from invincible, however they will be eager to reinforce their position as the league leader when they travel to Wy Yung this Saturday, with the winner set to take first place on the ladder.

PAYNESVILLE’s 13-goal to two second half helped it run out a handsome 66-point winner over Boisdale-Briagolong.

Whatever Darren Martin’s message was at half-time, it worked. Paynesville turned a four-point deficit at the long break into a 32-point lead by the final change on the back of six unanswered goals.

The Gulls had 10 goal scorers for the game and were led by Simon Biszko with four majors, while Ryan Holland was named their best.

Its fourth win of the year was an important one for Paynesville, making the Gulls level on premiership points with Boisdale-Briagolong, but moving them into fourth spot because of their superior percentage.

WY Yung moved to top spot on the ladder with a 53-point win over Orbost-Snowy Rovers.

What was expected to be an easy victory for the Tigers turned out to be anything but. A fired up Orbost took it up to its highly fancied opponents in the first quarter and held a one-point lead at the first change.

Despite their spirited effort, the Blues couldn’t stick with one of the premiership favourites, who proving too strong as they ran out 18.8 (116) to 9.9 (63) winners.

Will Hamilton and Thomas Smith both booted four goals, while Reagan Kyle was named as the Tigers’ best.

For the Blues, their first quarter performance was a clear sign of the improvement that has been made under coach Dave Waddell this season. Despite not being able to stay with their opponents throughout the match, they remained competitive and appear close to getting that illusive first win of 2015.

WITH its season on the line, Lakes Entrance trailed at all three breaks but was ahead by the barest of margins when the final siren sounded, scoring a massive one-point win over Lucknow.

Inaccuracy around goal in the first half came back to haunt the Magpies, who had nine more scoring shots for the match than their opponents.

Mark Cooper and Shaun Ryan kicked three goals each in the loss, while Nathan Fall was named the Magpies’ best.

After sitting in third position on the ladder just three weeks ago, the loss has dropped Lucknow below Lakes Entrance and into seventh position.

With the third best percentage in the league, the Magpies remain just a game outside the top four, however they will need to quickly stop their form slump if they are to be a contender come finals.