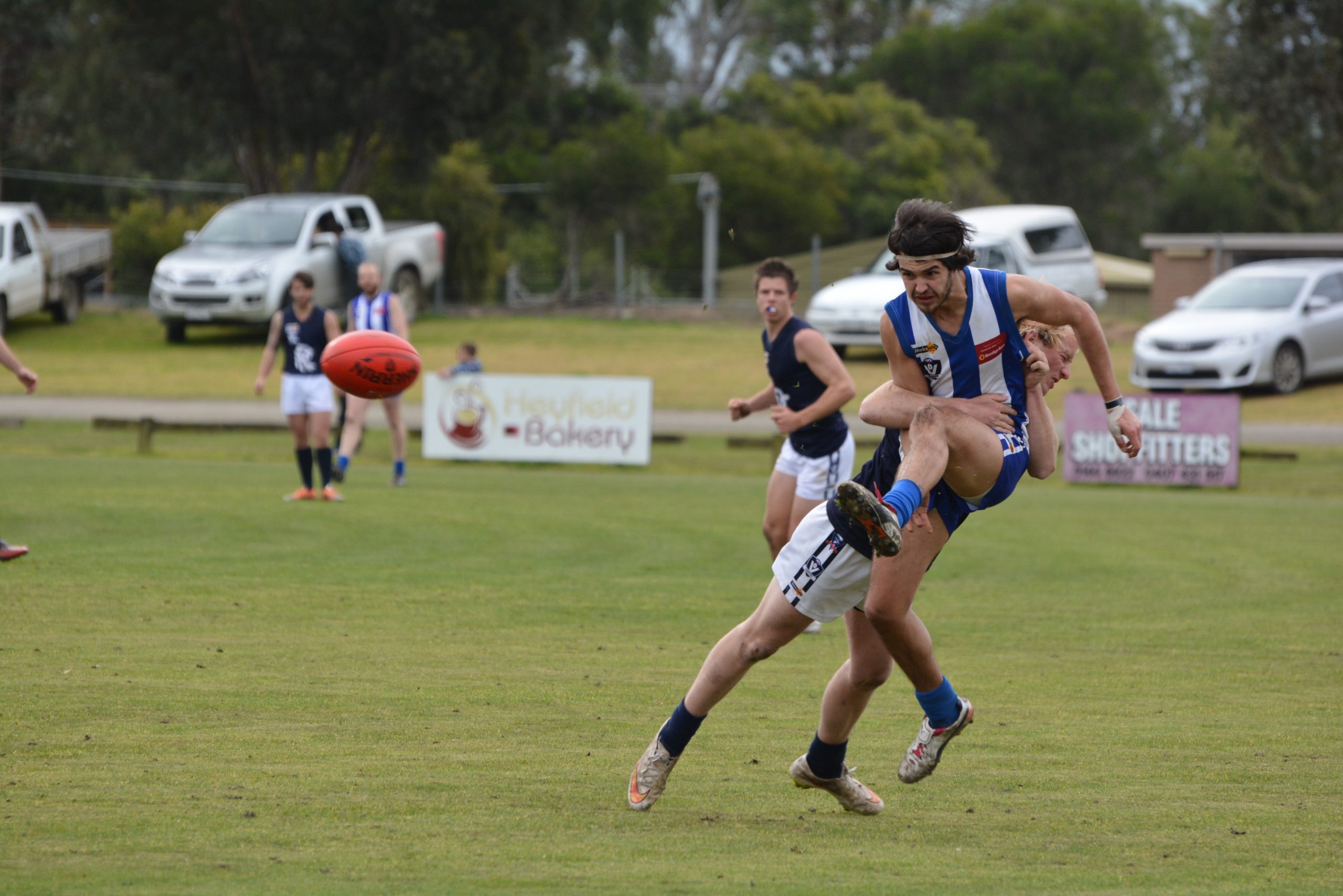 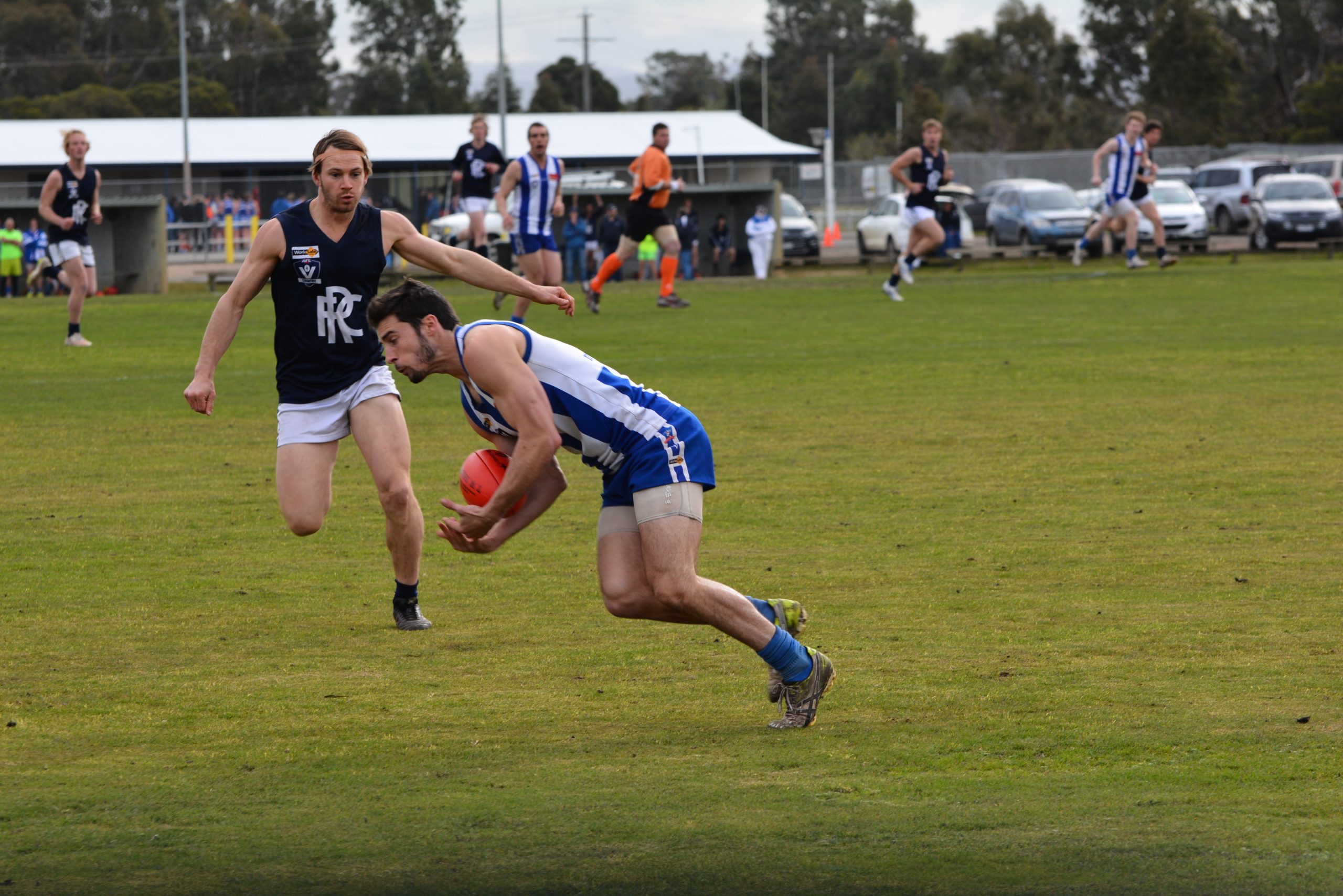 NORTH Gippsland football ladder leader Rosedale got the better of Heyfield in a low scoring affair.

Meeting a fellow finals contender for the third week running, the contest at Heyfield would test the resolve of the Kangaroos, who demonstrated early they wouldn’t roll over.

With hopes of a free flowing offensive affair, spectators found themselves enthralled by a contest which rebounded back and forth.

Nathan Flint broke through to register the first major of the contest for Rosedale. Flint played on after Dale Fleming’s strong tackle dispossessed a Heyfield defender.

It would be followed by a goal from Brandon McDonald as the Blues began to take the ascendency.

Jesse Jackway put the Kangaroos on the board ahead of quarter time, with the Blues leading by seven points.

A major from James Beha drew Heyfield closer, followed by consecutive behinds as the Kangaroos’ forwards worked hard to create an opportunity.

Rosedale coach Ben Macreadie broke through to register his first goal before Josh Stubbe responded to make it a four-point game.

The Blues kicked things off in the second half with the first major in blustery conditions, before scoring dried up during a physical third term.

Both sides battled hard during the ferocious quarter which left Heyfield two goals down at the final change.

With the contest in the balance, McDonald drew the margin out to three goals, one of the largest of the match, followed by a major to Jack Tatterson, which appeared to kill the contest.

But the Kangaroos kept coming. A missed shot for goal by Jesse Bedggood was followed by the side’s first major in more than 40 minutes, Wayne Knight breaking the drought to reel the margin back to 16 points.

There was plenty of play in the Kangaroos’ forward 50, however they couldn’t capitalise.

Late majors to McDonald and Brad Caldwell, after the siren, ensured the win for the Blues.

Rosedale’s Rohan Diamond swooped on the loose ball time and time again, as he swept across half-back. Luke Stuckey tallied possessions in an impressive performance, with Adam Diamond and James Hammill proving a handful in the engine room.

For Heyfield, Nick Dinsdale toiled hard throughout the contest, Andrew Lambie was dogged in defence, while Josh Stubbe ran hard all day, looking to hold Blues playmakers Fleming and Macreadie at bay.

Eight unanswered goals in the opening term wasn’t the start that the Wildcats wanted at Stephenson Park, with the Bulldogs going on to record a resounding 181-point victory.

Hitting the score board in the second term through Corey Kee, it would be the Wildcats’ only major for the game.

There was no respite in the second half for the Wildcats, whose back line continued to be under siege as City kicked 12.22 to 0.1.

David Piasente won clearance after clearance, having been the recipient of Harry Kaadndorp’s ruck taps. Abe Schuback and Milham were solid contributors as they demonstrated flair around the contests with Mitch Evans lively.

CHURCHILL returned to the top five with a hard-fought victory against Gormandale.

The Cougars skipped away early before finding themselves with a contest on their hands.

Held goal-less in a lack lustre opening term, the Tigers booted 6.7 to 2.4 in the second term to put themselves back in contention.

Reeling the margin back to eight points, the Tigers registered the first goal of the third term with defender turned forward Jordon Sandy slotting through one of his two for the contest.

Tim Finch was the recipient of a double 50 metre penalty which put the Tiger midfielder in point blank range of scoring following the indiscretion by Churchill ruckman Dillon Leys.

In what became a defining moment of the contest the Cougars bit back to take a 15-point lead into the final term.

Sam Marks slotted through the first goal for the visiting Tigers in the final stanza before Brendon Holt added his third as the momentum swung the way of the premiers. A final major scored as the clock counted down on an enthralling contest, giving the Cougars a 12.17 (89) to 9.12 (66) victory.

Little separated the sides on the scoreboard in the opening term before the Demons got the better of their win-less opponent, kicking seven goals to one during the second stanza.

Ryan Underwood (four goals), Jake Liversidge and Corbin Sutherland (three each) were the main protagonists in front of goal for the Demons.

Leading by 53 points at the long change, the Demons had their chances in the third term, but had to settle for two majors from eight scoring shots before coming home with a wet sail in the fourth.

Trek Davis stood-out for the Demons, Grif Underwood continued to demonstrate why he is one of the elite midfielders of the competition, while Jake Anderson and Louis Rodaughan where also among the visitors’ best.

Chris Wangman was the Magpies’ best.

TRARALGON-Tyers United was forced to work hard for the points against Cowwarr.

Little separated the sides throughout the contest, four points the margin in favour of the Saints at the first change before the Bombers wrestled the ascendency to lead by five points at half-time.

During the third term, the Saints booted four goals to three, however a string of behinds had the visiting Bombers within two points at the final change.

In third place a game clear of their nearest rivals, the Bombers found another gear as the Saints struggled to match their run and drive in the dying stages. TTU slammed home four goals to one to register a hard fought 14-point victory, 11.10 (76) to 9.8 (62).

The Saints were well-served by Ben Coffey and Luke Heiser, with Todd Mann booting three goals.