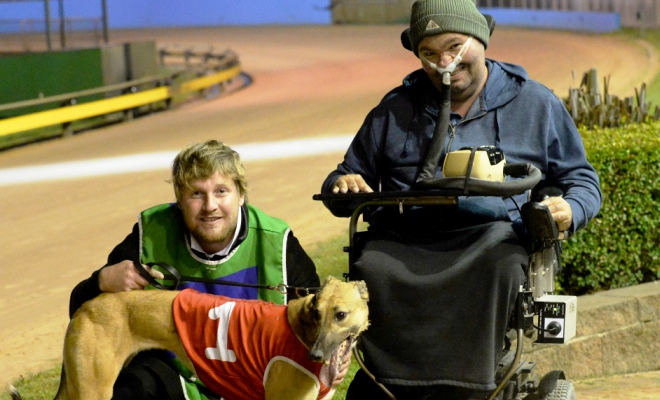 At Sandown Park, Sandy Monelli began well from box one and generated a two-length break down the back straight. Louie Neveelk, trained at Denison by Rosemary Kleeven, threatened late, but was unsuccessful as Sandy Monelli held on to win by a length in 29.7 seconds.

“We thought she’s in the best form she’s been in so why not have a crack.

“Ever since Christmas she’s been in great form — we haven’t changed anything she’s just found improvement within herself.”

Prout’s family has been involved in greyhounds for many years, but it’s a hobby which he had only recently taken up.

“(Sandy Monelli) is the first dog I’ve ever trained myself — dad and his uncle have been involved over the years,” Prout said.

“Due to taking me everywhere to play sport dad wasn’t able to spend as much time with the dogs while I was growing up. Once I gave up my sporting commitments and started working I was able to buy some dogs.”

Owner of Sandy Monelli, Alan Wright of Sale, is wheelchair stricken as he suffers from muscular dystrophy. He purchased the greyhound for a relatively small sum — a bargain buy as Sandy Monelli has now won $33,110.

“After her first few runs at Ballarat he bought her for $3000 — that’s proving to be a very good buy.”

Prout is uncertain of Sandy Monelli’s next assignment though does have his eyes on a series at his home track.

“I’m not too sure where we’ll take her next, there was a series at Sale we had our eyes on but I’ll have to speak with the team,” he said.