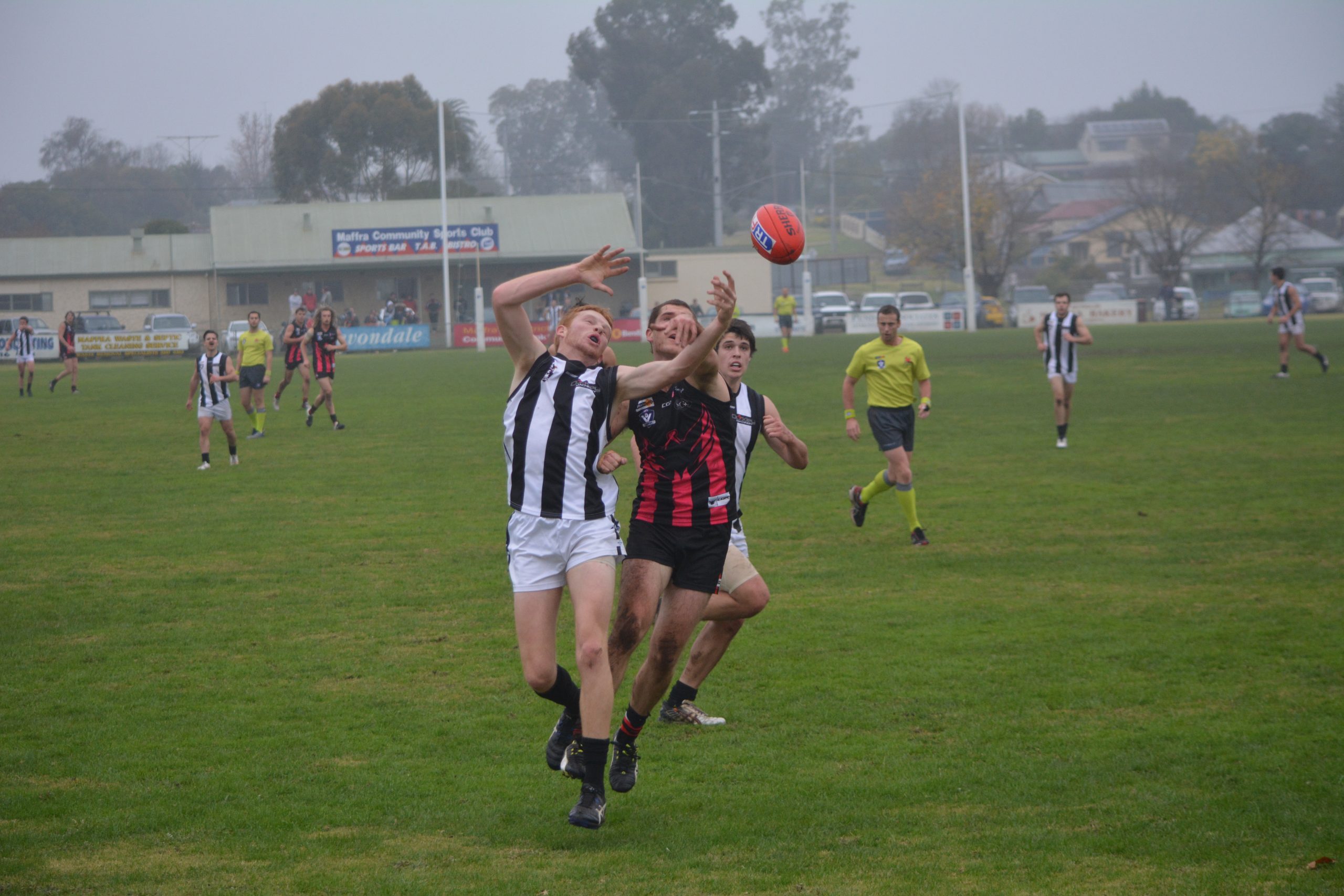 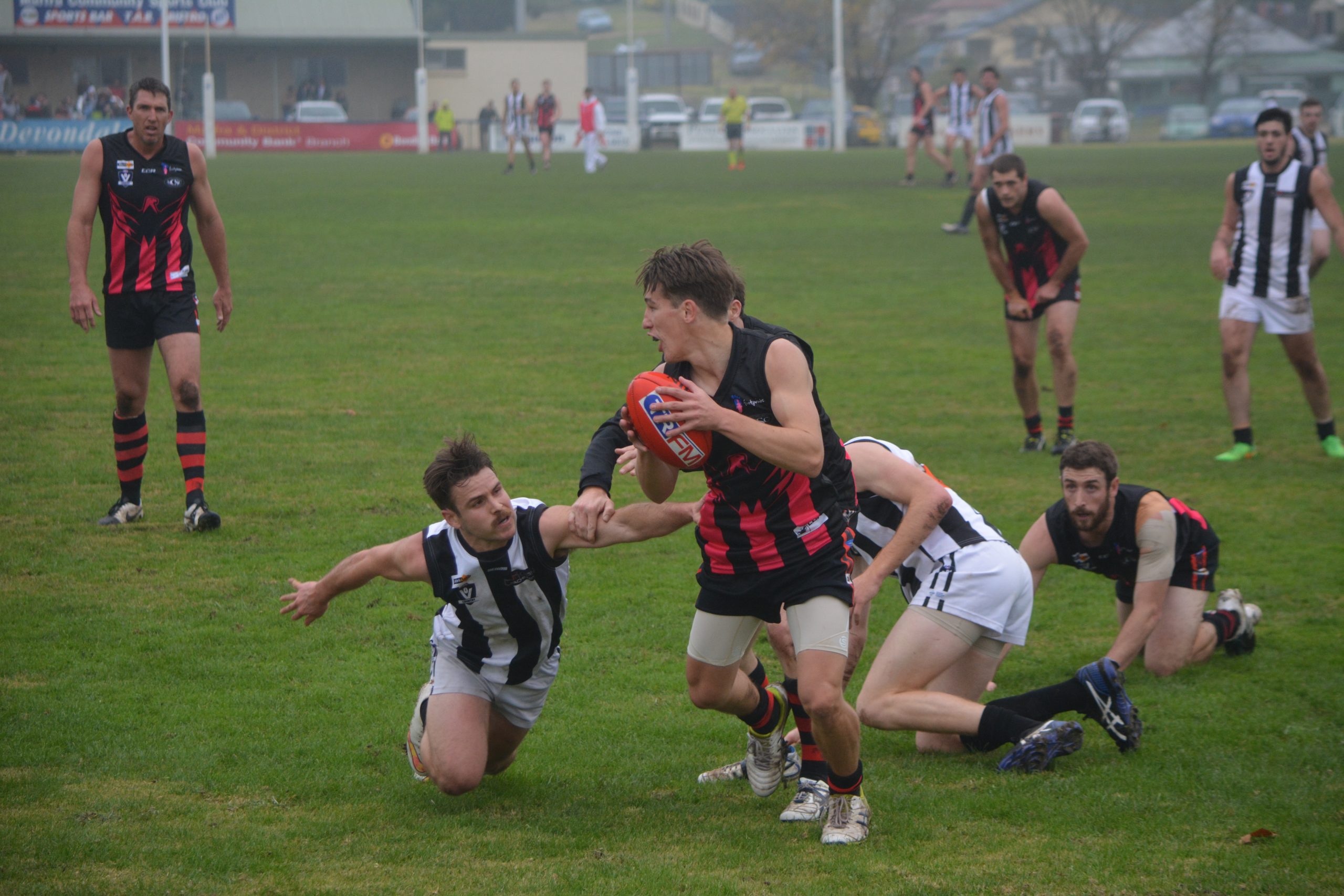 MAFFRA snatched victory from Sale in the dying moments in Sunday’s Battle of the Birds.

It was the Eagles’ second one-point win over the Magpies since they began competing against each other in the Gippsland League in 1960. In that time, Sale won once at Sale Oval by a point in 2010.

However, there was some confusion after the final siren, when the umpires called the match a draw, but a second check confirmed the Eagles escape act.

The Eagles wore one-off jumpers, replacing the red with pink, to support the Footprints Foundation, which supports local families dealing with breast cancer.

The match played out contrary to what the ladder position of teams Maffra second, Sale bottom would have suggested.

Played in gloomy conditions and in persistent drizzling rain, this was a typical tough Sale-Maffra contest, with the biggest margin 20 points, held by the Magpies midway through the third quarter.

At that point, the desperate Magpies seemed to have the game in their keeping. However, the Eagles rallied in the final quarter to kick 3.4 to 2.1, just enough to get them over the line.

Earlier, Danny Butcher had been busy for Maffra, which held a seven-point lead at quarter-time. The Eagles surrendered the lead in the second quarter when Sale’s big forwards John Gooch and Lachlan Heywood marked strongly and kicked three goals to give the Magpies a seven-point lead at half-time.

Sale added two more goals to Maffra’s one in the third quarter, and with another two early goals in the final term, looked capable of pulling off an upset win.

Maffra’s Sam Walker, together with Daniel Bedggood, who had been quiet, Andrew Petrou, and Michael Coleman, all became prominent in the final 10 minutes of the match as the home side whittled away the Magpie’s lead.

A goal to Petrou at the 30-minute mark gave the Eagles the one-point victory.

Lipman was clearly the best big man on the ground, his ruckwork and marking around the ground was outstanding. The Magpies were also well-served by Jordan Dessent, who dominated the midfield, and 246-game veteran Chris Laverty produced a sterling effort all over the ground for four quarters.

The Magpies’ fierce tackling and desperation to win the ball had held them in good stead all day, however the disappointed young team learned the hard way that it takes a four-quarter effort to win tight games. It was a case of so near yet so far, yet by comparison to previous weeks, the performance of the Magpies on Sunday was creditable.

After Sunday’s energy sapping contest both teams will enjoy a weekend off for the second half of the split round.

ON Saturday, Warragul kicked away from Moe to record a 32-point win at Ted Summerton Reserve.

Brad Scalzo dominated on the ball, while Matt Rennie booted four goals for the Gulls, which moved into fourth position on the ladder.

DROUIN recorded its third win of the season with a convincing 55-point victory at home against Bairnsdale.

The Hawks booted nine goals to one in the second half.

THE split round will conclude next weekend with Leongatha hosting Traralgon on Saturday, and Morwell welcoming Wonthaggi on Sunday.