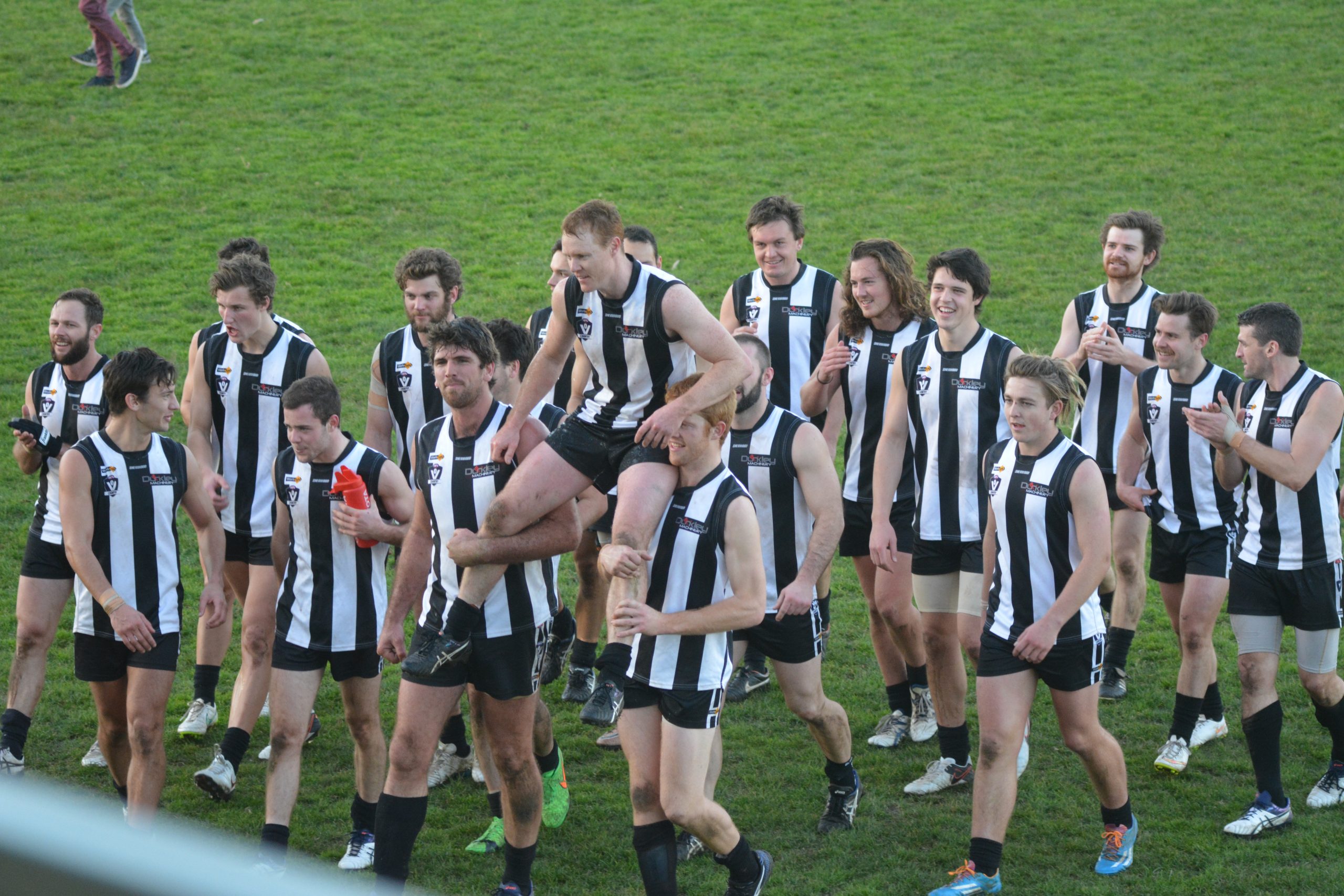 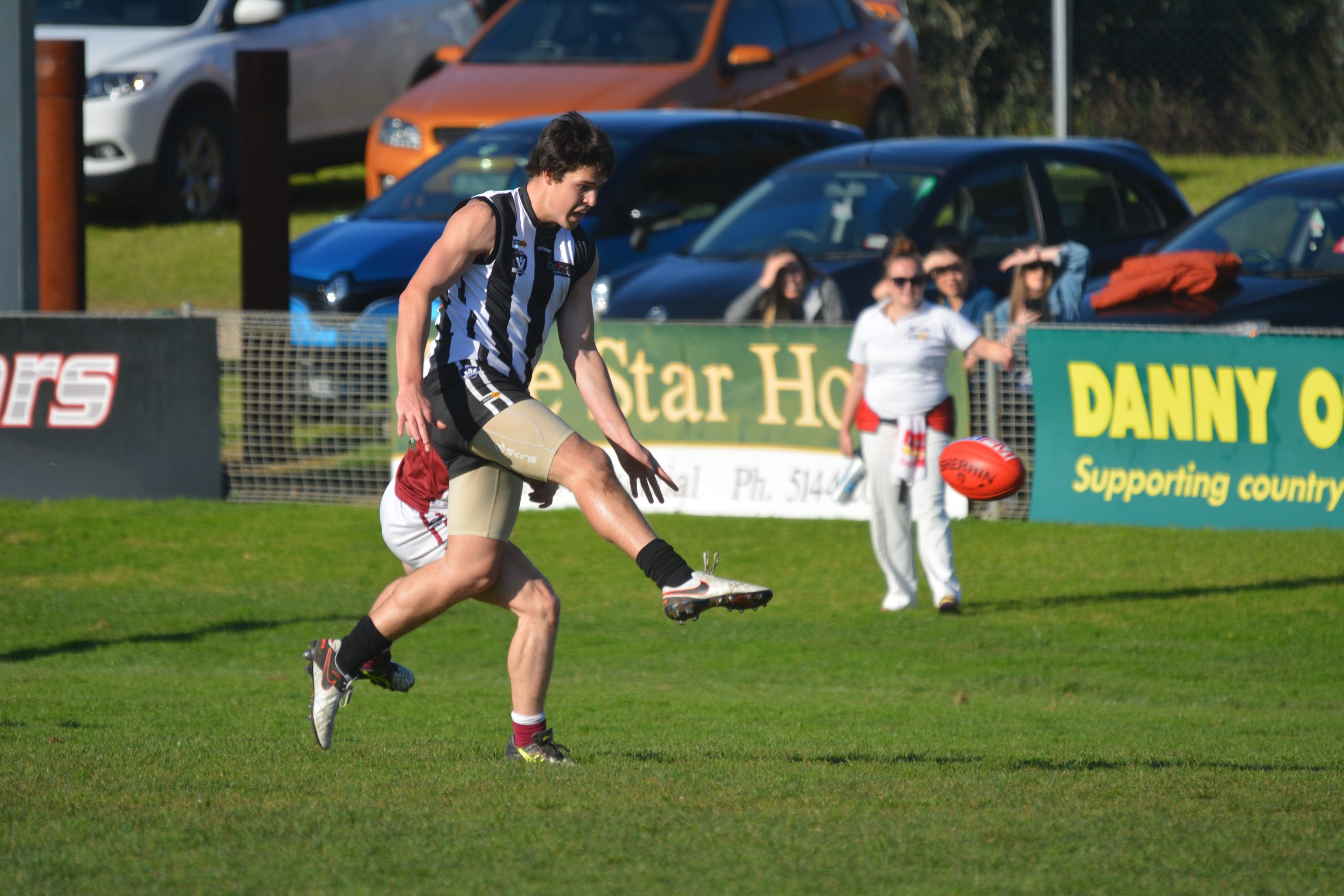 SATURDAY was a day of upsets in Gippsland League football, with Sale, Drouin and Morwell defeating their higher-ranked opponents.

The Maroons led by five points following a high-scoring first term before the Magpies booted eight goals to four in the second quarter to set-up the victory.

Magpies coach Shane Fyfe was delighted with the win, saying every player contributed against the reigning premiers.

Before the match, Fyfe mentioned the outstanding service of Chris Laverty, who was playing his 250th senior game for the club. After the upset victory, Laverty was carried off by his excited teammates.

During the match, Laverty did what he had always done, intercepting balls kicked into defence before finding teammates will accurate passes.

It was a high standard, free-flowing match, with both teams getting value for shots for goals.

Match winner Brad Dessent led the charge for Sale, kicking eight goals from strong marks and accurate kicking. Dessent has had a purple patch, after kicking eight goals against Morwell, he went back to Gippsland Power and booted three, before his haul of eight this past weekend.

Dessent’s effort came within two goals of a long standing Sale club record in matches against the Maroons. Sale’s best against Traralgon is 10, scored by Doug Orr in the old Gippsland Football League in 1931.

Sale won most of the centre clearances through the strong ruck work of Jack Lipman.

Lipman, who palms the ball with either hand, keeps hitting teammates, reminiscent of Magpies legend Bob Mason. Like Mason, Lipman pulls down strong contested pack marks then quickly feeds off to the running players like Kane Martin, Michael Todd, Justin Mitrevski and Jackson Glenane, who took advantage of the ruck dominance.

Jarrod Freeman also had plenty of the ball. Freeman has a good football brain, and has been a welcome return to the Magpies.

The defence was solid with Jordan Dessent, Joel Wallace, Laverty and Fyfe leading the way. Fyfe made good use of long and short options, with some of his long kicks to unguarded teammates on the Guthridge Parade wing launching scoring moves.

During the final quarter when the Maroons were pressing, Glenane was rewarded for a good tackle, and Fyfe, who drifted in the open forward area, kicked steadying goals to seal the Magpies’ win.

A SEVEN-goal to one final term gave Drouin an upset 25-point win over Maffra.

The Eagles’ return to action following the abandoned Leongatha game was disappointing. Leading by 14 points after three tight quarters, the Eagles were unable to keep up with the Hawks in the final term, going down 17.10 (112) to 13.9 (87).

The win moved the sixth-placed Hawks just two points outside the top five.

Onballers Luke Duffy and Steven Ballingall, and coach and ruckman Bob McCallum, back in the side after playing for Victoria Country, were major contributors for Drouin.

Five goals from Andrew Petrou, and good work by Kel Porter in the midfield, put the Eagles in a winning position.

BOTTOM side Morwell caused the round’s other upset, defeating top five side Warragul by 13 points at home.

Five unanswered goals in the second term proved to be the difference in the Tigers’ 9.15 (69) to 8.8 (56) victory. Tim Ryan and coach Joel Soutar led the way for Morwell.

LEONGATHA had a record-breaking victory over Bairnsdale.

Chris Dunne’s 10 goals was the most by a Leongatha player against Bairnsdale, beating the previous record of nine goals, shared by three players.

WONTHAGGI surged late to steal a two-point victory at Moe.

Joel Liddle led the charge through the midfield, Adam Cook was prominent in attack, while Shannon Bray marshalled the troops superbly down back.

Patrick Ryan kicked four goals for the Power, while Mark Engley booted five for the Lions.