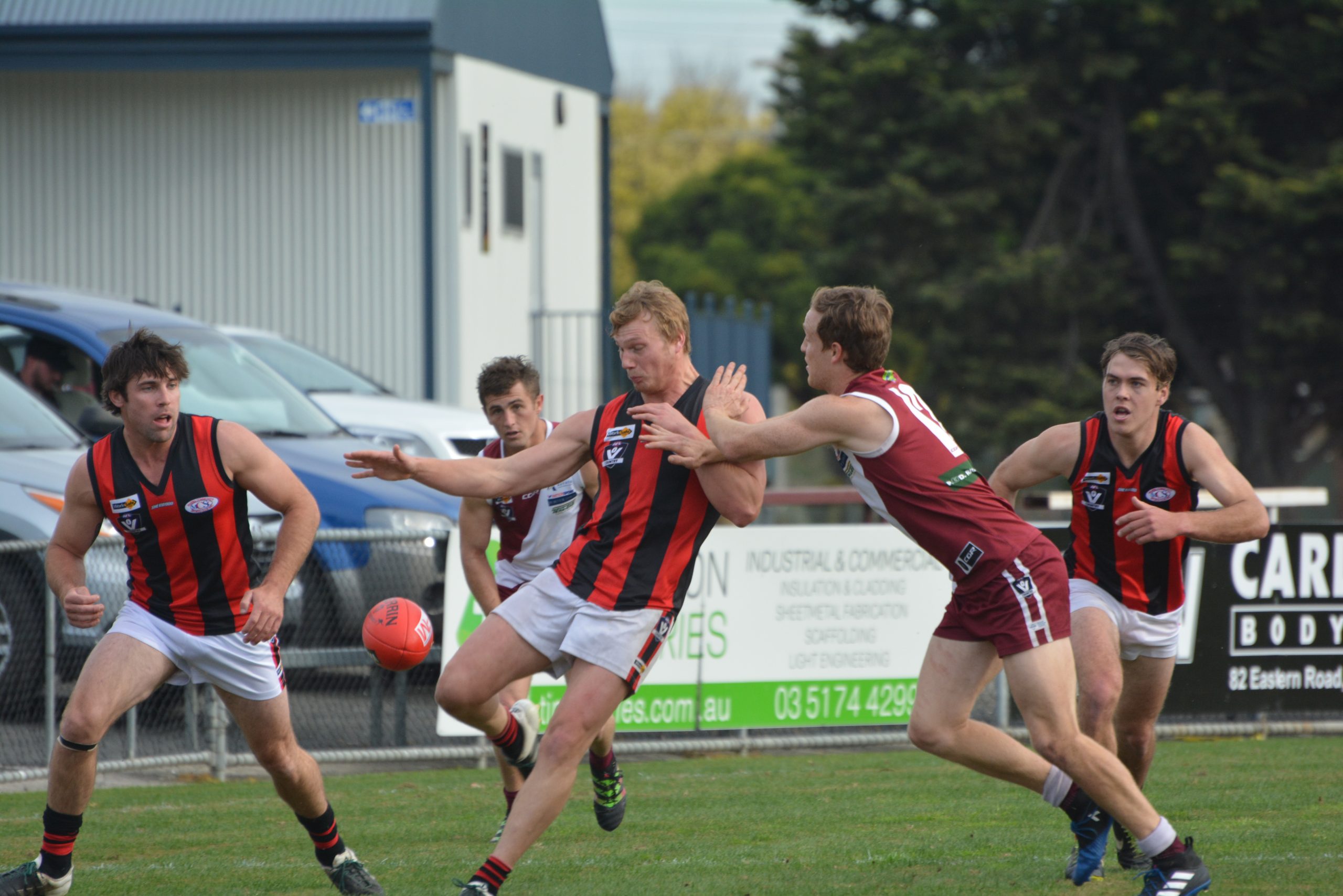 TWO of Gippsland League football’s greatest modern rivals will clash in the qualifying final for the third successive season.

After missing out on the minor premiership last weekend, Maffra will take on Traralgon on Saturday at Sale Oval for the right to meet Leongatha in the second semi-final.

The match will be the 200th meeting between the clubs, dating back to 1914 in the original Gippsland Football League.

Of the previous 199 matches, the Maroons have won 118 and the Eagles 81. In finals, Maffra has won 11 and Traralgon seven.

In their two meetings this season, the home team emerged victorious.

At Traralgon in round six, the Maroons led by seven goals at three-quarter-time, only for the Eagles to storm home in the final term. Maffra’s comeback, kicking 5.6 to two behinds, fell eight points short.

In the round 15 return clash, the Eagles kept the Maroons to just three goals for three quarters on their way to a 59-point victory.

Traralgon has been inconsistent heading into the finals, losing three of their past six matches. Last weekend, they defeated Warragul by 72 points.

Saturday’s match promises to be a tight tussle, with the Eagles boasting the league’s second best offence and third best defence, while the Maroons are ranking third in total points scored and second in least points conceded.

The Eagles have two of the league’s top five goal scorers, with Mitch Bennett booting 48 and Darren Sheen 41, while Daniel Bedggood has kicked 36.

Lee Stockdale has also kicked 41 goals for Traralgon, while Jordan Sandy is also a forward the Maffra defence will need to be wary of.

The midfield battle will also be intense, with Maffra’s Kel Porter, Danny Butcher and Alex Carr taking on the likes of Mark Collison and Rohan Hildebrand for the Maroons.

Traralgon will feature in all four football matches on Saturday.

In the reserves, Leongatha will face Traralgon, with the winner to play Maffra the following weekend.

The Maroons will play Moe and Bairnsdale in the under 18s and 16s respectively.

MOE and Morwell will meet for the second consecutive week on Sunday, when the local rivals meet in the elimination final at Traralgon.

The winner will advance to the first semi-final, while it will be “season over” for the defeated.

It will be first time since 2001, and just the eighth time in league history, that teams have met in the first week of finals have playing each in the last round.

The Lions have won their past four matches against the Tigers, including last weekend’s 37-point victory at Moe.

The Tigers will be bolstered by the return of ruckman Isaac Abas and key defender Jack Brown.

This game will be Moe’s first taste of finals since 2009, while Morwell claimed the 2014 premiership in its previous finals match.

Moe and Morwell will also contest the reserves elimination final.

Maffra will play in the junior matches.

In the under 18s, the Eagles will meet Bairnsdale. The Redlegs claimed fourth spot on the ladder with a slightly better percentage.

The Eagles will play Leongatha in the under 16s. Like the under 18s, the sides are only separated by percentage on the ladder.

A draw in the final round against the Parrots last weekend was enough for the Eagles to push their way into the finals.