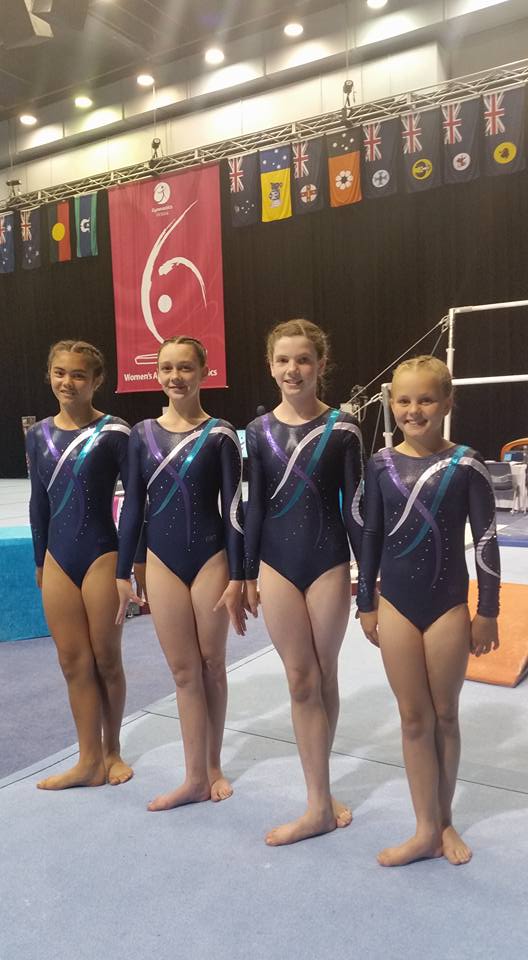 Both groups heading home with a haul of impressive results.

For the level five and six artistic gymnasts, this was their final competition for 2017.

The level six girls, having previously competed at the Arena for the state finals, knew what to expect from the venue, the equipment and the atmosphere. For the level five girls, it was their first taste of championship gymnastics, and they didn’t fail to disappoint.

Vault was once again Maffra’s apparatus of choice, with Tess O’Toole taking silver in the level six under 14 division, Camille Japhary bronze in the level five 12 years division, and Rebecca Harrington and Shayla McNamara placing fifth in the level under 12 and over 14 age groups respectively.

The level five team of Makayla McCoy, Camille Japhary, Shayla McNamara and Rebecca Harrington placed 12th from 32 teams, an impressive effort for the girls who train 10 hours each week.

The level six team, competing in its third competition in eight days, finished an impressive fourth in Victoria. The girls competed several tumbling upgrades and new skills for the first time at the competition and were rewarded with a number of personal best scores for the meet.

Katelyn Henderson was awarded the level six choreography and artistry award in recognition of her creative and unique floor routine.

Both Maffra teams were complimented by the judging panels for their sportsmanship and efforts at the limited hour’s state final competition.

At the Omega Trampoline Club, Maffra continued its success as five athletes competed in both double mini tramp and trampoline competitions, some vying for state time qualifying scores.

The run on gold didn’t stop there, with Aaron Benc winning the national men’s under 17 double mini tramp event.

Tom Finlay was back in action, competing for the first time since his finals appearance at the national gymnastics championships in June. He finished an impressive third in the international men’s under 19 double mini tramp.

Maffra Gymnastic Club will host the Gippsland Sports Academy gymnastics programs on Sunday as both the junior and senior athletes train with the top athletes and coaches from around the region.

The tumbling team will compete in the final event of the year in Bendigo on December 3.

Coaches and athletes will then take a short break for the festive season before hosting more than 60 athletes and coaches from around the state at their week-long annual women’s artistic Summer Clinic in January.