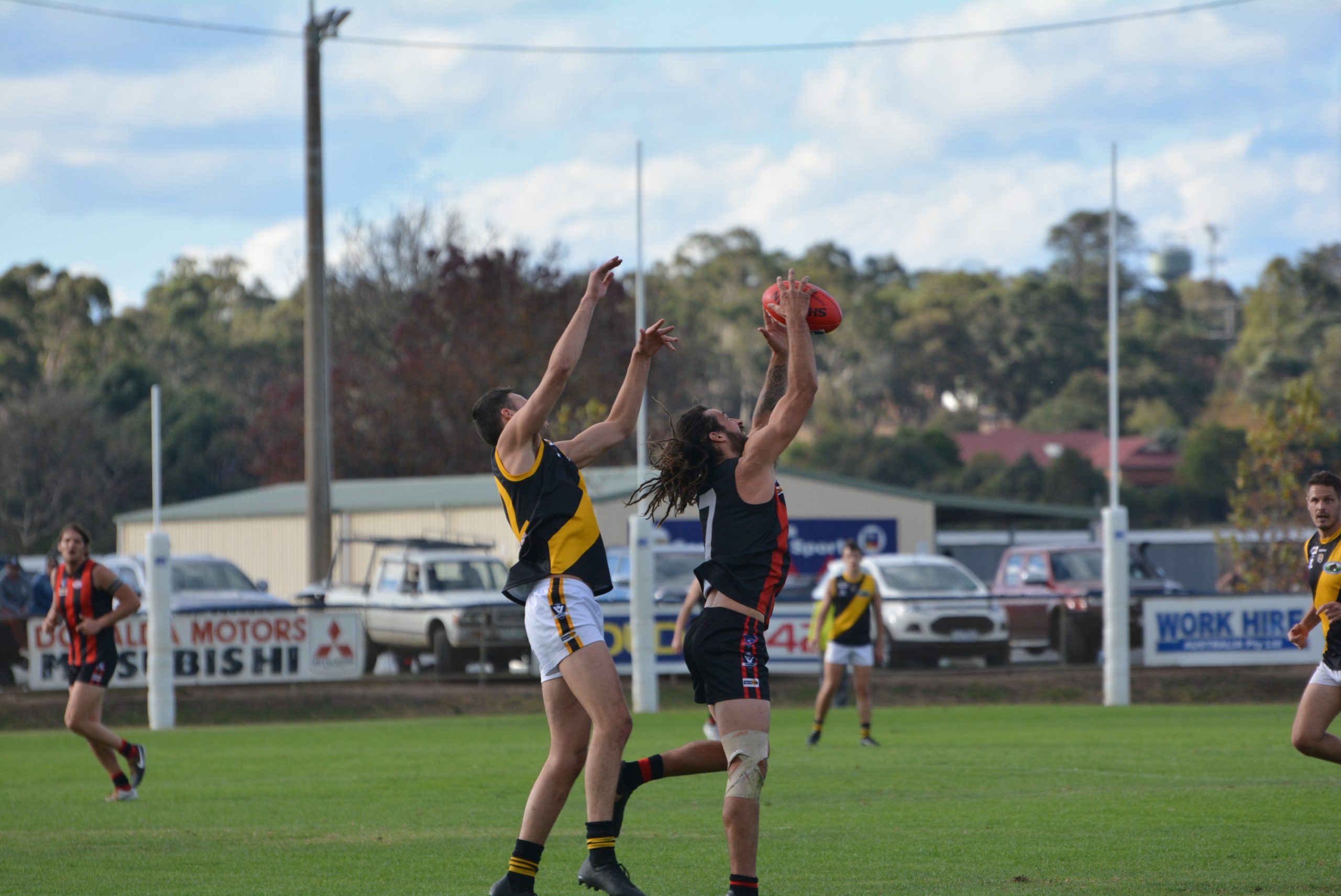 MAFFRA can make a statement on Saturday night at Bairnsdale.

Victory over the third-placed Redlegs will consolidate the undefeated Eagles’ premiership favouritism, while the home team will be looking to prove its worth as a finals contender.

The Eagles continued their winning run by defeating Morwell by 76 points at home last weekend. The Eagles controlled the match throughout, completing the job with a five-goal to one final term.

Danny Butcher continued his strong start to the season, generating plenty of play through the midfield, with Alex Carr stretching the Tigers’ defence, kicking goals and setting up opportunities for teammates.

Sam Pleming again played a big role in a defence which only conceded three goals, and will be tested by the attacking Bairnsdale side.

The Redlegs have won three of their past four matches.

Last weekend, they defeated Wonthaggi at home by 71 points.

Defence was key to the Redlegs’ victory, keeping the Power goal-less in two quarters. Centre half-back Simon Deery was outstanding, and will play an important role in stopping the Eagles’ attack.

Russell Cowan is a player the Eagles’ defence will need to be wary of. Cowan has been named among the Redlegs’ best players the past three weeks.

Cowan has kicked 11 goals this season, and is part of a dangerous Bairnsdale forward line, which includes Brayden McCarrey (13 this season) and Josh Kiss (10). Ryan Lovegrove-Hudson chipped in with five against Wonthaggi.

The Redlegs have kicked the second highest total score this season (476), with only Maffra scoring more (564).

The Eagles have spread the load this season when it comes to kicking goals. While Mitch Bennett has kicked a league-leading 24 goals, he didn’t boot a major against the Tigers.

Andrew Petrou has kicked eight goals this season and Dan Bedggood seven, while Ben Brunt booted five at the weekend.

SALE will take a four-game winning streak to Wonthaggi on Saturday afternoon.

The second-placed Magpies could be missing captain Kane Martin, who injured his knee during last weekend’s win over Drouin. Martin has been vital in the Magpies’ recent run of good form.

The Magpies could regain the services of John Gooch and Lachie Ronchi, who missed last weekend’s match.

A strong start served the Magpies well, racing out to a six-goal quarter-time lead before winning by 94 points.

In defence, the Magpies made the Hawks pay for their errors. The visitors were kept to just four goals for the match.

The Power is in eighth place, with one win from five matches.

Coming off a morale-boosting win over Traralgon, the Power came back to earth, losing at Bairnsdale by almost 12 goals.

Kris McCarthy will need to be on song when he leads the Power midfield against the Magpies’ strong on-ball brigade.

When the Magpies visited Wonthaggi last year, they returned home with a 38-point loss.

NEEDING to find some consistency, Leongatha will host Warragul.

The Parrots rebounded from their home loss to Maffra with a 31-point win at Moe. The victory was more impressive considering the Parrots were two players down because of injuries to Jake Mackie and Josh Schelling in the first half.

The fourth-placed Parrots will take on the Gulls, who snapped a two-game losing run to defeat Traralgon by 25 points.

The Gulls are in sixth place on the ladder, only trailing the Parrots on percentage.

TRARALGON will be looking to end a horror run of form when it hosts Drouin.

The Maroons are in seventh place, having lost their past three matches. There will be serious questions asked around the club if the Maroons lose to Drouin.

The ninth-placed Hawks were outplayed by Sale, and will be keen to return to the form which saw them defeat Warragul a week earlier.

WIN-LESS Morwell will host local rival Moe. The Lions fell from second place to fifth after losing to Leongatha at home last weekend.

The Lions would have taken lessons from the 31-point loss, which will be used on Saturday against the Tigers, who have struggled this season.