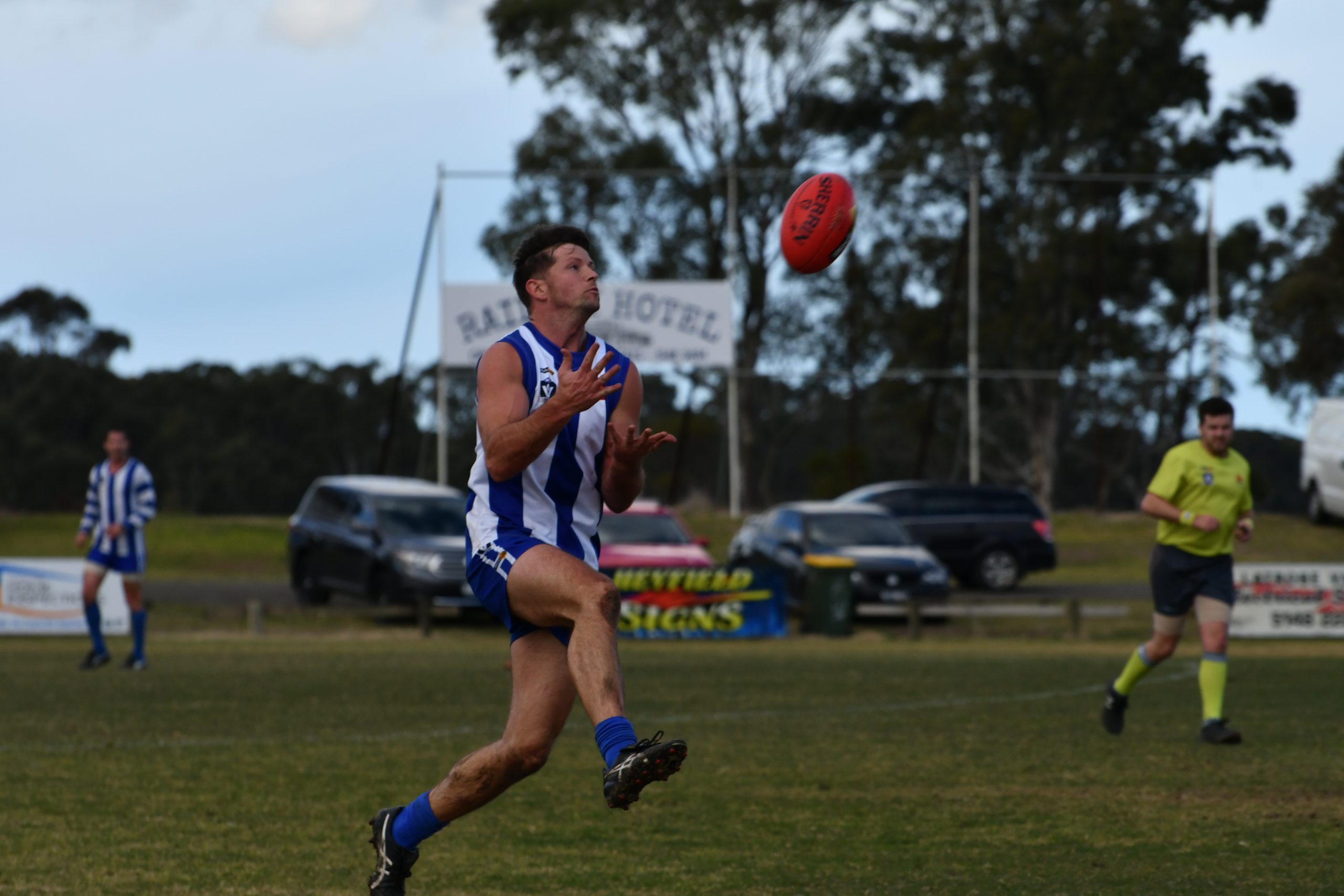 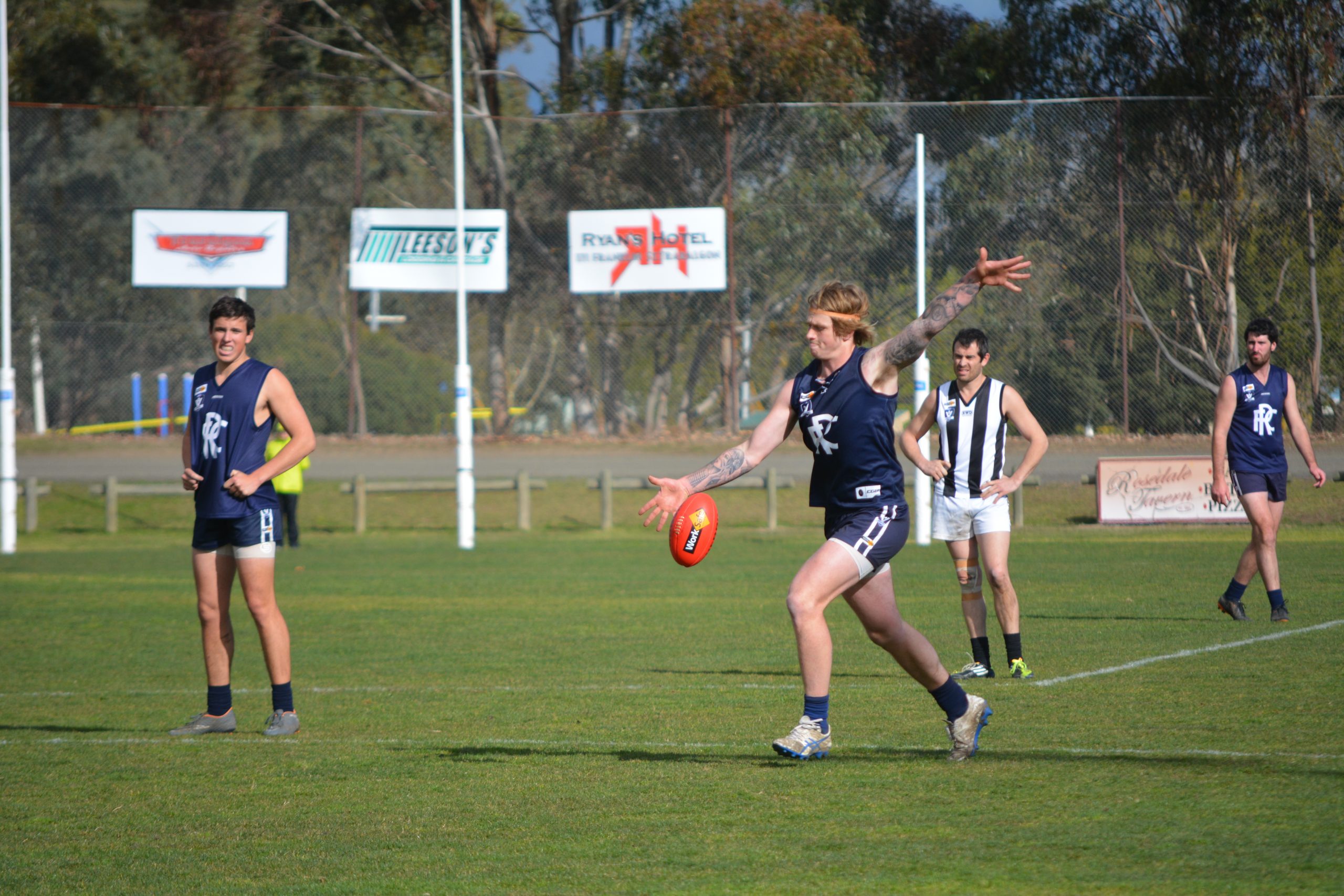 TRARALGON-TYERS United flexed its muscle during the penultimate round of the North Gippsland football season to notch a massive win at Heyfield on Saturday.

Ricky Cochrane also stood out for the Bombers.

The win is the Bombers’ 14th for the season and keeps them a game clear of Churchill in second spot on the ladder.

For the fourth consecutive match, key defender Scott Anderson was named the Kangaroos’ best player. Onballers Matt Bedggood and Jack Woodland also worked hard to keep the home side in the match.

A THREE-goal to none opening term set-up Rosedale’s ninth win of the season.

It took the Blues just four minutes to hit the scoreboard through Brad Caldwell, and another two majors through Jake Suter and Frazar Brouns had the home side up by 21 points at the first break.

The hurt continued for the Magpies in the second quarter as Rosedale added another four to lead by 31 at the main break.

Brouns finished with five goals — including two in the final term — while Matt Royal kicked three and Joel Suter two.

The win is critical for the Blues’ finals tilt and puts them in fifth spot on the ladder — four points ahead of Woodside.

Dale Fleming and Luke Stuckey again provided the Blues with plenty of drive through the midfield.

The Bulldogs came out firing from the first bounce and stacked on five goals to the Tigers’ one to lead by 29 points at the first break.

Gormandale was effectively buried by half-time as the Bulldogs held it to just two goals while piling on another seven of their own to blow the lead out to 11 goals.

Nick Grainger enjoyed his best day out for the year for the Bulldogs, finishing with five goals.

Coach Jacob Schuback kicked four goals in a best-on-ground performance, with two each from Stuart Buckley and Mitchell Evans.

In fourth place, Sale City is level on points with Rosedale in fifth, with the sides to meet in the final round next weekend. The winner of that match will be guaranteed a spot in the finals.

YARRAM returned to the winners’ list with a 35-point victory over Woodside.

Club president Anthony Rodaughan said the Demons “didn’t strike red hot form, but ground out a win” against the Wildcats.

Matt Scholz was back at the helm coaching after a few weeks off through illness.

Griffin Underwood, in his 200th senior and 250th club game for Yarram, “put in a typical workman-like performance”, Rodaughan said, while Jesse Field played his second senior game for the year and was best-on-ground through the midfield, and Dan Vardy and Chris Bruns were both “prominent”.

“That shows how strong the reserves are, that the bloke gets a promotion and gets named best player, so it adds another dimension of pressure for us,” Rodaughan said.

“Their stronger players shared the ball really well and their game plan was a smart one, so credit to them,” he said.

“We’re not playing at the level we want to be, but you can’t be up to that level all the time, so once we get that sniff of cut grass and finals footy, hopefully people will step up.

“I think the loss to Sale City gave us a bit to think about so we need to work hard.”

The Cougars led by 15 points at the first break, and extended the margin to eight goals by half-time. They had opportunities to push the game into thrashing territory in the third quarter, but the Saints’ pain was limited as the Cougars managed two goals from 10 scoring shots.

The misfiring continued but Churchill — with another five goals and seven behinds in the final term — romped home to record a 88-point lead.

Travis Brighton was best-on-ground, while Blake Slater and Brendan Holt both kicked three goals for the third-placed Cougars.