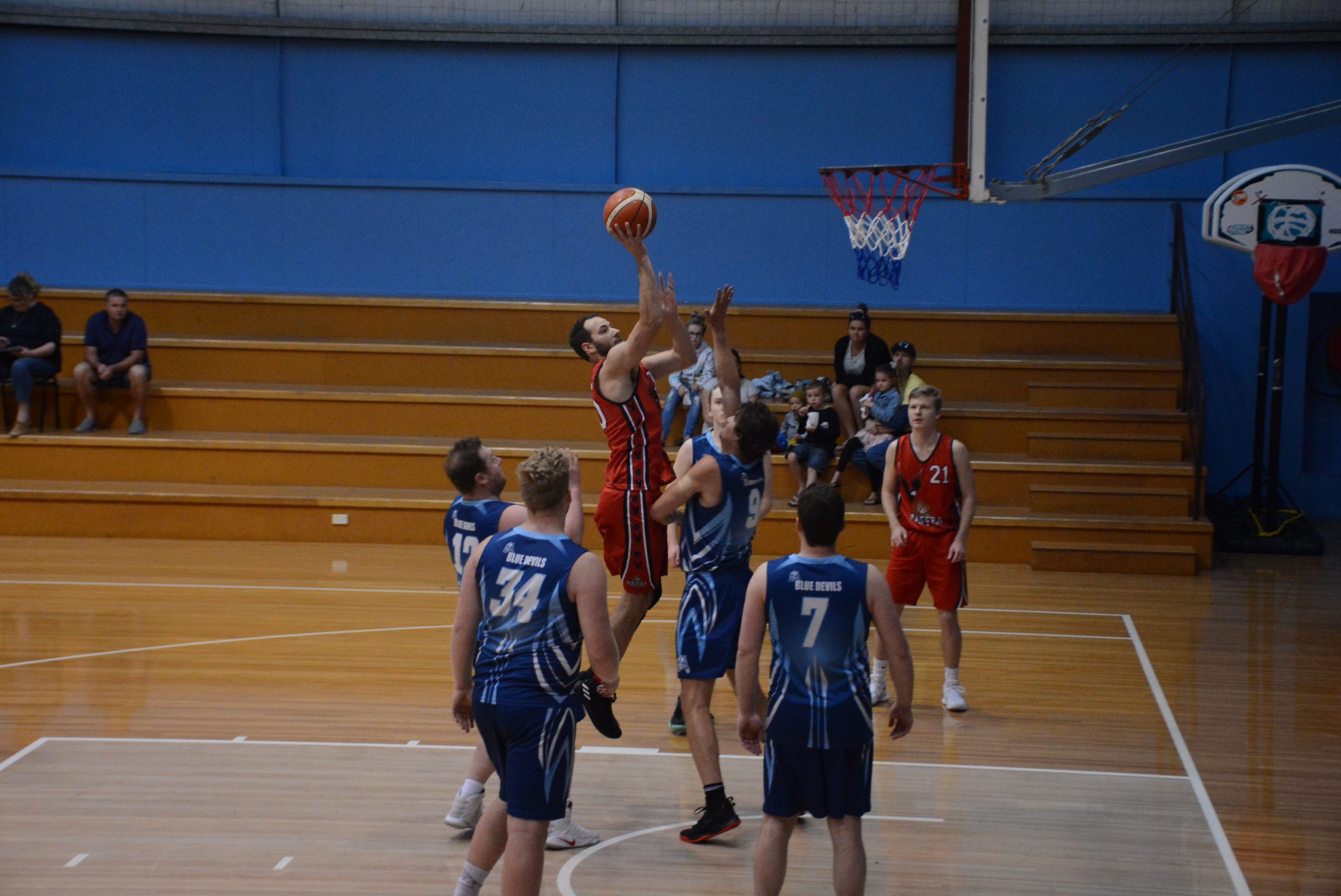 MAFFRA defeated Churchill by a whopping 44 points during round four of the Country Basketball League men’s competition on Saturday.

In front of a home crowd, the Eagles began slow, but quickly upped the ante to comfortably cruise to victory, 117-73.

Top-scoring for the Eagles were Sam Whelan on 26, Andrew Quirk on 23 and Byron Sandeman on 12.

A notable hole in Churchill’s side was arguably one of the competition’s best players, Jordan Canovan, who was felled by an ACL injury after the Blue Devils’ last meeting with the Eagles.

Churchill’s Nicholas Michaelides still made a dent on the scoreboard  with 14, followed by Robert Michaelides and Zac Bezzina on 12.

Maffra coach Kaleb Sclater admitted the slow starts had been an issue for the Eagles in the past, but it was something the team were working on.

“We were down five points in the first few minutes where we used to be down 10 or more,” he said.

“It’s something we have been speaking about and it’s just a mindset.

“Our warm up needs to be like a first quarter so we can start better and faster.”

While Sclater acknowledged the hard work put in by Quirk and Whelan, he attributed the win to an all-round team effort.

“I thought James Whelan was great all round and his leadership was good,” he said.

Sclater said Owen Booth and James Huts, in his debut game, gave the Eagles some aggression and physicality, while Luke Shelton played well off the bench.

“Luke plays hard every possession, dives on loose balls and just creates a bit of a spark,” he said.

“I think we are at our best when we are playing a fast paced running game and that’s what we did.

“We’ve put in a whole new style of play and it’s a work in progress, but we’ve seen when everyone buys into it how good we can be.”

The win sees Maffra retain its third spot on the ladder, separated only by percentage from the second-placed Moe Meteors.

The Eagles have a two-week break to reflect ahead of their next clash against the Western Port Steelers at Mornington on Sunday, November 25.

Taking to the court without coach and CBL scoring leader Mem Bektas, as well as power forward Rob Ball, the Sonics understood the outcome would depend on how their guards fared against Traralgon’s bigs.

The game was scrappy early, with the teams sounding each other out, but Billy Hughes and Luke Williams found their feet early for the Sonics, who etched out a lead.

Sale’s early dominance was jeopardised by foul trouble and Traralgon grit, as the visitors steadily climbed back into the game.

The third quarter was an arm wrestle as Sale broke away for another headstart and Traralgon’s big centres responded by regaining lost ground, causing trouble in the Sonics’ offense.

The Sale guard combo of Hughes, Williams and Marcus Cope hit the fourth quarter running to put the victory out of the Thunderbird reach.

The three guards began picking apart the visitor’s defence with quality shooting from deep, strong running on the break and pin point passing.

In the dying minutes, Sale pulled out to an 18 point lead.

While the T-Birds battled all the way to the final siren, they pulled up short, going down by nine points.

Top-scoring for the Sonics were Hughes on an impressive 29, Cope on 21 and Williams on 16.

Traralgon’s Christian D’Angelo scored 28, followed by Trent Everett on 16 and Luis D’Angelo and Jarrod King-Church on nine points each.

After a week off, the Sonics will travel to Warragul in round six, facing the Warriors on Saturday, November 17.

In other men’s CBL matches from the weekend, Korumburra was trounced by Warragul 82-37, Churchill saved face with a 91-86 victory over Moe on Sunday, and Warragul had a convincing 85-51 win over Western Port.