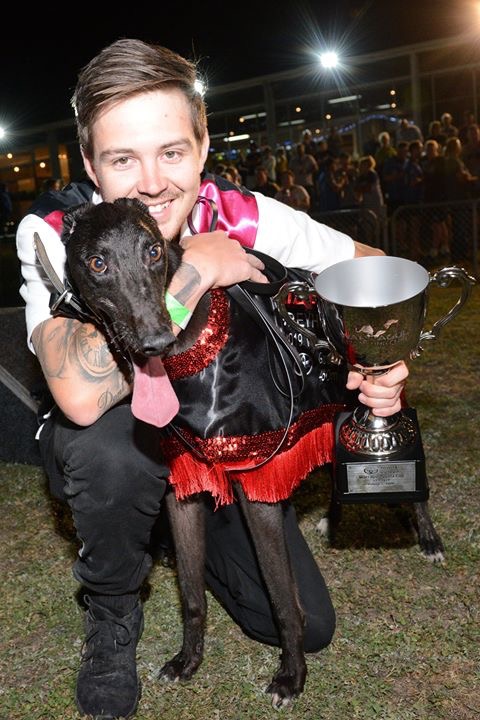 It was a case of fourth time lucky in a provincial feature for Dyna Hunter and trainer Steve Collins, with the son of 2014 Melbourne Cup hero Dyna Villa having run second in the Ballarat Cup and fourth in the Healesville Cup. He was also scratched from the Geelong Gold Cup due to injury after winning his heat.

Dyna Hunter qualified for the $47,000 to-the-winner Warragul Cup after running second in his heat, when run down by fastest qualifier Elevated in 25.48 seconds.

Drawn perfectly in box eight for the 460 metre race, from where he boasted an unblemished six from six record, Dyna Hunter started $3.40 favourite in a keen betting affair, ahead of Orson Allen ($4.40), Big Flood ($4.60) and his heat conqueror Elevated ($4.90).

Dyna Hunter came out running to lead youngster Jebrynah ($10.20) and Big Flood and forged clear turning for home as he defeated the brave Jebrynah, which was having just his 11th start, by 2.46 lengths in 25.54s.

“Box eight is the perfect draw for him because he isn’t always the best out of the boxes,” said Jake Collins, son of trainer Steve.

“The Warragul Cup field, it was a close your eyes and cross your fingers kind of race. Before the race, on form, boxes five, six and seven wanted to move to the fence and that is what happened to make room for Dyna Hunter out wide.

“To win a country cup after being beaten on the line in the Ballarat Cup in December made this win that much more special.

“I am not sure where Dyna Hunter goes after this Warragul Cup win. That’s Dad’s department and will depend on how he pulls up after tonight.”

Dyna Hunter has won 17 of his 36 starts, with great credit going to the Collins family after their newly-crowned Warragul Cup victor suffered a serious shoulder injury at just his second start, only one week short of one year ago.

“It was a fantastic achievement from Mum and Dad, who worked hard with him after his runs at Sale where he didn’t pull up too well,” Jake said.

“From the first day he came to the kennels I was drawn to his fruity personality. He is the kind of dog that you can sit in the kennel with him and he will put his head on your lap for a pat. It also helps that he has a bit of ability.”

Earlier in the night, the keenly-anticipated return to the track of Rippin’ Sam ended in anticlimax, with the superstar stayer finishing at the tail of the field in the Warragul Distance Cup over 680m.

At his first appearance since September 16, Rippin’ Sam started $1.90 favourite, but dropped back alarmingly early in proceedings as Correy Grenfell’s Dyna Chancer ($2.20) romped to victory.

In the first of two ‘Dyna’ cup successes for owner Brendan Wheeler on the night, Dyna Chancer, runner-up in the group one Sale Cup at his previous start, claimed the $10,000 winner’s purse in a new course record time of 38.58s.

The son of another Wheeler-bred Melbourne Cup winner in Dyna Double One smashed multiple group one winner Ring The Bell’s previous benchmark of 38.82s.