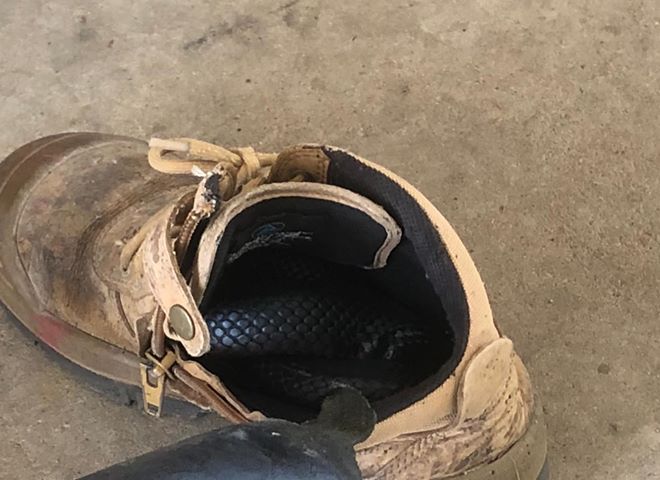 IT’S like a Brothers Grimm version of Puss in Boots, except a lot more serious.

A Red-bellied black snake gave the Alexander family of Maffra a fright on Monday morning, after it sought refuge in a boot on the family’s porch.

Daughter Chloe Orchard and her husband Ryan were visiting Chloe’s parents in Sellings Lane about 11am when they saw the snake on the front steps.

It disappeared pretty quickly, but on further inspection the family noticed it had taken cover in the nearest thing — dad Craig’s work boot on the porch.

Surprisingly, without too much panic, quick-thinking Craig, with Ryan’s help, used a shovel to scoop up the boot, complete with snake, before placing it on the back of the ute and relocating it to a remote area well away from houses or animals.

Red-bellied black snakes are one of eastern Australia’s most commonly encountered snakes, and can grow to 2.55 metres.

They are quite easy to identify by their glossy black upper parts, bright red or orange flanks and pink or dull red belly.

Although they can attack if provoked, they are not an aggressive species and generally retreat from people, which would explain the slippery visitor’s eagerness to hide in the nearest receptacle when discovered on the porch.

The venom can cause illness, but no deaths have been recorded from its bite.

This isn’t the first time the Alexanders have had a frightening, face-to-face encounter with a Red-belly.

Three years ago another one — or possibly the same culprit — decided their screen door was the perfect resting place.

“It was a bit difficult to come in and out of the house at the time, as it wound itself around the door,” Chloe said.

“But dad got it off with a broom and it disappeared.”

Chloe said it was the first snake sighting this year for the Alexanders, who live on a four hectare property.

The experience has certainly unnerved the family, with everyone vowing to double check their shoes before donning.

Maffra has had its fair share of snake encounters already this summer, with a Maffra woman finding a snake wrapped around her toilet in November.

She endured a long, nervous wait for a snake catcher to arrive from Morwell.

“Eastern Brown Snakes, Tiger Snakes, Lowland Copperheads and Red-Bellied Black Snakes are all encountered in the Gippsland region,” he said.

He said the best course of action was to remove pets from the area and move away while the snake passes.

“Snakes are generally very shy and prefer to keep away from people — often snakes are found in backyards because they are passing through on their way to other habitat,” he said.

Snakes are protected under the Wildlife Act 1975.