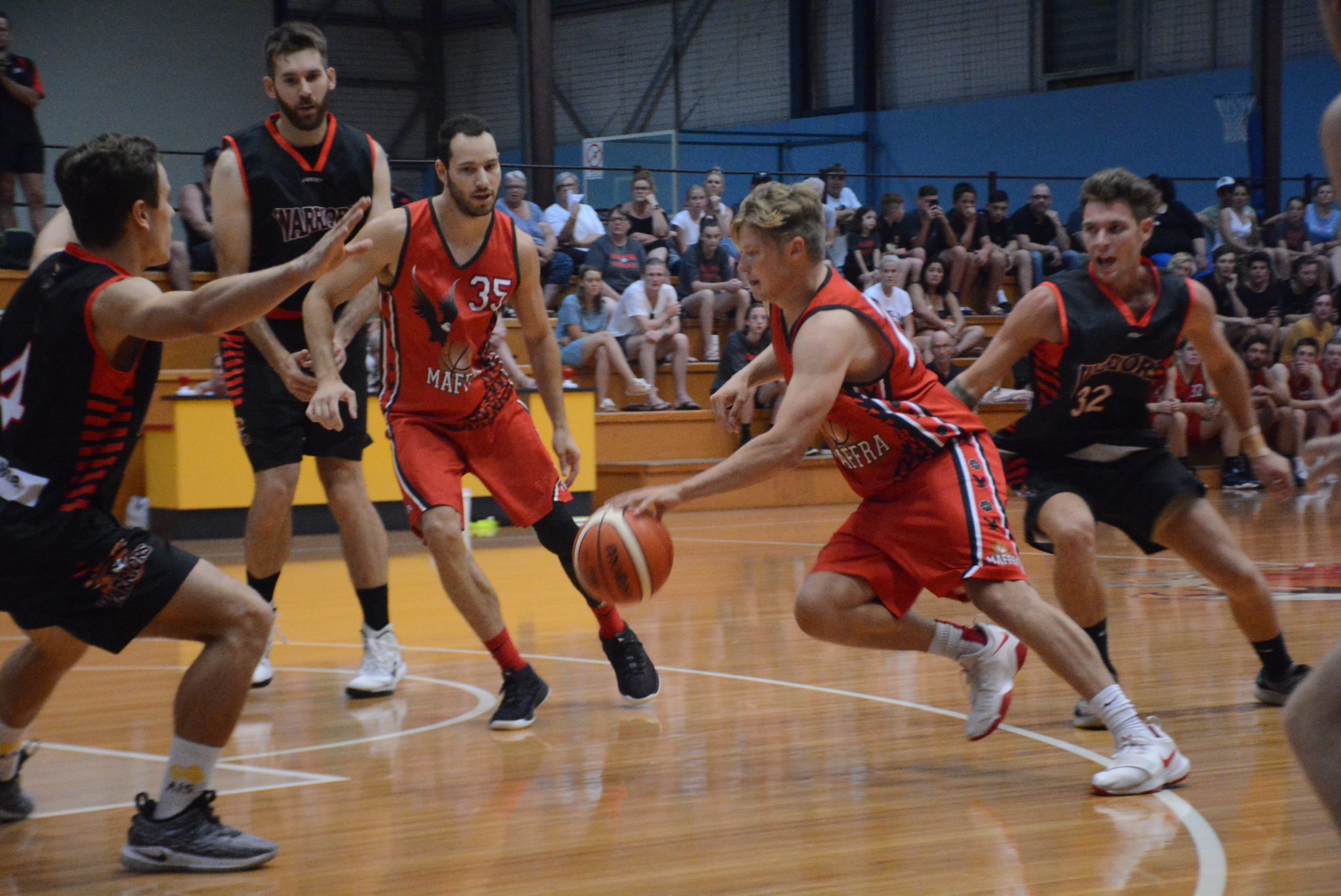 The grand final will be played on Saturday night at the Cameron Sporting Complex, Maffra, from 8pm.

As Warragul have been the only team to beat Maffra this season, back in round two — 63-75 on the Eagles’ home court — both teams pulled no punches with intensity that felt more like a grand final than a semi-final.

Eagles coach Kaleb Sclater said the team really stepped up, in a “gutsy” win that each player contributed to.

“I was wrapped with the boys, everyone did their bit,” he said.

“They just competed on every possession, which was a focal point from the start.

“We looked at their strongest player — Dwain Scott, who averages 18 points per game — and we kept him to 10, which was a big help.”

Succumbing to pressure toward the end of the game, Maffra suffered big losses, as star guard Sam Whelan was fouled off in the third quarter, followed shortly by Owen Booth in the fourth and Ben Brunt in the first over time.

Key forward Andrew Quirk also went down in the fourth quarter with a suspected ruptured ACL.

“Even though we had a few challenges, I still believed we could get it done,” Sclater said.

Bill Pleming and James Whelan capably stepped into the role of vice-captain and captain respectively in the final quarter and throughout overtime.

“Bill Pleming was brilliant playing 17 minutes straight when Booth got fouled out, and playing on guys much bigger than him,” Sclater said.

“James started cramping during the fourth and he was struggling to stay out there.

Young players such as Declan Scriven, aged 16, and Byron Sandeman, aged 19, were also given court time to prove themselves, contributing heavily.

“It was good to see for them and their confidence, because they don’t always get to play a lot,” Sclater said.

As the final seconds ticked down, Brent Walker made light work of a rebound, racing up the court, but missed a contested lay-up.

This was quickly corrected by Sandeman for two points, putting Maffra ahead by four points 25 seconds out from the final buzzer.

Warragul’s Murray Myer grabbed an offensive rebound and retreated to the three point line, bringing the scores back to one point the difference with five seconds to go.

With five team fouls each, the ball was brought forward to the foul line, where the Warriors’ James Portbury intentionally fouled Maffra’s James Whelan, who scored both foul shots — putting Maffra ahead at 99-96.

Pleming was then fouled by Warragul’s Jarrod Castle with 0.5 of a second left on the clock.

Just to seal the deal, Pleming made oneshot, and in doing so, brought up the Eagle’s century, 100-96.

Sclater described the crowd as “unreal”.

“In the second over time, I think the crowd was something that really spurred the boys on, with Quirk going down and all the foul outs the other boys just dug deep,” he said.

“The crowd was a massive influence for us, and hopefully it will be bigger this week.”

The Eagles will meet defending premiers Moe Meteors on Saturday from 8pm at the Cameron Sporting Complex, Maffra.

Last year, Moe knocked Maffra out of the semi-finals by 17 points, before going on to defeat the Warriors in the grand final by three points.

In the last meeting between Moe and Maffra, the Eagles proved things certainly can change in a season, walking away with the victory by more than 40 points.

Sclater said to prepare, Maffra will just be going over what the team does best.

“This week, we will just be going over our game plan — that’s got us here — and try to tighten that up and cover all bases,” he said.

The Meteors advanced to the grand final after defeating Churchill 89-73 in their semi-final.

The women’s grand final will also be played at Maffra on Saturday night, with Korumburra taking on Warragul from 6pm.

In the semi-finals, Korumburra continued its undefeated season with a 71-62 victory over Churchill, while Warragul defeated Traralgon 85-54.