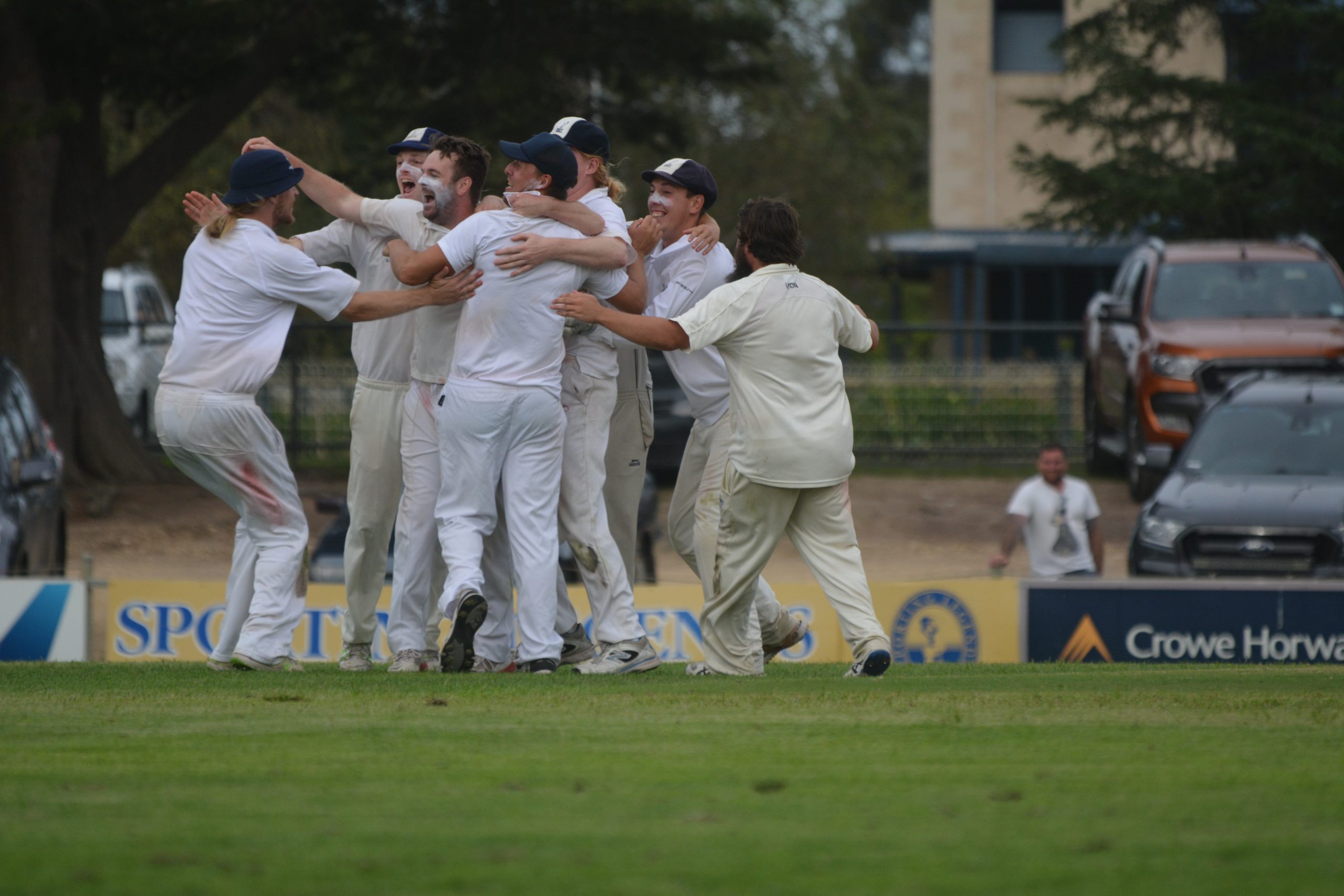 WITH the dust settled since their history making win in last month’s Sale-Maffra Cricket Association first grade grand final, Boisdale-Briagolong players, members and supporters are slowly coming to grips with the fact that they climbed from back-to-back wooden spoons to reach the premiership summit.

Against overwhelming odds, the Saints returned in 2019 from the Christmas break languishing in second last position, to then win their last eight matches to claim the title.

What is even more astounding is the fact that before their eight game winning streak, Boisdale-Briagolong had won just four of their previous 40 games.

Scraping into the finals, the Saints took care of minor premier Collegians in the semi-final, to set-up a showdown with SMCA powerhouse Bundalaguah.

As the coin was tossed on a rainaffected first day of the grand final at Stephenson Park, Boisdale-Briagolong was sent in and set about negotiating the tricky conditions as best it could.

“When we got put in it was a sort of plasticine pitch so we thought any score over 100 to 120 was going to be competitive,” club stalwart Stephen Noble said.

“We lost wickets fairly regularly but you can’t understate how well the Leeds brothers batted, they faced a lot of balls and then Liam Hurst and Louie Howard put on 40 across 25 overs and that really set us up.

“We knew that if we had wickets in hand coming into the second day and could get anything over 120 we had a fair chance of winning.”

Because of lost time, the Saints continued their innings into day two after being six down at stumps on day one.

After struggling to sleep as one of the incoming batsman overnight, Noble was overcome with nerves and decided a trip down memory lane at sunrise may help.

“I was up Sunday morning and went out to the farm at the old man’s, where they’ve still got the ball on a string which I used to use as a kid. I was hitting that at first light just because I was that nervous and thought ‘oh well, that’s what I used to do as a kid and it worked’,” he said.

When play resumed, Englishman Jordan Price scored a fine 57, as Boisdale-Briagolong was bowled out for 159, which in the context of the conditions the side felt was more than competitive.

“Once we got past 150 we thought we were an 80 per cent chance of winning,” Noble said.

“On the second day the pitch was still doing a lot, Longford (Cricket Club) did a really good job to get it where it was during the week, but there was a lot in it and on a slow outfield it was always going to be a tough task batting.”

As Bundalaguah began its reply, with league co-player of the year Cloete Buitendag opening the batting, the Saints knew they would need to see the back of the South African to give themselves the best chance of running through the middle order. Fortunately for Boisdale-Briagolong, it had an ace of its own in opening bowler Todd Mann, who was able to strike early and see Buitendag dismissed for only five.

“I just bowled a few out swingers then he played across the line to one and tried to turn an off cutter that I took caught and bowled,” Mann said.

Noble said after the early breakthrough the match stalled for some time before the Saints were able to strike again.

“There were some nervous moments when Nigel Sellings and Jason Langshaw batted for 20 overs and they looked fairly solid but apart from that wickets fell at intervals where we thought we were ahead of the game,” he said.

As Bundalaguah sank to 8-72, it became only a matter of time before Boisdale-Briagolong would be tasting premiership glory.

“James Matthews [Bundalaguah batsman] looked alright and the wicket appeared to be flattening out and he and Sam Bedggood were pretty solid but he [Matthews] was a bit unlucky and played one on and it got down to two wickets with 80 runs to get so we were pretty confident then,” Noble said.

With the score 9-111, Bulls captain Bedgood tried in vain to hit a Liam Hurst delivery over the midwicket fence, only to be caught by Saints skipper Toby Leeds, who fittingly had the ball in his hand as the winning wicket was taken.

Wild scenes erupted, as jubilant supporters ran onto the ground to embrace the players.

“Two minutes after the last wicket it was just pandemonium, people you’d forgotten even used to play for the club were rushing out and I sprinted as fast as I could from the boundary to the middle and the crowd was already there before I was,” Noble said.

With the drought broken, attention quickly turned to those who had served the club over the decades, many of whom had seen the Saints suffer hammerings year after year.

“Michael Cassidy’s been around for a very long time and you could see the emotion when we won and there’s a lot of players who have played over 20 years, guys like Dennis Murphy and Sean Padman, who have never seen anything like it and probably never thought we’d actually quite get there,” Noble said.

“My favourite part was going to Jason Phillips, we’d played more than 200 games together and only ever really got close once before, so I made sure I got hold of him first and then just got around to as many people as possible and there were just hugs and kisses going on for a couple of minutes and then it was a real blur, the presentation was all over before I knew it and then we were just in the changerooms, sitting there having a chat, that last half hour after the game I can’t really remember what happened.

“We then came back to the clubrooms and there was a fair bit of the community there and everyone was just so happy and there were a lot of ex-players that turned up and we just kicked on. I left at 4.30am, was one of the first to leave, so you can imagine the celebrating that went on.”

The victory was especially poignant for Noble, who admitted he thought premiership success would be something that eluded him.

“Five years ago we lost the grand final by one wicket, we had a good team then but a few of us were getting a bit older and I thought that was probably our big chance, then the last two years we’ve only won one game in each season,” he said.

“So it all just turned out perfectly and you couldn’t have scripted it better.

“Unfortunately, the win wasn’t good news for all, as Boisdale-Briagolong opening batsman Mick Roberts came down with tonsillitis two days before the match and selflessly ruled himself out.

“Poor old Mick Roberts has played A grade for the last 10 years or so, and was feeling really crook and could hardly get out of bed, so you have to feel sorry for Mick, but we made sure he was still involved and he was definitely very much a part of it,” Noble said.

Celebrations continued long after the grand final, although Noble said the players had now been able to at least take it in.

“On the Tuesday morning I watched the replay on YouTube and it sort of sunk in then,” he said.

“I’d say in the last 20 or 30 years its been the biggest win Briagolong’s had in the town.”

Life member and former president Michael Cassidy was understandably overcome with emotion after the Saints’ victory, and described it as the greatest moment in the club’s history.

“Like everyone it was just an overwhelming feeling of joy and relief, and we were just so proud of what they were able to achieve,” Cassidy said.

“They were always good cricketers it was just a matter of getting them to play at their full potential, and to have the majority of the players that played in the grand final come through our juniors is great reward for them sticking by the club.”

The Saints’ first grade premiership of 2018-19 is sure to go down as one of the greatest local sporting feats in history, and will be looked back on in years to come with both inspiration and shock at the same time.