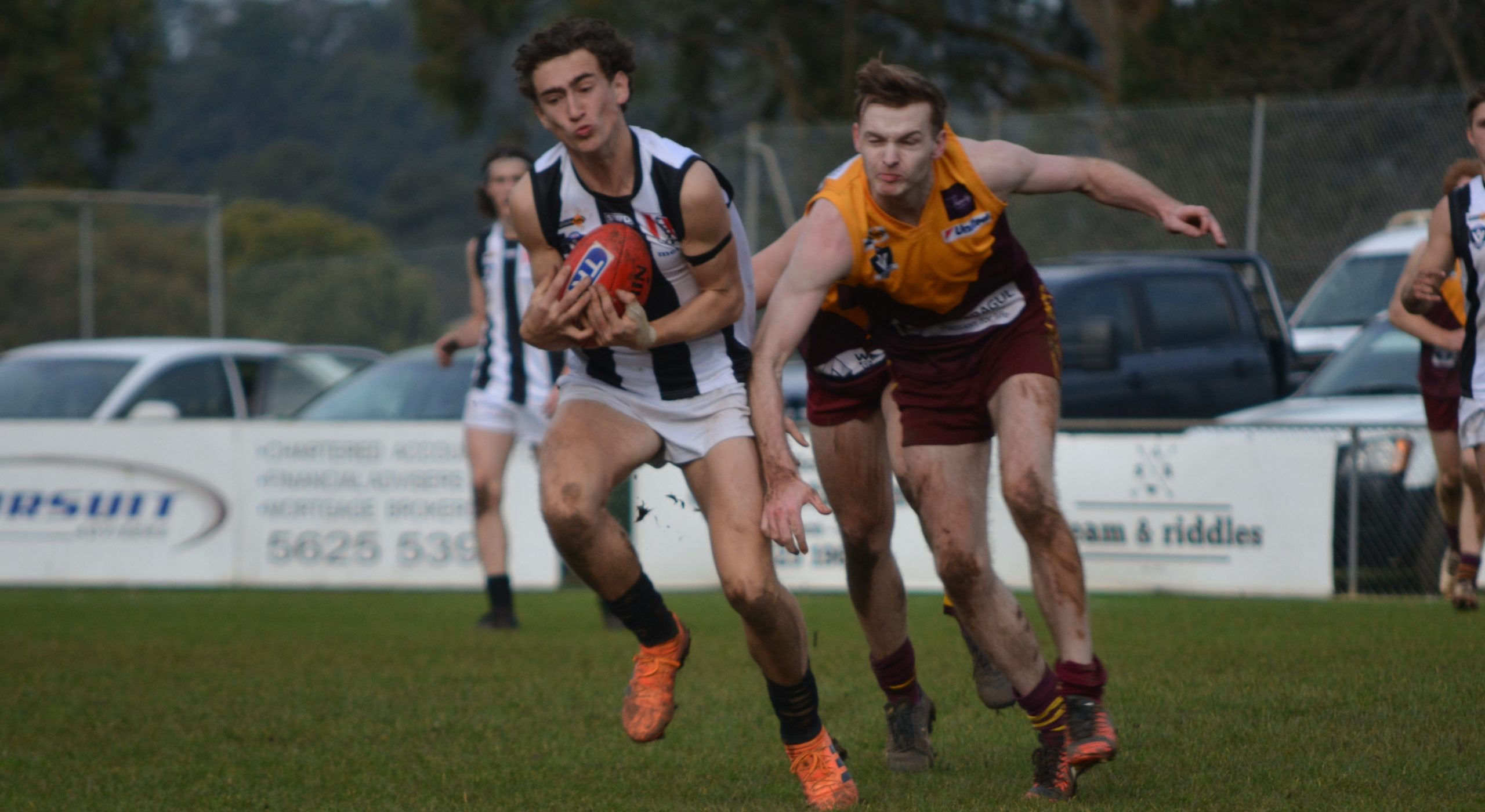 Drouin has been struck hard with injuries, fielding a side which had lost a lot of the midfield potency from earlier this season.

Names such as Morris, Robinson and Kingi were missing.

The Magpies have had to deal with injuries of their own – an unfortunate incident had left Zac Hurley requiring surgery on his wrist, adding to the number of other players who have been missing.

The inclusion of Kane Martin was paying dividends early, the midfielder copped a heavy tag as usual but, with his experience and aggression, was providing a headache despite the close attention.

Sale’s aggression and pressure was proving too much for the Hawks as their defensive exits and lack of bigger bodies around the stoppages became evident early in the contest. Despite the five-goal to one quarter, the Sale defence was made to work hard with Chris Laverty putting on some great defensive efforts.

The Magpies did not let up in the second quarter, and despite having the majority of play, a defiant Drouin put numbers in the back half with the repeat entries forcing Sale to play either too wide, shallow or at times a little too unselfish for the it to fully capitalise in the forward 50.

The Hawks were kept to only one goal in the first half as the Magpies entered the main break with a 48-point lead.

The Magpies again controlled play in the second half.

Jack Lipman was gaining first use of the ball, while Jordan Dessent and Martin’s work in tight was terrific. Their ability to free up Jayden Allison, Jack McLaren and Wil Leslie was notable.

Sale key forwards John Gooch and Brad Dessent loomed ominously, but it was the fleet-footedness of Jack Allman, Kyle Simpson and Jack McLindin which was benefitting the most from the forwards contests.

Drouin kicked two late goals, but the 68-point margin at three-quarter-time was never getting reeled in with the conditions.

The Magpies dominated the final quarter, kicking seven goals to push the margin towards 100, as the mature hard bodies of the Magpies was too much for the lesserexperienced Hawks.

Jordan Dessent was tough in tight, feeding the ball out at will, while Martin’s skills were on show.

Both Leslie and McLaren were electric on the outside, while Allison worked nicely into the game after recovering from a serious hamstring issue.

Mitch Dowse and the rejuvenated Jackson Glenane’s pressure and attack at the ball was highlighted across the middle and forward half of the ground.

Brad Dessent (five goals) and Gooch (five goals) were prominent up forward, with the structure, pressure and work rate of small forwards in Jarrod Freeman, McLindin, Simpson and Jack Allman also a highlight.

The Magpies’ defence controlled the Hawks tightly, but also to setup play.

The returning Shane Fyfe and the experience of Laverty shone through, helping the younger players set-up well behind the ball.

MAFFRA returned from Warragul with a 49-point win and top spot on the Gippsland League football ladder still in its keeping.

James Huts stood-out at full back.

Without captain and leading goal kicker Daniel Bedggood, the Eagles had eight players boot majors, led by Alex Carr, who kicked four when he drifted forward.

The visitors kicked five goals to one in the first quarter to lead by 26 points at quarter-time. The Gulls reduced the deficit to 13 by half-time after kicking four goals to two in the second term.

It would take some work for the Eagles to shake off the Gulls after both sides only managed a goal each for the third quarter.

Leading by 16 points at the final change, the Eagles kicked seven goals to two in the final quarter.

Defenders James Davidson and Brad Hefford were the best players for Warragul, which is now on the bottom of the ladder.

MOE consolidated a top three spot with a 43-point victory over Bairnsdale.

With fifth-placed Drouin losing again, the sixth-placed Redlegs were unable to eat into the two-game margin.

Wonthaggi joined Traralgon, Morwell and Warragul on four wins for the season, three games outside the top five.

LEONGATHA sealed a finals spot after defeating Morwell by 32 points.

Cameron Stone had plenty of the ball on the wing for the Parrots, while Nick Nagel kicked four goals and Cade Maskell three.