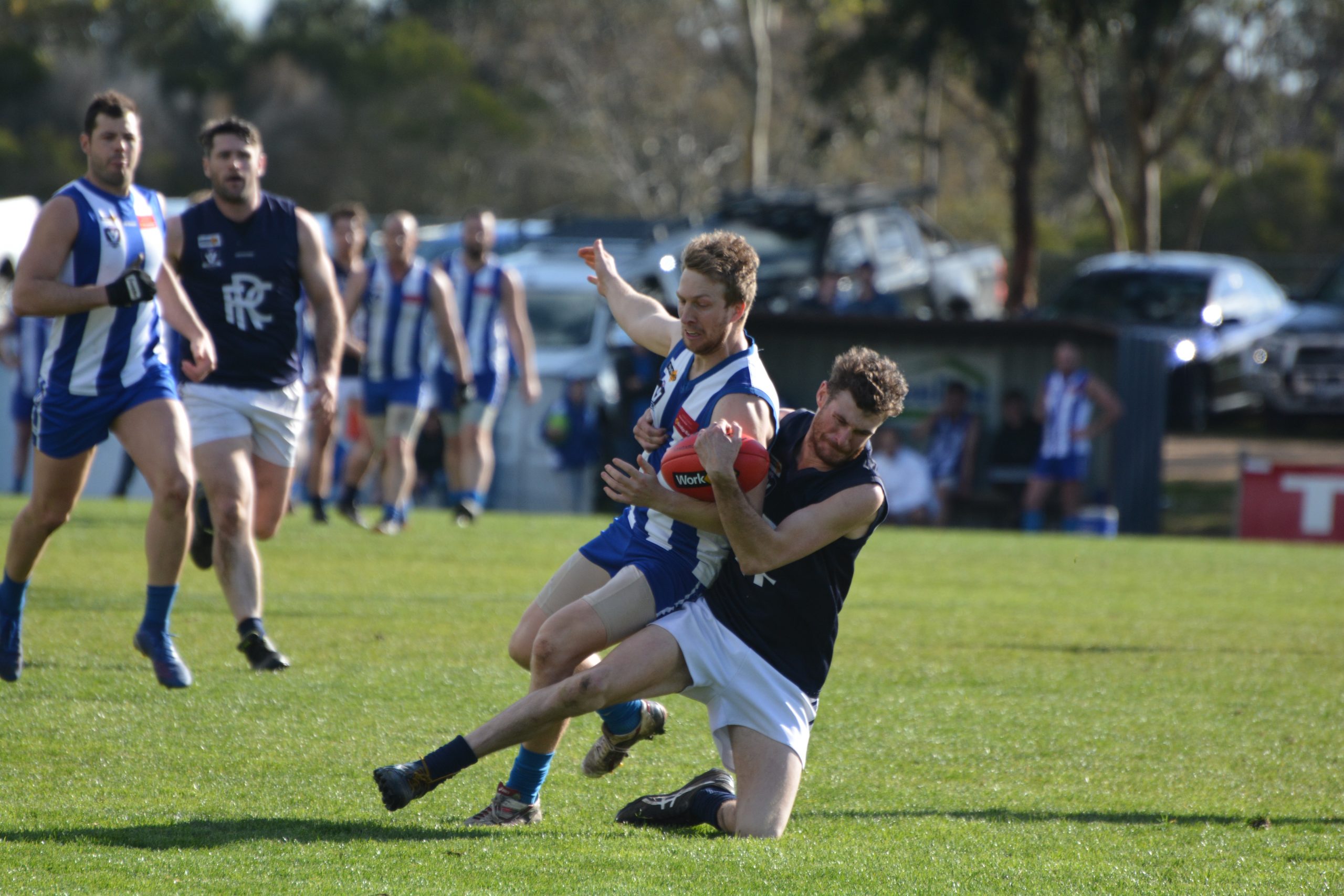 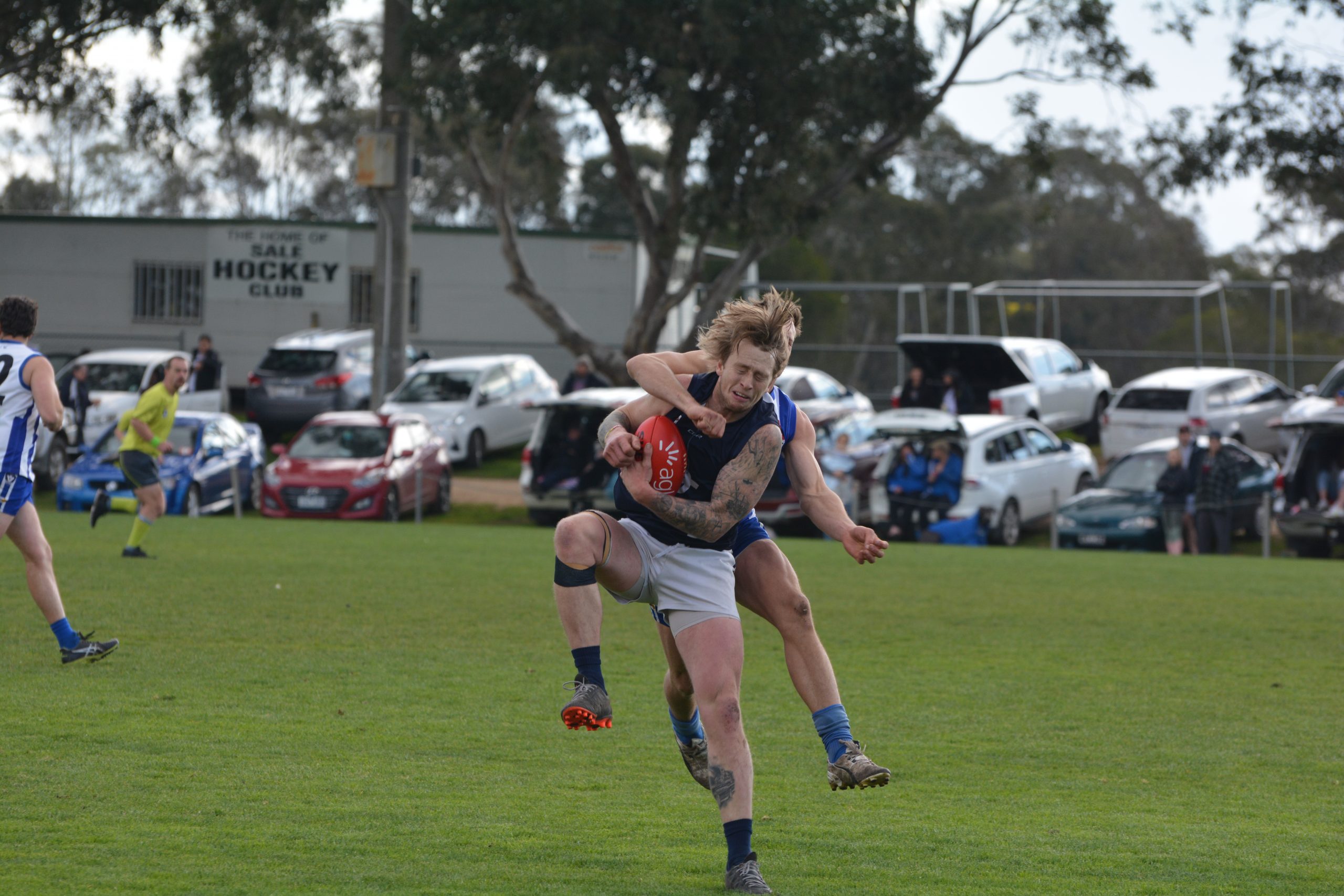 ROSEDALE knocked Heyfield out of the race for the North Gippsland football premiership with a 16-point victory in the elimination final.

The Blues trailed by nine points at half-time, before kicking 10 goals to six in the second half.

The Kangaroos were a man down in the final term, after Adrian Cox was reported then shown a red card following a third quarter scuffle.

Rosedale set the pace early, moving the ball better than the Kangaroos, who were not effective going into their forward 50.

Hayden Bell kicked the first goal in the opening minutes after receiving a free kick.

Goals from Brad Scott and Frazar Brouns gave the Blues a 17-point lead 10 minutes into the match.

Getting more of the ball, Heyfield got back into the contest and, with goals from Kodie Woodland and Charlie Driffield, trailed by only four points at quarter-time.

The break didn’t halt the Kangaroos’ momentum, as Driffield’s run from a stoppage resulted in his second major and the lead of his team.

But the Blues’ hard running from defence earned them back-to-back goals and a nine-point lead.

The margin was reduced to three points after Nick Woodland took a strong mark in a one-on-one contest and kicked a goal.

A free kick awarded off the ball allowed Jesse Jackway to kick a goal and put the Kangaroos back in front.

The Blues kicked seven goals to three in the third term to take a 19-point advantage into the final quarter, in which both sides kicked three goals.

Dylan Patmore played solidly in defence, Adam Wallace on the ball, and Brad Berry across half-back.

SALE City defeated Rosedale in the reserves and thirds.

In the reserves, the Bulldogs trailed by seven points at half-time,

Brad Fleay kicked four goals in a best-on-ground performance for the Bulldogs.

Jed Malone and Braydon Capes stood-out for the Bulldogs, with Zane Petrovic and Ben Brett both kicking three goals.

YARRAM sent a message to minor premier Churchill, that the Demons won’t give up the premiership without a fight.

The Demons defeated Traralgon-Tyers United by 55 points in the qualifying final on Saturday, 13.26 (104) to 7.7 (49), setting up a second semi-final against the Cougars.

The Demons blew TTU away in the first quarter at Heyfield, kicking 4.10 to nothing, but inaccurate kicking for goal kept the door ajar for the Bombers.

By half-time, the Demons led by 40 points, and the match was effectively over.

Yarram returned to its off-target ways in the third term, kicking 4.11, while the Bombers managed only one behind to be 74 points behind at the final change of ends.

The Bombers won the final term, kicking four goals to one, but the damage had already been done. The Bombers will need to lift when they meet Rosedale in the first semi-final.

Dan Vardy was outstanding for the Demons, playing in the ruck and up forward. Vardy and Jacob Davis both kicked three goals.

Griffin Underwood and Chris Bruns were superb through the midfield, linking well with Louis Rodaughan, while Jack Weston led a strong defence.

The Bombers were best-served by Tyler Mustoe, Dougal Williams and Ben White, who kicked three goals.

LIKE in the seniors, the reserves second semi-final will be between Churchill and Yarram.

With scores level at three-quarter-time, the Kangaroos kicked two goals to one in the final term.