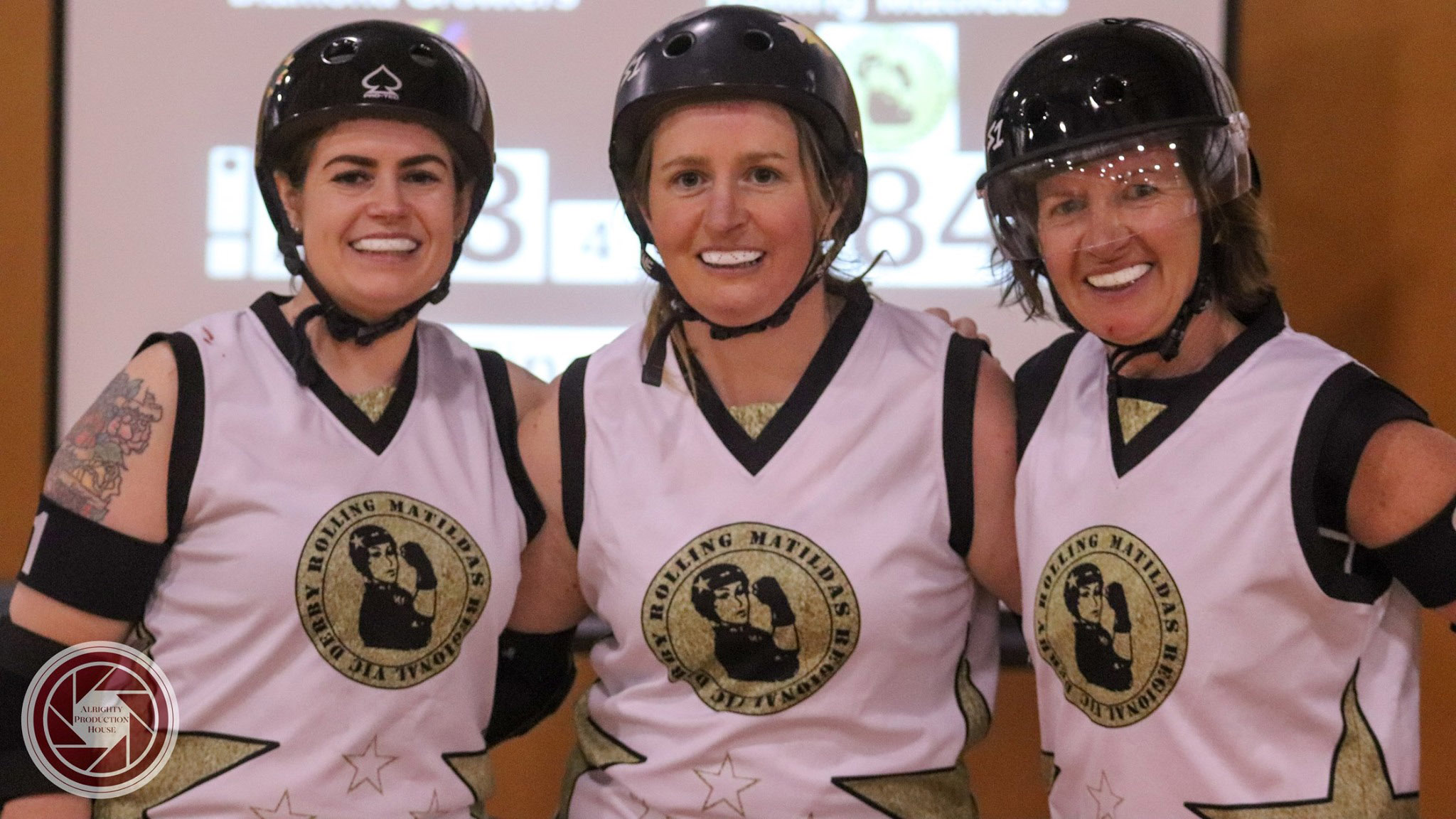 GIPPSLAND Lakes Roller Derby skaters were a pivotal part of Team Regional Victoria: The Rolling Matildas’ history-making win against the Diamond Growlers in the Statewide Stampede.

Kelly Kirkham of Sale, Liz Griffiths of Paynesville and Kylie Fordham of Forge Creek travelled to Daylesford for the sixth and seventh rounds.

The Rolling Matildas are made up of skaters from across Gippsland, Warracknabeal, Mildura and the Mornington Peninsula, giving them the chance to compete at a state level where opportunities do not otherwise exist.

Over five years, the team has competed all over the state and country, but without success, until now.

The sport of roller derby made a resurgence in Australia in the early 2000s.

With two teams of between eight and 15 players on each side, the game is played on an oval track over two, 30-minute halves consisting of up to two-minute intervals called jams.

In each jam, four blockers and one jammer from each team take to the track.

The jammer is the skater who races around the track scoring a point for each opposing blocker they pass, while the blockers’ job is to stop the opposing jammer from scoring points, while helping their own jammer through.

While in the past the sport was known more for its hard hits and epic falls, today it is more a game of strategy, with blockers switching quickly between defence and offence.

In freezing conditions for round six of the Statewide Stampede, TRV took to the track against the Diamond Growlers, a combined team from Otway and Diamond Valley.

TRV took the lead early, but the Diamond Growlers fought back. TRV was never out of reach, trailing by 36 points at half-time.

TRV came back in the second half, but was still down by 25 points with eight minutes to go. Only in the final minutes did TRV manage to bring it back to within seven points.

The anticipation rose and the crowd began to cheer at the prospect of TRV taking their first ever win. With 30 seconds remaining, a final jam was called and Fordham took to the track as jammer.

Fordham took the lead early, leaving the opposing jammer behind a wall of TRV blockers, she needed two scoring passes (eight points) over the Diamond Growlers to secure the win.

“The stars seemed to align and I got lead but needed to make it back around and through two more times than the opposition jammer,” Fordham said.

“They made their initial non scoring pass, by then I was up by one lap and starting to score.”

TRV blockers were able to hold up the Growlers’ jammer long and often enough to allow Fordham three scoring passes to their one, leaving TRV a point ahead as the final whistle blew, giving them their first ever win, 184-183.

“It seemed everyone was gunning for us in that moment. The crowd energy was what pushed me through,” Fordham said.

“That final jam and minutes afterwards will go down as one of my most memorable moments in derby.

“I am so proud of our teamwork and efforts, not just in this win but in every game we have played. This is what we have been working towards and in all these years we have never given up on our dream of winning.”

GLRD is now gearing up for the United Roller Derby Playoffs this weekend.

URDP is a mixed gender, national competition held in Melbourne over three days, attracting teams from across Australia and New Zealand.

GLRD has eight skaters participating, including Fordham, Tab Bennett of Glenmaggie and Roxy Smith of Loch Sport, who will play for The Mystery Rollers.