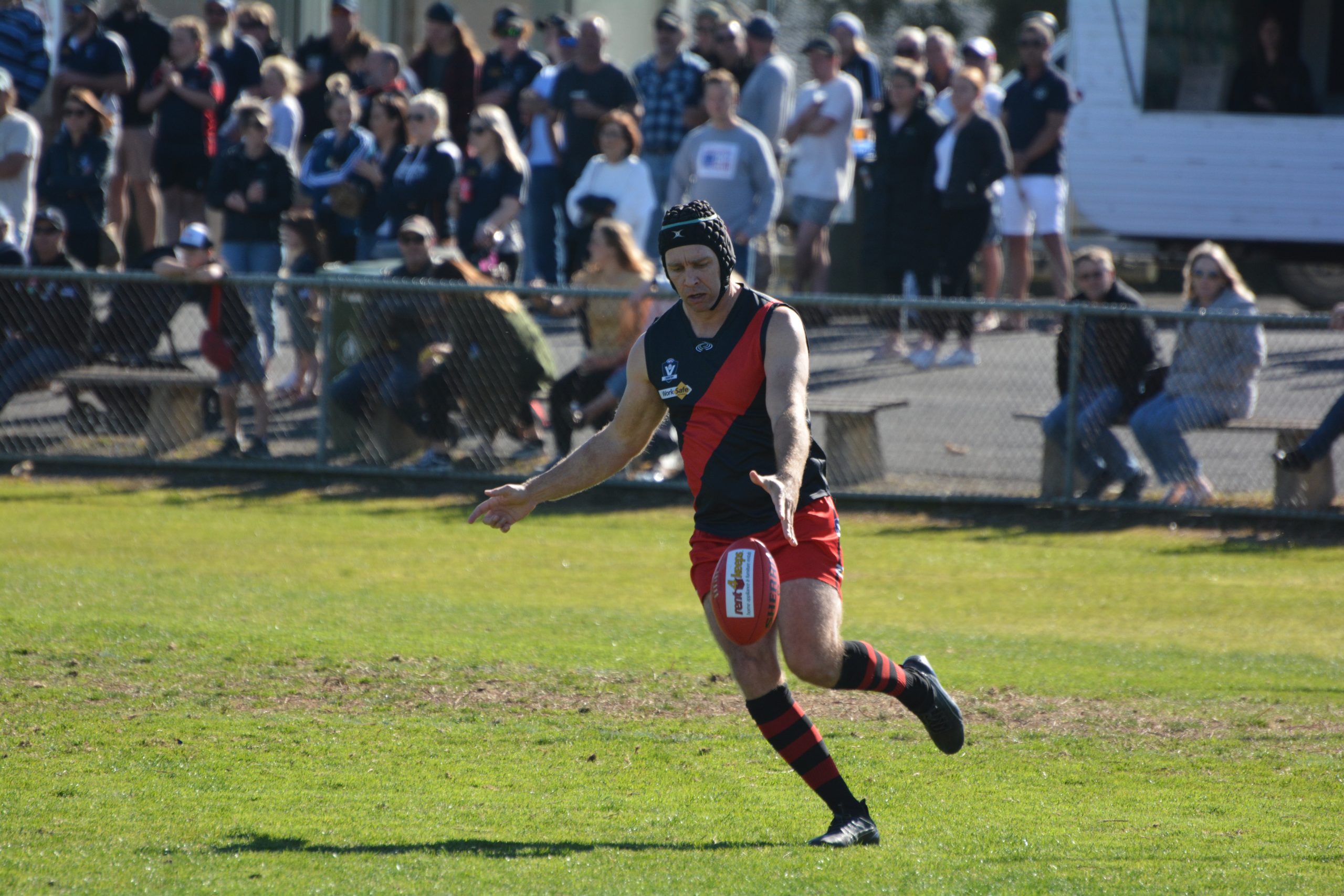 BOISDALE-BRIAGOLONG stormed into its first senior football grand final since 2001, and first in the East Gippsland league, after it defeated Lindenow 15.10 (100) to 9.8 (62).

Saturday’s second semi-final was the first final the Bombers had played in for 10 seasons, and it was just as long since they had sung the club song after the regular season.

Jubilant scenes welcomed all wearing red and black in the rooms following the victory, as all players, members and supporters came to grips with the fact the side, which has been the sentimental favourite all year, are now just one win away from capping off a memorable season.

The match began with neither side able to gain much of an edge in the early stages. Lindenow went into the first break with a slender six-point lead as the tenacity of both teams was telling.

The pressure was ramped up as the intensity of finals football came to the fore.

Both the Cats and Bombers had players with enough finals experience to know how to take things one step at a time, with Lindenow seasoned campaigners playing in their ninth consecutive finals series and Boisdale-Briagolong’s off season recruits from Maffra and Sale able to guide those who may have been feeling under the pump.

The Bombers really got going in the second quarter, and kicked seven goals to two to take a 26-point lead heading into the main break.

A goal from Daniel Stubbe gave the Bombers back the lead early in the second term before a Billy Marshall goal extended their lead to seven points.

After being awarded a free kick, Darren Allen kicked a goal to reduced the deficit to one point. Then the Bombers took control.

Hayden Burgiel kicked the ball to Josh Stubbe in a one-on-one contest.

Josh Stubbe soon had another goal after taking a mark on the lead.

Josh soon had a third after he gathered the ball from a contest and snapped a goal.

Good pressure in attack allowed Jordan Stubbe to kick a goal and extend the Bombers’ lead to 25.

Another goal from Josh put the Bombers 31 points in front, before Lindenow pegged a goal back late in the term.

With its tail up, Boisdale-Briagolong kept Lindenow to just one goal in the third quarter and extended the lead to 33 points at the final change of ends.

With a ticket in the grand final and a week’s rest on offer, the Bombers did not take the foot off the pedal, and closed out the game with four final quarter goals to Lindenow’s three. The final margin of 38 points signalled the first hurdle overcome for the Bombers, who will now go into the premiership decider full of confidence.

In the finish it was Boisdale-Briagolong’s dominant second quarter that set-up the victory, as well as the ability of the Bomber’s midfield to shut Lindenow play-maker Luke Dyer out of the game.

Boisdale-Briagolong ruckman David McKean was adjudged best afield, while Jordan Stubbe kicked five goals in a dominant display. It ended up being a good day out for the Stubbe’s, as Josh was prolific, kicking four and Daniel was also among the side’s best players.

The Cats will now play Wy Yung this Saturday with the winner to progress through to the grand final.

Lindenow only kicked one goal in the first half but piled on eight goals to three in the second to win by 13 points. The Cats will play the winner of Boisdale-Briagolong and Lucknow in the grand final.

THE undefeated Lakes Entrance went straight through to the under 17s grand final with relative ease, defeating Orbost-Snowy Rovers 17.10 (112) to 4.4 (28).

The Seagulls broke away after quarter-time to set-up their victory. The Blues will now play Wy Yung for the chance to meet Lakes Entrance again in just under a fortnight.