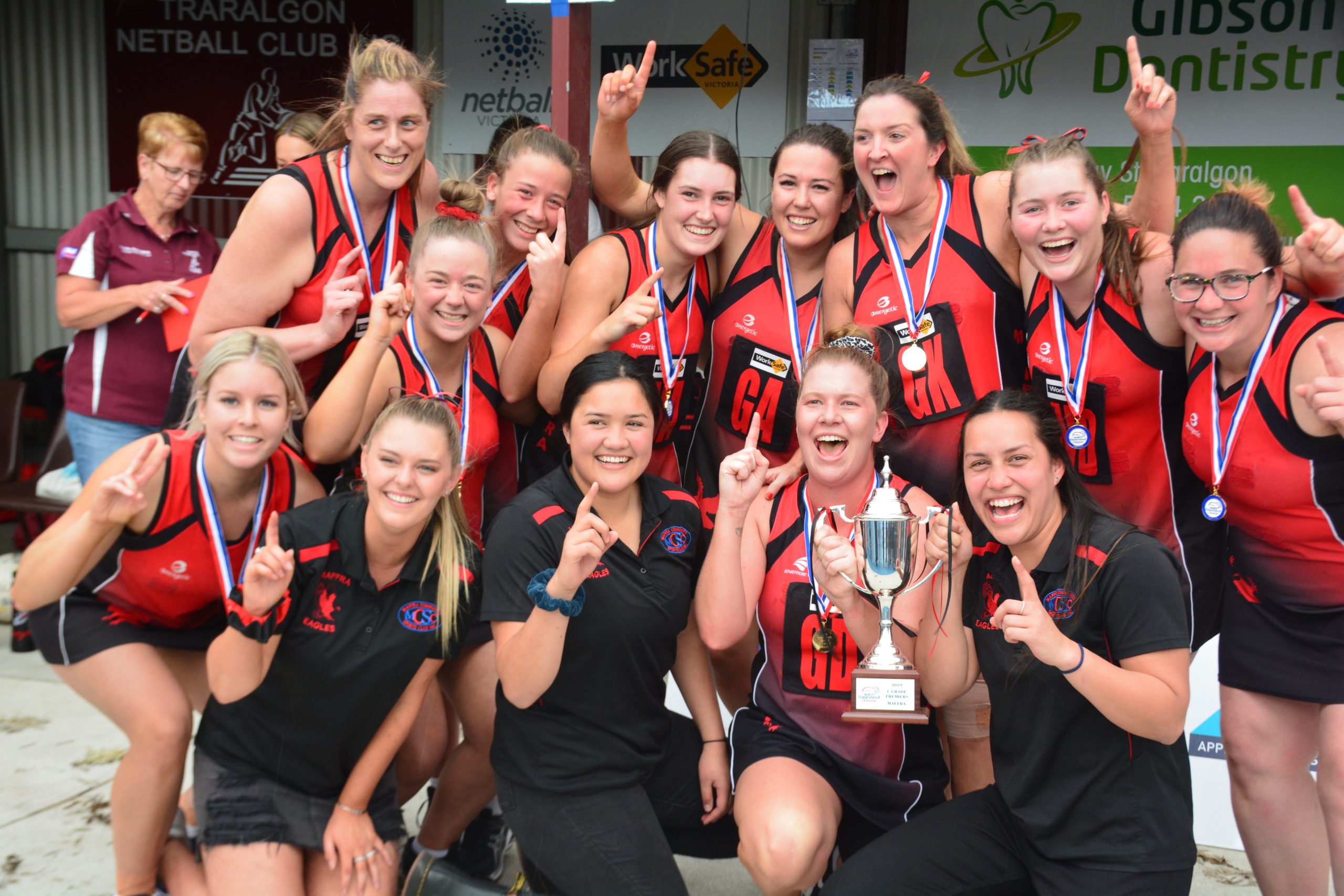 For the fourth consecutive year, Sale’s under 15 playing group faced Bairnsdale for the premiership.

With history and a minor premiership firmly on Sale’s side, it took the Magpies a few minutes to shirk the nerves that come with such heavy expectations.

After lagging by a few goals, Sale found its own pace – levelling the scores at quarter-time, 8-8, and acquiring a five-goal lead by half-time.

It was evident to spectators why each side had made the grand final, with players demonstrating skills well beyond their years, and athleticism more frequently spotted on an A grade court.

Sale co-captain Ruby Dillon’s finesse in goals, coupled with Charlotte Ronchi’s incredible accuracy, made it difficult for Bairnsdale’s defence to rebound – if there was anything to rebound at all.

The addition of goal shooter Olivia East to the Redlegs’ line-up really made a dint in the scoreboard, as the young goal shooter held beautifully in the ring and posed a challenge for the Magpies’ back line.

To combat this, coach Bernadette Dillon rotated her bench to facilitate fresh legs in defence, with a dipping pool of Abbi Boulter, Maya Bown, Alex Stephenson, Grace Tauschke and Tess Handsord to choose from.

Early on, any Bairnsdale turnovers triggered a particularly effective black and white zone defence, allowing Sale to pick off lobs and stamping out any hope of a Redlegs’ conversion.

Sale co-captain Indigo Waugh and Lilli Stobie were also outstanding for the Magpies through the midcourt, getting a hand to most balls and drumming up plenty of turnovers for the Pies.

Spots of rain matured into a blustery downpour, making conditions on court horrendous for shooters and slippery for everyone else.

Both teams enjoyed passages of play where it was difficult to stem momentum.

The game was still anyone’s at three-quarter-time, with a four-goal margin separating the teams.

In the final term, a turnover under Sale’s ring from Bairnsdale’s Ruby Timms gave the Redlegs second wind, and they closed to within a goal, trailing the Magpies 30-29 in the dying minutes.

In retaliation, a deflection from Bown in the Redlegs’ ring was snatched up by Boulter, putting the Magpies back into control, and giving them a critical conversion.

Waugh stemmed a Bairnsdale turnover to keep the ball up the Magpies’ end, as Dillon slotted a goal to bring the score to 32-29.

Bairnsdale scrambled to narrow the gap, with a goal through East, but it was too little too late.

Ronchi punched the last nail in Bairnsdale’s coffin, with a goal just before the final whistle, 33-30.

Bernadette Dillon said she was “absolutely over the moon”, given it was the playing group’s fourth premiership.

“We’ve got great depth in our bench – we can run and run and run, and we can play the whole game out … I knew if we had them [Bairnsdale] up in the last quarter, we’d keep that,” she said.

“Olivia [East] was great in goals – she’s definitely hard to track down, she had a great game [but] our defenders were amazing, they worked really hard all day.

“They changed it up, they didn’t just give up.”

Dillon named Waugh and Stobie as her stand-out players.

With silverware on the line, emotions swelled from the first whistle.

In a game with arguably more biff than the thirds on the adjacent oval, plenty of hits were taken on and off the ball. Even the crowd got involved, prompting an umpire’s warning to a particularly vocal section of the Gulls’ crowd, to welcome applause from Maffra’s corner.

The game was anyone’s, with only a few goals separating the two throughout the season – evident at the first change, as the Eagles led 9-8.

The Gulls sensed a foiled plot early, and made a crucial interchange – swapping their small but tenacious goal keeper Cindy Dawson, for height in Jessie Gleeson. The boost to Warragul defence worked immediately.

Gleeson posed a major issue in getting the ball into Maffra’s own beanstalk, holding shooter Anna Gaw, and put extra pressure on fellow Eagle Rachel

As the game wore on, tempers flared, physicality controlled play and stray elbows found connection, forcing the umpire to keep one eye on play downcourt, and bringing the ball back for a penalty when necessary.

In Maffra’s defence, Megg Fitt, Brooke Anderson and skipper Megan Raine put on a clinic – rebounding ably, and forcing the Gulls into rushed decisions with hands over every ball.

The Eagles managed to push the margin out to five goals by half-time, but by the third quarter, the Gulls had closed the gap to two.

In the final quarter, Maffra’s worst nightmare occurred, when the Gulls gained enough momentum to draw with the Eagles at 25-25, before pulling ahead by two goals.

Warragul captain and centre Grace Cant, who was named best-on-court, was a deadly weapon in the Gulls’ arsenal, tearing through Maffra’s defence with pace and athleticism to hit the top of the circle without fail.

A tense battle erupted as both teams became desperate to be the one in front by the final whistle.

Maffra tightened up play – converting turnovers and laying accuracy on thick in the ring – getting its confidence back.

After a quarter on the bench, a well-rested Raine took the opportunity to shine, getting a hand to every rebound and cradling turnovers through the midcourt, before handing it right back to the Eagles’ attack for conversions.

Edey stayed calm under pressure and managed to elude Monacella under the ring, while league best-and-fairest Tash Bedggood jetted through the midcourt.

The Eagles allowed the Gulls only two more goals in the final five minutes, but piled eight on itself, to make the score 33-29 at the final whistle.