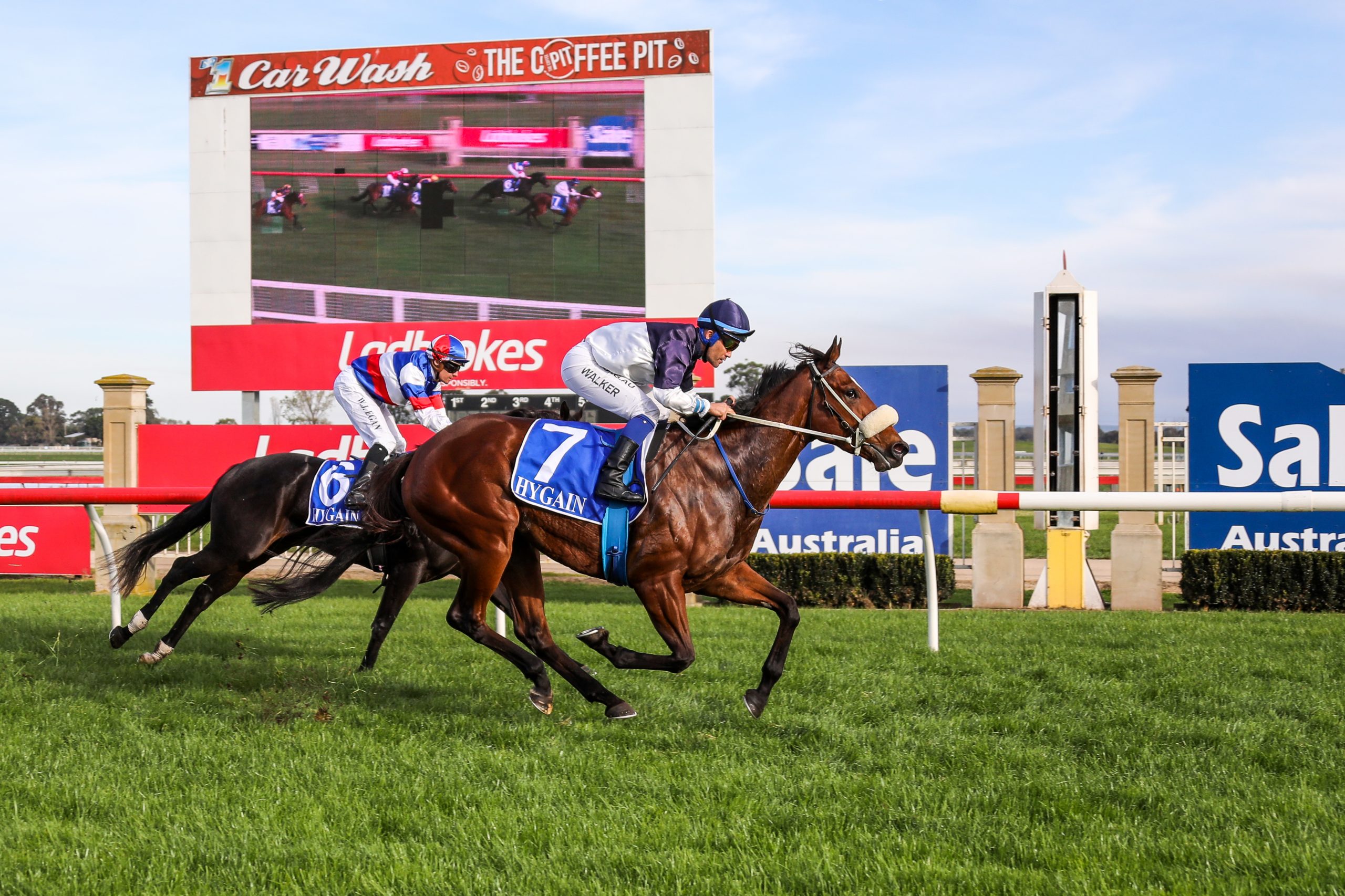 THE local racing community got behind Tuesday’s meeting at Greenwattle Racecourse.

Sale Turf Club committee members and staff stepped up to support the club and the racing industry by sponsoring all eight races.

Conditions favoured horses who preferred a softer footing. The track began the program rated “soft seven”, but was upgraded to “soft six” for race three.

Backers of favourites were rewarded, with the horses with the shortest price at the tote winning five races. Favourites placed in the other three races.

Highly Discreet got a good run behind Lady With Charm, trained by John Moloney at Caulfield and ridden by Daniel Stackhouse, and Night Of Delight, trained by Robbie Griffiths at Cranbourne and ridden by Noel Callow.

Highly Discreet finished strongly to win by a nose.

The first of the successful winners came in race two, a three-year-old maiden plate, also over 1112m.

Bless Her, trained by Shea Edan at Cranbourne with Jye McNeil in saddle, kicked in the straight and went unchallenged, winning by four lengths.

Payne and Egan combined to win race three, the 1421m maiden plate, with Does It.

The three-year-old gelding joined early leaders Red Lion, trained by Allison Sheehan at Cranbourne and ridden by Beau Mertens, and Equiwho at the front at the bend.

Does It and Red Lion moved away in the straight, with the favourite gaining the upper hand in the duel to win by three-quarters of a length.

Reset All, trained by Mark Webb and ridden by Brian Park, finished well to place third.

When Riverwood Girl kicked on the bend, the three-year-old filly answered the challenge in the straight and won by almost half a length.

The only Gippsland winner of the day came in race five, the 1738m class one handicap.

Three days after a second-placed finish at Moe, the favourite led from the start and won by three and a half lengths.

Avozinha, ridden by Dee and trained by Francis Finnegan at Cranbourne, finished second.

Lord Lennox, trained by Robbie Griffiths at Cranbourne and ridden by Matthew Allen, contested for the lead, but faded in the straight to finish third.

Ridden by Michael Walker, the three-year-old filly won by three-quarters of a length after moving to the middle of the track heading into the home straight.

The win came three weeks after Quantum Mechanic was pulled up with a heart irregularity last start.

Echo Boomer, trained by Payne and ridden by Egan, ran on the inside to on the fence to finish second.

Seafield Road, trained by Nick Harnett at Pakenham and ridden by Matt Cartwright, finished third just ahead of Unlimited Ability, trained at Sale by Wayne Walters and ridden by Kate Walters, which led early.

The field used the width of the track in the straight, with Lake’s Folly, trained by Anthony Freedman and ridden by Allen, going down the outside to win by two and a quarter lengths from Miss Belisa, trained by Mark Webb and ridden by Jade Darose.

Miroku, trained by Phillip Stokes at Pakenham and ridden by Luke Nolen, travelled along the rail to finish third.

Moi Choux notched up a third win from four starts with victory in the final race, the 1012m benchmark 54 handicap.

The three-year-old gelding, trained by Richard Laming at Cranbourne and ridden by Emily Brown, rocketed to the lead and remained on the inside of the track to win by almost two lengths.

Humzz, trained by Jamie Edwards near Geelong and ridden by Noel Callow, and The Executioner, ridden by Dee for Busuttin and Young, ran down the middle of the track finish second and third respectively.

The next meeting at Greenwattle will be on Tuesday, May 12.