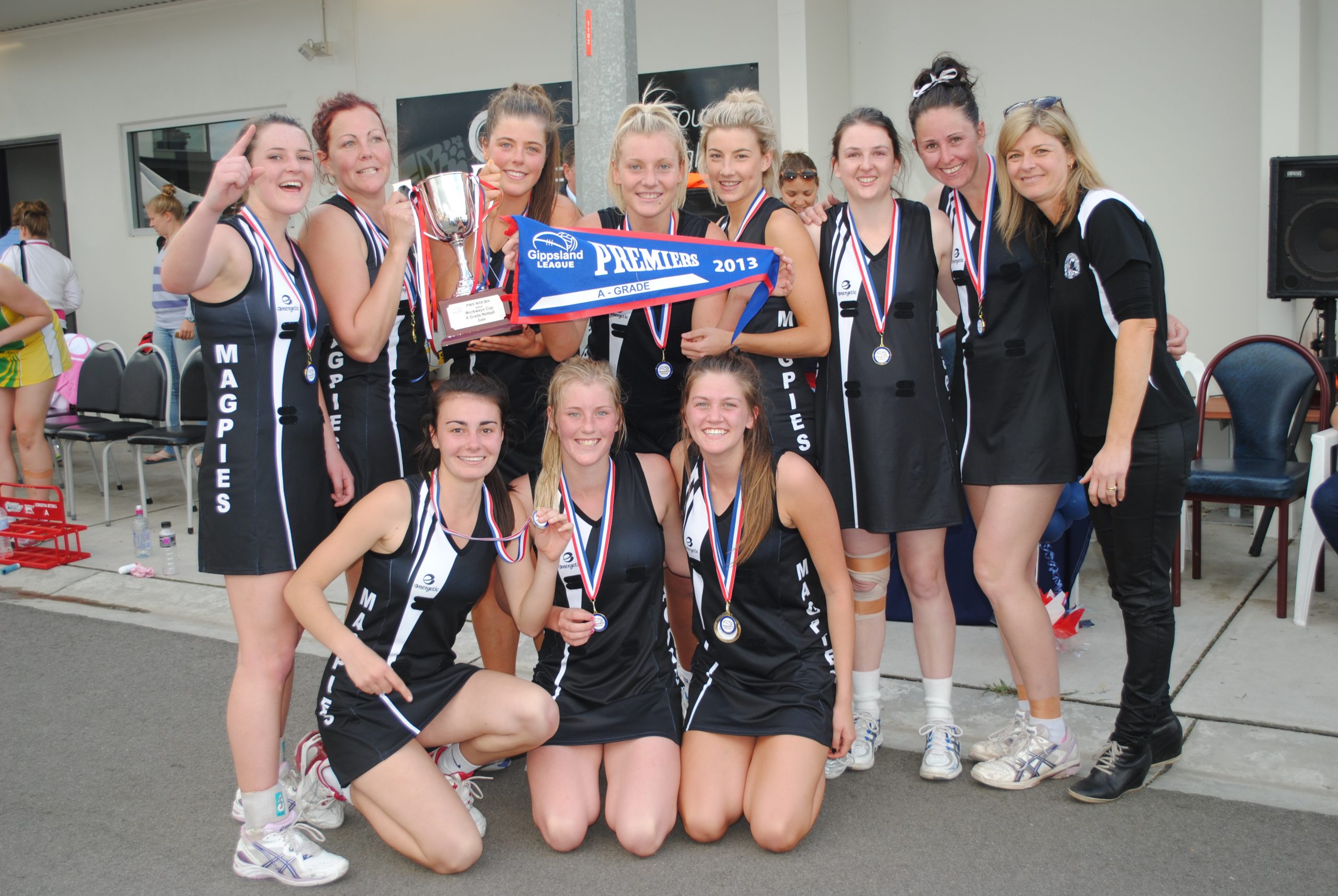 THE 2010s saw the standard of netball in the Gippsland League take big strides.

The commitment of clubs to netball also saw facilities improve drastically over the decade.

The 10 A grade premierships were split among six clubs, with Drouin winning three, Traralgon and Morwell two each, and Sale, Leongatha and Moe one each.

Warragul was the only club not to taste premiership success in any grade. In fact, the Gulls didn’t win a football grand final during the 2010s either.

At the beginning of the decade, the West Gippsland-Latrobe football league and netball association were formally under the same banner, becoming the Gippsland League.

It also began the 2010s with nine clubs. Garfield left for the Ellinbank and District league, while Wonthaggi Power joined. It saw the return of a team from Wonthaggi, as the Blues played in West Gippsland-Latrobe until 2004, when they merged with the Rovers and played in the Alberton league.

The Power enjoyed a good start in the Gippsland League, making the finals in its first four seasons.

After winning three WGLNA A grade premierships in the previous decade, Drouin claimed the flag in 2010 and 2011, years which also marked Maffra’s best years of the decade in the top division.

The Eagles finished third in 2010 and fourth in 2011. They also produced league best-and-fairest winners, Staci Scott and Caitlyn Morgan in those respective years.

In 2010, Leongatha lost two games to finish the home-and-away season on top of the ladder, a win ahead of Drouin. But it was the Hawks who were flying high at the end of the year, out-classing the Parrots 57-38 in the grand final.

Despite Traralgon claiming the minor premiership by two wins in 2011, the Maroons lost the grand final to Drouin 42-31.

The 2011 season saw the return of Bairnsdale, after 12 seasons in the East Gippsland league. The return of the Redlegs brought the league up to 10 clubs, eliminating the bye.

Sale’s best run of form in A grade began in 2012, the first of the Magpies’ three consecutive grand final appearances.

After finishing the home-and-away season in fifth place, only two points ahead of sixth, the Magpies fought their way into the grand final, where it lost to minor premier Leongatha 48-39.

After a season of 10 teams, A grade went back to nine for 2012, with Moe withdrawing its side. The Lions returned to the top grade in 2013.

Sale was the stand-out team of 2013, going through the year undefeated on the way to its first A grade premiership.

The Magpies claimed the minor premiership, three wins ahead of Leongatha.

They had to work hard for the premiership, defeating the Parrots by four goals in the second semi-final and two in the grand final after trailing by four at half-time. Defender Kate Eddy was best-on-court in the Magpies’ 44-42 grand final victory.

There were again only nine teams contesting A grade in 2014, with Warragul not fielding a side.

Morwell and Sale were stand-out teams.

While the Tigers were two points ahead of Sale after 18 rounds, the Magpies defeated them twice during the home-and-away season, and again in the second semi-final. The Tigers had the last laugh, winning the grand final 32-26.

With the competition back to 10 teams, Traralgon claimed its eighth A grade premiership in 2015, defeating Drouin 54-49 in the grand final.

Sale’s season ended with a loss to Morwell in the first semi-final.

Drouin return to the top in 2016, completing a strong season by holding aloft the silverware .

The Hawks lost one match for the home-and-away season, to Traralgon, who also defeated them by one goal in the second semi-final. The Hawks got their revenge on the Maroons, winning the grand final 56-46.

The decade’s second multiple Joe Hutchison medallist came in 2017, when Drouin’s Stacie Gardiner won, five years after her first win, when she was Stacie Proctor.

The 2017 season was almost a reverse of the year prior. Traralgon had lost one match during the regular season then lost to Drouin in the second semi-final, but defeated the Hawks 62-49 in the grand final.

Moe won its first A grade premiership in 2018, coming from third place on the ladder.

Losing the qualifying final, the Lions had to go the long way to the grand final, where they defeated Traralgon 52-50.

Both the Lions and Maroons defeated minor premier Morwell to make the premiership decider.

Morwell finished the 2010s as the A grade premier.

Losing one match, the Tigers claimed the minor premiership before losing to Traralgon in the qualifying final. The Tigers gained revenge in the grand final, winning by five goals.

Playing for Maffra, Holmes won the Joe Hutchison Medal for the third time.

Each of the league’s 10 clubs reached the A grade finals at least once during the 2010s.

Drouin took part in nine, with last year being the first season the Hawks failed to play beyond round 18 since the former Gippsland-Latrobe and West Gippsland leagues merged for the 2005 season. The Hawks had five grand final appearances for three premierships.

Morwell also appeared in the finals in eight seasons, victorious both times the Tigers reached the grand final.

Leongatha and Wonthaggi both played in five finals series, with the Parrots winning one of their three grand finals.

Maffra and Warragul reached the finals twice and Bairnsdale once.