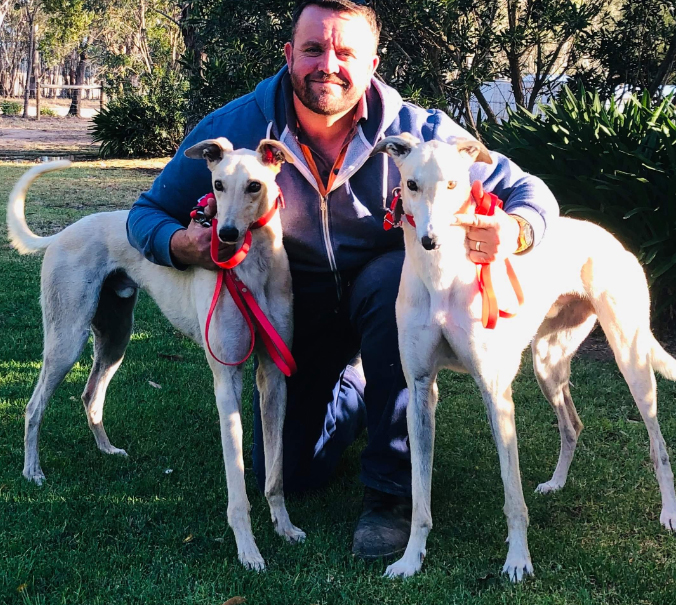 THE COVID-19 pandemic has temporarily robbed Briagolong greyhound trainer Matthew Clark of being hands-on with his champion greyhound Catch The Thief.

But coronavirus hasn’t stopped the 46-year-old being with him in heart, or the sensational sprinter from stealing the show – particularly in Perth during the past month.

Catch The Thief won the $32,000 WA Derby first prize, and will race in the Winter Cup final on Saturday night.

“I only realised it was still on four weeks before the event,” he said.

By that time, strict human biosecurity protocols banning interstate travel had been enforced meaning Clark was unable to accompany Catch The Thief across the Nullarbor for a WA Derby campaign.

Ironically, Catch The Thief won the $32,000 WA Derby first prize defeating Buster The Brute by 5.75 lengths, who is trained by Shinners’ partner Krystal.

His winning time of 29.32 seconds was only one length outside the 520 metre track record and he broke the second split record running 18.03s.

“This Perth assignment has been quite a long journey. Originally, he was only supposed to be there for three weeks,” Clark said.

“But after winning first up and then a week later winning a Derby heat in awesome fashion, Steve suggested we might like to consider leaving him another three weeks for the Winter Cup as there were no plans for him in Melbourne.

“Selfish me wanted to bring him home, but I had to do what’s best for the dog and his owner Louie Cardillo. So, I decided if he won the Derby, we would leave him.

“Steve and I have been mates since our teenage years … he’d already done a fantastic job and I had to pay due diligence to Louie, so in the end the decision was a no-brainer.”

Clark said he and Shinners talk daily and Catch The Thief is “doing super”.

There were only two heats of last week’s group listed Winter Cup, which surprised Clark.

“We drew the easier of the heats, although we met track record holder Campini,” he said.

“Steve also had Buster The Brute in the same heat. I felt a bit sorry for him as he’s preparing our dog knowing he can’t beat us on times.”

Clark added the track wasn’t as good compared to WA Derby final night, but he still broke the old sectional record down the back straight, running 18.14s, and recorded a 7.5 length win in a bestof- night 29.56s. It was his sixth win in a row and he’s now won 12 races from 19 starts.

“It’s a perfect scenario, as all I wanted to do was draw outside Tommy Shelby because he goes hard left towards the rail,” Clark said.

“He will fly home early in the week after the final and I’ll take him to Sydney 10 days later to trial for the Bob Payne Winter Stake, which is an age restricted series.

“He’s the best greyhound I’ve trained without a doubt … he has tremendous speed once he hits the ground and his middle section breaks the hearts of his opposition.

“But off the track he is just plain old ‘Ghosty’ to us. A kind, gentle natured pup who just loves to gallop in the paddock playing with his toys.”